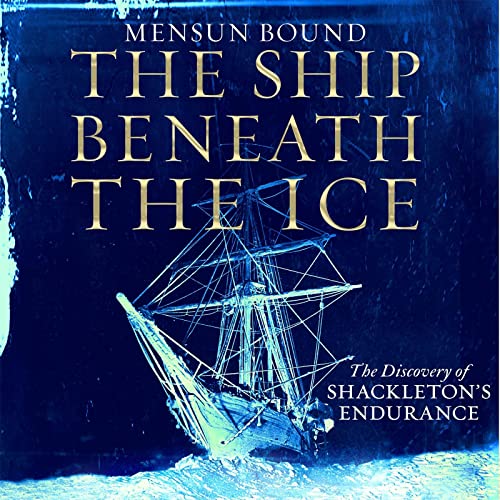 The Ship Beneath the Ice

The extraordinary story of how the Endurance, Sir Ernest Shackleton's ship, was found in the most hostile sea on Earth in 2022.

On 21 November 1915, Sir Ernest Shackleton’s ship, Endurance, finally succumbed to the crushing ice. Its crew watched in silence as the stern rose twenty feet in the air and then, it was gone. The miraculous escape and survival of all twenty-eight men on board have entered legend. And yet, the iconic ship that bore them to the brink of the Antarctic was considered forever lost.

A century later, an audacious plan to locate the ship was hatched. The Ship Beneath the Ice gives a blow-by-blow account of the two epic expeditions to find the Endurance. As with Shackleton’s own story, the voyages were filled with intense drama and teamwork under pressure. In March 2022, the Endurance was finally found to headlines all over the world.

Written by Mensun Bound, the Director of Exploration on both expeditions, this captivating narrative includes countless fascinating stories of Shackleton and his legendary ship. Complete with a selection of Frank Hurley’s photos from Shackleton’s original voyage in 1914-17, as well as from the expeditions in 2019 and 2022, The Ship Beneath the Ice is the perfect tribute to this monumental discovery.

"Bound has a natural flair for storytelling and his narrative cracks along with the pace of a well-crafted thriller... Captivating and engrossing." (Mail on Sunday)

"The story of Shackleton’s Endurance is one of the most extraordinary in the history of exploration. This is more than just an astonishing sequel. It is a tale just as powerful, and one which redefines the meaning of impossible." (Sir Michael Palin)

"The juxtaposition of the original Shackleton expedition with the quest to find the wreck of the Endurance is utterly compelling." (Professor Alice Roberts, Sunday Times bestselling author of Ancestors and TV Presenter)

What listeners say about The Ship Beneath the Ice

Fantastic daily accounts of the events leading up to that historic dain March 2022. You develop a bond with the crew, the ice and indeed Shaklton himself through his thoughts and poetry. Shackleton is an inspiration to us all who endeavour to conquer.

This is an amazing absorbing account of Antarctic archaeology and perseverance, beautifully written and well worth your time. Just undone by a glib and upbeat voice that is sadly unsuited to the content.

It reduces a story that is engaging, and at times harrowing to a 90’s PowerPoint presentation. This author deserves better than this. The publisher should have asked that he read it himself, as the forward is the only part read with any genuine feeling.

Buy, but buy a paper copy and enjoy it.

Fabulous account of an interesting search. Dropped one star for the weird phrasing of the narrator in parts, but didn’t spoil the adventure.

If you have any interest in Sir Earnest Shackleton at all, then this book is a must for your collection. Mensun Bound brilliantly describes his search to find the wreck of the Endurance with references to what happened in Antarctica over 100 years ago. Audible presentation was first class.