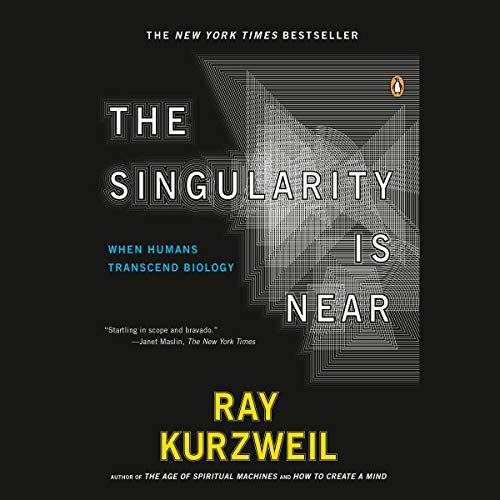 The Singularity Is Near

“A pleasure to read.” (The Wall Street Journal)

A radical and optimistic view of the future course of human development from the best-selling author of How to Create a Mind and The Singularity is Nearer who Bill Gates calls “the best person I know at predicting the future of artificial intelligence”.

For over three decades, Ray Kurzweil has been one of the most respected and provocative advocates of the role of technology in our future. In his classic The Age of Spiritual Machines, he argued that computers would soon rival the full range of human intelligence at its best. Now he examines the next step in this inexorable evolutionary process: The union of human and machine, in which the knowledge and skills embedded in our brains will be combined with the vastly greater capacity, speed, and knowledge-sharing ability of our creations.

“Anyone can grasp Mr. Kurzweil’s main idea: that mankind’s technological knowledge has been snowballing, with dizzying prospects for the future. The basics are clearly expressed. But for those more knowledgeable and inquisitive, the author argues his case in fascinating detail.... The Singularity Is Near is startling in scope and bravado.” (Janet Maslin, The New York Times)

“Filled with imaginative, scientifically grounded speculation.... The Singularity Is Near is worth reading just for its wealth of information, all lucidly presented.... [It’s] an important book. Not everything that Kurzweil predicts may come to pass, but a lot of it will, and even if you don’t agree with everything he says, it’s all worth paying attention to.” (The Philadelphia Inquirer)

“[An] exhilarating and terrifyingly deep look at where we are headed as a species.... Mr. Kurzweil is a brilliant scientist and futurist, and he makes a compelling and, indeed, a very moving case for his view of the future.” (The New York Sun)

What listeners say about The Singularity Is Near

I really wanted to listen to this, but I can't tolerate the modulated voice. It sounds like someone was trying to "enhance the dynamics" or some such thing. Natural changes in volume within each word are artificially exaggerated. The constant, rapidly changing levels actually makes me slightly nauseated.

I could not listen to this audiobook because the narrator sounds like a robot.

predictions made that had already been missed by the time of the audio version release. don't waste your time

Despite having been written in 2005, The Singularity is Near has plenty of relevant food for thought to chew on. As a neuroscience major with a sub-interest in AI I found myself frequently marveling at the accuracy with which Kurzweil made his predictions referring to the 20s and 30s and the way that computation and brain research would end up marrying in order to produce a more complex understanding of our brain and nervous system. With such projects as the NeuraLink, among other BCI tech in development, the data we're due to receive on the brain will be staggering, and with machine learning to help sort the data the application of that knowledge will be astounding.

This was a fun book to mull over and I definitely recommend it, because the predictions are interesting for modern comparison.

Insightful, its 2020 and this book is on the money with what's happening TODAY.
Must read.

one of the best and deepest read ever

I found this book while looking for it's sequel "the Singularity is nearer", which hasn't been published on audible yet. I'm glad I purchased it anyway, as the book is still relevant and impressive today. Ray seems to master an impressive array of science subjects, from IT to physics, biologics and mathematics. The depth of his reasoning increases from chapter to chapter and ends up mixing with philosophy.

Definitely tricky to get through. Ray is unbelievably intelligent. I'm very anxious for the future.

Interesting book for AI and IT progress admirers

The faith in AI and IT taken to a great level with very valuable insights and predictions of a breakthrough in Computing and AI evolution where the non biologycal intelligence will grow so much faster and exponentially that it not only will be prediminant but will be omnipresent and omniscient in our daily lives. Mankind will leave the biological World to become the first hibrid and bionic Being.
This event is named The Singularity by Kurtzweil, that is so optimistic that even believes that Machines may become conscious, for which there is no scientific evidence yet that may be a possibility!

His thoughts on the future of the evolution of our species are, to me as important as the science fiction writers of early technology. Was it 100% correct, no, but these are best educated guess that technology has to offer. Great listen

Kurzweil has a time machine

Mind blowing revaluations of things that have come to fruition and aspirations for the future. Way ahead of his time!