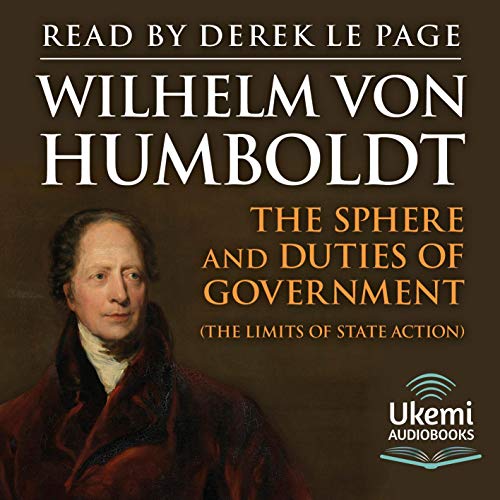 Wilhelm von Humboldt (1767-1835) now lives under the shadow cast by his more famous brother Alexander von Humboldt (1769-1859, naturalist, explorer, geographer and much else), but Wilhelm was an important figure in Prussian-German history in his own right. He contributed considerably through his work as a diplomat, educationalist (he was one of the principal founders of the Humboldt University of Berlin), philologist and linguist. Yet The Sphere and Duties of Government (originally titled The Limits of State Action) has proved to be one of his most enduring legacies. It dates, surprisingly, from 1791, which explains its comparatively youthful sense of idealism and its overtly liberal stance, which countered the existing stifling political and social views.

This is why it was never published in his lifetime, and only appeared in 1852 when Alexander, realising its importance, arranged for its publication. The purpose of the work, as Wilhelm von Humboldt expressed in his introduction, was ‘to discover the legitimate objects to which the energies of State organisations should be directed and define the limits within which those energies should be exercised’. Humboldt’s views and works became an important source for John Stuart Mill’s better-known work On Liberty which appeared in 1859 - five years after Humboldt’s book first appeared in English.

In short, the fundamental view of both was that the functions, and limits of government interference, were to be defined by ‘the prevention of harm to others’. This was a liberal view in the mid-19th-century world of Mill, but revolutionary in the closing decade of the 18th century. Humboldt considers his general topic in 16 chapters, beginning with the crucial overview: ‘Of the individual man, and the highest ends of his existence.’ He pursues his theme through ‘the solicitude of the state for the positive welfare of the citizen’, his personal security and his security ‘against foreign enemies’. He scrutinises subjects such as religion and ethics, the exercise of the judiciary and the role of punishment; and he even examines the welfare of minors and the less able. He concludes with the ‘practical application of the theory proposed’. As such, The Sphere and Duties of Government is an absorbing and questioning listen, and just as relevant today as controversy rages over the role and application of democracy versus other 21st-century forms of government, such as communism, totalitarianism, religious fundamentalism and those based on outright dictatorship.

What listeners say about The Sphere and Duties of Government