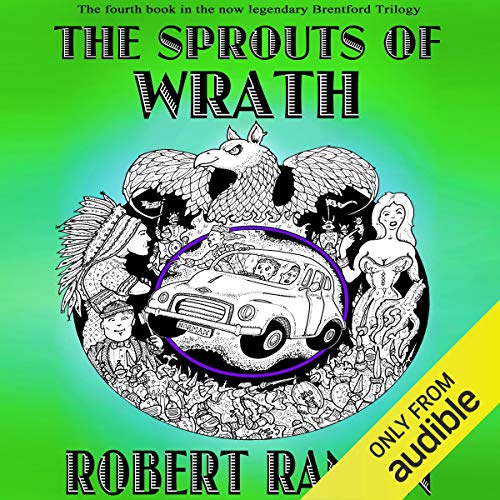 For those listeners who are used to Robert Rankin, you will not be surprised to know that The Sprouts of Wrath is hilarious. Those of you who are new to Rankin: it won't take you long to find out. The listener is instantly transported to the West London town of Brentford. Here, the Town Council votes to host the Olympic Games. What follows is a laugh-out-loud series of adventures as the town prepares to host the event. Rankin is a master performer. The listener will not be able to resist his charm.

Amazing, but true: Brentford Town Council, in an act of supreme public-spiritedness (and a great big wodge of folding stuff from a mysterious benefactor) has agreed to host the next Olympic Games. The plans have been drawn up, contracts, money and promises are changing hands. Norman has designed some stunning kit for the home team, and even the Flying Swan's been threatened with a major refit (gasp!).

But something is very wrong... primeval forces are stirring in ancient places... dark magic is afoot in Brentford and someone must save the world from overpowering evil......Jim Pooley and John Omally, come on down! This must be the daring duo's toughest assignment yet. No longer can they weigh up the situation over a pint of large at random moments during the day.

No, this time, to save the world as we know it, the lads must contemplate - nay, undertake - the most horrible, the most terrifying, the heretofore untried - regular employment!

Robert Rankin describes himself as a teller of tall tales. The Morning Star describes him as 'The Master of Silliness', and his publisher describes him as The Master of Far Fetched Fiction. He is the author of more than 30 novels, of which he has sold millions of copies, and he makes people laugh around the world. Robert loves going on tour, signing books for readers, and his appearances at signings and conventions are legendary, often including a stand-up routine, a song (accompanied by his 'air-ukulele'), and an always-entertaining question-and-answer session.

"Stark raving genius...alarming and deformed brilliance" ( Observer)
"He becomes funnier the more you read him." ( Independent)
"Everybody should read at least one Robert Rankin in their life." ( Daily Express)
"One of the rare guys who can always make me laugh" (Terry Pratchett)
"To the top-selling ranks of humorists such as Douglas Adams and Terry Pratchett, let us welcome Mr Rankin" (Tom Hutchinson, The Times)

What listeners say about The Sprouts of Wrath

On form with the rest of the series. Looking forward to getting the next one

Would you consider the audio edition of The Sprouts of Wrath to be better than the print version?

Yes, I enjoy Rankin's narration it brings an extra something to the the tale.

As ever the interaction between Pooley and Omalley, the genuine friendship between them.

Which character – as performed by Robert Rankin – was your favourite?

Pooley. There seems to be a genuine affection for the character from the author.

At nearly 9 hours I couldn't but if I had the time I would be happy to.

I know some people have not been as positive about this book as some of Rankin's other work but i felt it was up to his usual standard. The recurring characters of Neville, Norman and the triumvirate of the Professor, Pooley & Omalley are joined by the Geronimo brothers as personal favourites of mine. For what it is worth I think this is another piece of excellent silliness on Mr Rankin's part.

Just another fantastic book by Rankin

you need to like Rankin, but if you do you will love it. you don't need to read the other books first but it will help.

Mr Rankin at his best

a fun take of good versus evil

A fun little tale played out in Brentford of yesteryear. all the favourite Rankin characters and well read in the right tone.