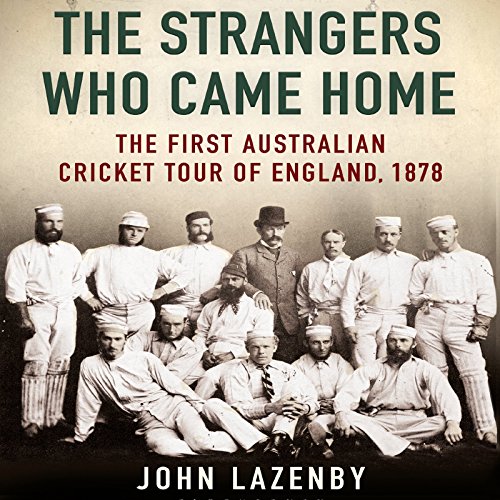 The Strangers Who Came Home

The Ashes cricket series, played out between England and Australia, is the oldest and arguably the most keenly contested rivalry in international sport. Yet the majority of the first representative Australian cricket team to tour England in 1878 in fact regarded themselves as Englishmen. In May of that year, the SS City of Berlin docked at Liverpool, and the Australians stepped onto English ground to begin the inaugural first-class cricket tour of England by a representative overseas team.

As they made their way south toward Lord's to play the MCC in the second match of the tour, the intrepid tourists, or "the strangers", as they were referred to in the press, encountered arrogance and ignorance, cheating umpires, and miserable weather. But by defeating a powerful MCC side that included W.G. Grace himself in a single afternoon's play, they turned English cricket on its head. The Lord's crowd, having openly laughed at the tourists, wildly celebrated a victory that has been described as "arguably the most momentous six hours in cricket history" and claimed the Australians as their own.

The Strangers Who Came Home is a compelling social history that brings that momentous summer to life, telling the story of these extraordinary men who travelled thousands of miles, risking life and limb, playing 43 matches in England (as well as several in Philadelphia, America, on their return journey) during a demanding but ultimately triumphant homecoming; how their glorious achievements on the field of play threw open the doors to international sports touring; and how these men from the colonies provided the stimulus for Australian nationhood through their sporting success and brought unprecedented vitality to international cricket.

What listeners say about The Strangers Who Came Home

This is not about the formation of the Ashes, rather it is about the very first tour of an Australian team to England. it is a really detailed history.

Where does The Strangers Who Came Home rank among all the audiobooks you’ve listened to so far?

Possibly top 5. It's not my greatest purchase due to its specificity but it's superb!

What other book might you compare The Strangers Who Came Home to and why?

Perhaps "The Pixar Touch". James Lilywhite, although English and a rival, played an integral part in bringing the Australian team to England and to what would be legendary prominence. In "The Pixar Touch", The team behind Pixar at one point included a founder of rival animation company "Dreamworks", Jeffrey Katzenberg, but in the same way this elevated Pixar as they battled Dreamworks for Animation supremacy as The Australians battled English teams for respect towards Australian cricket.

Which character – as performed by Jonathan Coote – was your favorite?

Probably Fred "the demon" Spotheff(spellcheck) because the thought of such a vicious presence in a "gentleman's sport" was fascinating and exciting to me.

Yes, the description of the major injuries suffered by the Australians in-match made me cringe. That was mindboggling.

A great listen for any cricket fan!

This is a delightful book. It's a wonderful portrait of international cricket in its early days. We see the way the noble game was played in the 19th century. Lazenby does a great job of bringing the people, places and events alive. There's plenty of color for the non-cricket fan as well and I think this book would appeal to anyone interested in Victorian England. The charm of this book is greatly enhanced by the fantastic narration of Jonathan Coote. He does a wonderful job and does a separate distinct accent for each of the characters.

I hope US Audible will have more of this type of social history dealing with cricket.

in depth history of Australians early tour to UK . Well read and easy to follow. Would recommend for any cricket enthusiast.

This is one of the best stories I have ever heard. If you don't even like sport it's still a great listen.