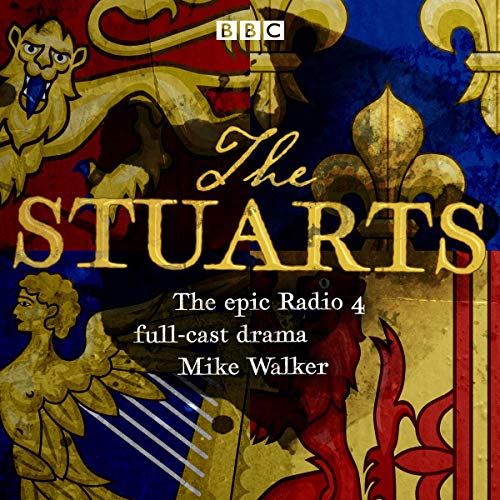 Under the Stuarts, Britain entered the modern world. But with great change came turmoil, and for 111 years, the Stuart monarchs faced dynastic struggles, religious conflict, the rise of parliamentary democracy - and civil war. These dramas chart that turbulent epoch through its royal family, from Mary, Queen of Scots to the ‘last Stuart’, Bonnie Prince Charlie’s daughter Charlotte.

It Came In with a Lass - 1561. Arriving in mist-shrouded Scotland, Queen Mary must quickly distinguish her friends from her enemies. Starring Jeany Spark as Mary.

To Make the Plough Go Before the Horse - James I’s life and reign told through his relationships, from his first love, Esme, to his last favourite, George Villiers. Starring Bill Paterson as James I and VI.

A World of Fools and Knaves - Henrietta Maria, Charles I's Catholic queen, watches her husband fail to keep hold of the reins of government. Starring Julian Rhind-Tutt as Charles I.

This War Without an Enemy - Only on the morning of his execution can Charles I begin to understand the events that brought him to to the scaffold. Starring Julian Rhind-Tutt as Charles I.

James II: The Storms of this Deceitful World - 1688. After just four years as King, James II flees England in the Glorious Revolution. How did it all go so wrong? Starring James Fleet as James II.

William III and Mary II: To Have and to Hold - Dutch William marries his Stuart cousin for reasons of politics, not passion - but their partnership proves crucial when it comes to ruling England. Starring Mark Edel-Hunt as William III and Elaine Cassidy as Mary.

Bonnie Prince Charlie: Who Dares to Be Free - Charles Edward Stuart, the ‘Young Pretender’, risks everything for the Stuart name. Starring Blake Ritson as Charles.

Well worth buying, as were the Plantagenet series (also by Mike Walker) 5* for the story.

This is a fantastic collection of dramas covering the Stuart era from start to finish, bringing to life all the well known & important characters of this era who dominated one of the most complex times in British history. For just one credit for ‘eleven’ plays this is a bargain and one collection of plays that I will be listening to many times.

No one does dramatisations like the BBC. The quality of actors, production and stories made the entire sage rivetting.

A great opportunity to learn more intimate details about these famous and not so famous monarchs, their lives, motivations and the dubious cast if characters that surrounded them.

Well worth a long, relaxed, listen.

A great series. I would recommend this to anyone interested in this period of history

Overall I enjoyed this series of dramas, However, I've read a great deal about William III and Mary II and I noticed a number of errors in their drama and I imagine there were an equal number in the other dramas. Let me give some examples: First, when William was adopted by the province of Holland at age 15, Bentinck was the only member of his old household who was allowed to stay with him. Second, he and Bentinck were in their mid-twenties when they had smallpox, not teenagers,. Finally Mary died of smallpox not just a fever and William did not die of a broken collar bone—he died of pneumonia as his autopsy makes plain. His deathbed is totally wrong but I understand why it was written that way since the writer wants to portray William as an enigma. However, the scene where he is playing the harpsichord and singing is hilarious since he is known to care little for music. Still overall the series is excellent.

do your homework first

Great traditional radio 4 play but limited by lack of historical detail. Makes you want to find out the essential plot details which is obviously a good thing.
Uses modern day conversation style which can trivialise some important historical characters and events.

If you loved the Plantagenets

After purchasing and enjoying Mike Walkers the Plantagenets I decided my next purchase would be The Stuarts. I was not disappointed

Its like watching a TV programme in your head - really good narration and a fabulous retelling of known stories to make them engaging and memorable. Bought Plantagenets and Tsars by Mike Walker as well and they are just as fantastic. Love history told this way.

The other royal dynasty

Tudors are overdone. Stuarts aren’t just Mary, Queen of Scots and Charles I!
Unfortunately the early Stuarts (up to James V) aren’t included, as their lives and times were just as turbulent and contradictory.
This series of plays, though all written by the same author, have varying formats. I see a few instances of dramatic licence and naturally there is selection of the events covered - no reign could be fully recounted in a play of one hour. Good acting as expected from BBC Radio drama.