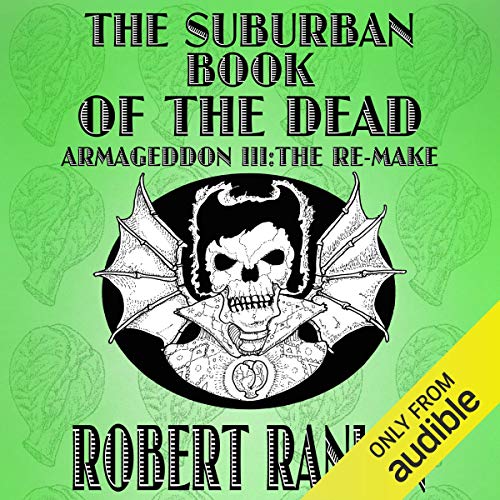 The final novel in the Armageddon Quartet and arguably the best of the three.

Fast, frantic, and furiously paced - and introducing the now legendary Lazlo Woodbine, 1950s genre private eye. The host of stars include Harpo/Chico the two-headed lovechild, Barry the time-travelling Brussels Sprout, Elvis Presley in his greatest role ever, and Rex Mundi, who still bears an uncanny resemblance to a young Harrison Ford. The action takes place in Presley City, the world’s single surviving metropolis, where Rex finds himself trapped only days away from nuclear destruction.

The world is not as it should be. The Bible prominently features Elvis. Lazlo Woodbine is convinced that he is the hero of the book and Barry knows for certain that he is! Rex keeps getting mistaken for the Antichrist, and this is seriously spoiling his chances of getting his end away with the gorgeous Laura Lynch (played apparently by Lady GaGa).

If you had any questions to ask after listening to the first two books in this series, all will be answered in this one. Or, if not exactly answered, then not answered.

The Suburban Book of the Dead is a study in controlled chaos and a masterpiece in the genre of Rankin’s own creation, Far-Fetched Fiction, and it is strongly recommended that you listen to the other two books first to have the remotest chance of understanding what is going on.

Robert Rankin describes himself as a teller of tall tales. The Morning Star describes him as 'The Master of Silliness', and his publisher describes him as ‘The Master of Far Fetched Fiction’. He is the author of more than 30 novels, of which he has sold millions of copies, and he makes people laugh around the world. Robert loves going on tour, signing books for fans, and his appearances at signings and conventions are legendary, often including a stand-up routine, a song (accompanied by his 'air-ukulele'), and an always-entertaining question-and-answer session.

"Stark raving genius...alarming and deformed brilliance.” (Observer)
“He becomes funnier the more you read him.” (Independent)
“Everybody should read at least one Robert Rankin in their life.” (Daily Express)
“One of the rare guys who can always make me laugh.” (Terry Pratchett)
“To the top-selling ranks of humorists, such as Douglas Adams and Terry Pratchett, let us welcome Mr Rankin.” (Tom Hutchinson, The Times)

What listeners say about The Suburban Book of the Dead