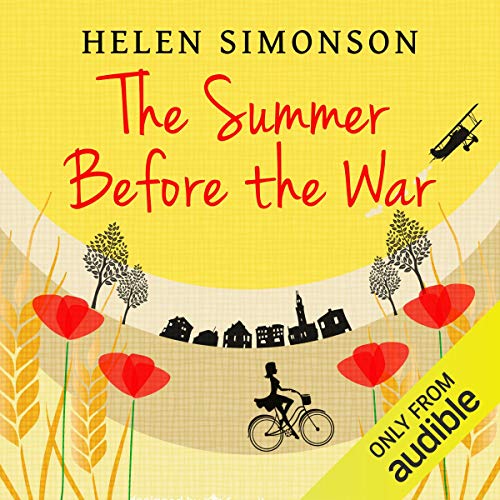 East Sussex, 1914. It is the end of England's brief Edwardian summer, and everyone agrees that the weather has never been so beautiful. Hugh Grange, down from his medical studies, is visiting his aunt Agatha, who lives with her husband in the small, idyllic coastal town of Rye.

Agatha's husband works in the Foreign Office, and she is certain he will ensure that the recent sabre rattling over the Balkans won't come to anything. And Agatha has more immediate concerns; she has just risked her carefully built reputation by pushing for the appointment of a woman to replace the Latin master.

When Beatrice Nash arrives with one trunk and several large crates of books, it is clear she is significantly more freethinking and attractive than anyone believes a Latin teacher should be. For her part, mourning the death of her beloved father, who has left her penniless, Beatrice simply wants to be left alone to pursue her teaching and writing. But just as Beatrice comes alive to the beauty of the Sussex landscape and the colourful characters that populate Rye, the perfect summer is about to end.

For despite Agatha's reassurances, the unimaginable is coming. Soon the limits of progress and the old ways will be tested as this small Sussex town and its inhabitants go to war.

What listeners say about The Summer Before the War

Another compelling and moving story from Simonson

Having LOVED Major Pettigrew, I was a little nervous that this wouldn't live up to the high standards set in that opus. Don't worry - its (nearly) as good! Just a shade 'off' the Major, but completely compelling. Indeed, listening to this on holiday, I landed up as a sobbing mass on my sunlounger - always embarrassing when that happens.

I loved the characters, and the narration was excellent - the story deftly captured the atmosphere not only 'before the war', but catapulted the listener into the agonies of the war itself. Highly recommended, Simonson is an excellent storyteller.

For me Simonson has a powerful way of expressing social norms and behaviours through her appealing characters and within the context of her novels' settings. This book provides a snapshot of gender/social/class/ethnic-related prejudices at the beginning of the 20th century and shows how the characters tussle with social expectations and their own emotional needs. The strength of upholding honour and duty and the desperation of oppression, abuse and limitless yearning of motherhood are beautifully observed. Dialogue between characters is highly believable and often amusing. Reading this book was a journey which resonated strongly with the world's continued human plight. Thank you Helen Simonson.

What did you like most about The Summer Before the War?

It is a slow burner, by chapter six I was wondering where the story was going and if indeed it was worth continuing with. I am very pleased that I did. It is a thought provoking, enjoyable listen.

Snout, Hugh and Daniel, they felt the most real and rounded characters to me.

What aspect of Lucy Scott’s performance might you have changed?

Her reading was rather flag and her voices for the male characters and more unpleasant lady characters too similar.

Another beautifully written story by Helen - this wartime story evoked the war like no other I have ever read.

This wartime story is superb. So much more than a wartime drama. Deeply touching and impossible to put down.

A slow burner, but holds your attention

This Story is told clearly and slowly as in the time it is set. You may get bored or not, but I urge to carry on because as the story unfolds in the final few chapters, the whole story becomes so very moving. This I did not expect, but it is so very right for this book. This story tells of the pettiness and injustices of the social Class system at the time, set in a seaside town. You hear of the gross blunders of war and the catastrophic arrogance of those giving orders. A love story unfolds. Maybe to some this is predictable, but I can only give my opinion.

Beautifully narrated, by Lucy Scott. Like her other book "Major Pettigrew" Helen Simonson has written another gem of a book.

This was an easy going, easy listening story .... Until the last 2 hours. At which point, after many hours of a slightly tepid story line, the drama ramps up and I was gripped.
There is some brilliant descriptive narrative and character creations. However, it was more of a 'back ground chatter' when listening in the car for many miles than a riveting drama.

Good evocation of the endless summer of 1914

This is a story about class, morality and the changing role of women in the early twentieth century. The coming of the first world war changed everything for the people of Rye in Sussex.

The book is a charming evocation of an end of an era, and a great story about the impact of these changes on a number of families. The gentle life of the town and the early enthusiasm for the war contrasts with the horrors of the front and the changing attitudes of the women left at home.

The story is well narrated and well worth listening to.

Would you consider the audio edition of The Summer Before the War to be better than the print version?

I should imagine both are of equal value

What other book might you compare The Summer Before the War to, and why?

The characterisation is excellent and the twist involving the subjugation of women is very interesting. The tension mounts as war rumours rumble. However, it is the predicament of the heroine, Beatrice, as a spinster; intelligent, capable and of great moral stamina, that makes one realise just how disadvantaged women were, how their abilities were overlooked and how their contributions to the world were sorely underrated.

I really enjoyed this delightful book, beautifully read and, like Helen's other novels, it kept me entertained from start to finish.

What did you like most about The Summer Before the War?

I was interested in the depiction of the way of life around the time of the Great War.

No. The narration was an obstacle to enjoyment. I lost count of the number of mistakes in pronunciation throughout the book. If this reader could place the emphasis on the wrong syllable in a phrase then she did so! She clearly was not reading ahead and understanding what she was reading.

Yes. I found it trite and unsubtle.

In retrospect I am sorry I wasted my time on this book. I had quite enjoyed Major Pettigrew's Last Stand and wanted to try another by the same author but I won't be bothering with any more.

This story was 'fine'

Great performance from Lucy Scott to turn a so-so story into one I managed to listen to for 15+ hours. The story line was predictable - particularly the ending - and the 'action' was a long time coming. The last 1/3 of this book was the better part. Recommended if you're after an easy 'listen'

A beautifully told story telling of the horrors not only of war but of humankind.

I enjoyed this sad story of how ear affected one group of people and brought out their characteristics both good and bad consistent with the era.

Condensing would have improved this book

I found the characters of this novel engaging. The story line at times plodded along and would have benefitted from some editing.

Not a story with an ending you want for all characters but able to draw me in with feelings of emotion for both their misery and happiness.