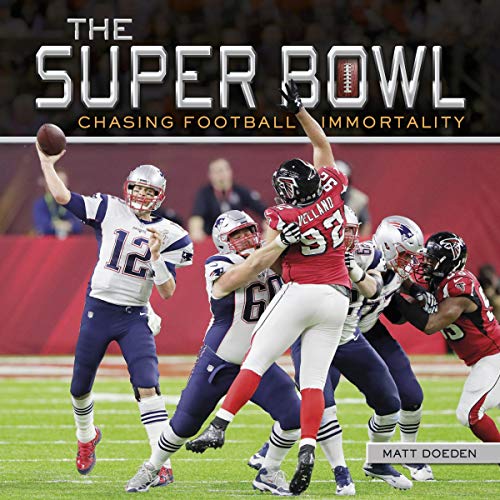 The National Football League (NFL) is the most popular sports league in the United States, and the Super Bowl is its grandest stage. The incredible runs, the gutsy defensive stands, and the game-winning touchdown throws are all here. Award-winning sports author Matt Doeden explores the history of the Super Bowl and covers the championship game's greatest moments, from Vince Lombardi leading the Green Bay Packers to victory in Super Bowl I to Tom Brady and the New England Patriots coming from 25 points behind to win Super Bowl LI. Don't miss the thrills and the fanfare of the biggest game of the year.

"The Super Bowl's status as a major American sporting event is indisputable. Doeden has produced a solid winner with this historical account of the annual event. Beginning with the meeting of representatives from 11 professional football teams in 1920 in Canton, OH, he examines the disorganized circumstances surrounding the formation of the National Football League. Some decades later, Super Bowl I was born in 1967, drawing 62,000 fans. Doeden's overview of this major championship game is enlightening and includes information on halftime entertainment and off the field activities. Images consist of numerous, captivating photographs. The author doesn't shy away from controversial issues that affect the sport. He also discusses efforts to broaden football's international appeal - could there be a Super Bowl overseas one day?" (School Library Journal)

"Although the Super Bowl is at the hub of Doeden's story, he also follows the evolution of professional football from mud bath to cultural institution and beyond. It wasn't until the 1920s that the sport rose above the status of Midwestern semipastime. It was during that decade, Doeden explains, that the owners of the 11 professional teams created what was to become the National Football League. Of equal importance, writes Doeden, a championship game was established. It didn't matter that it was held on a field that was 20 yards short 'and hadn't been properly cleaned after a circus had been in town.' Still, 'it didn't take the league long to discover that playoff games made a lot of money.' Doeden easily negotiates all the brouhaha surrounding the upstart American Football League and the inevitable path to a clash between the two leagues. Sidebars complement the accounts of great contests, memorable plays, and halftime extravaganzas (tactfully dodging the wardrobe malfunction). Doeden doesn't mince words when it comes to chronic traumatic encephalopathy: 'A 2016 study showed that 40 percent of retired NFL players showed some sign of brain injury.' His big question is equally frank: 'How far can the rule changes go before the game itself stops resembling the game that fans love?' A memorable and thought-provoking work of sportswriting that transcends the excitement of championship games." (Kirkus Reviews, starred)

"From the beginning of the National Football League and the origins of the term Super Bowl to the transformation of the halftime show, this book provides a concise, informative history of the football's annual championship. Even better, though, are the lively descriptions of the noteworthy games and the most memorable moments in Super Bowl history, starting with the greatest upset (1969) and ending with the greatest comeback (2017). From the dependable Spectacular Sports series, which includes Doeden's The Final Four (2016) and The College Football Championship (2015), here's another solid addition to sports shelves." (Booklist)