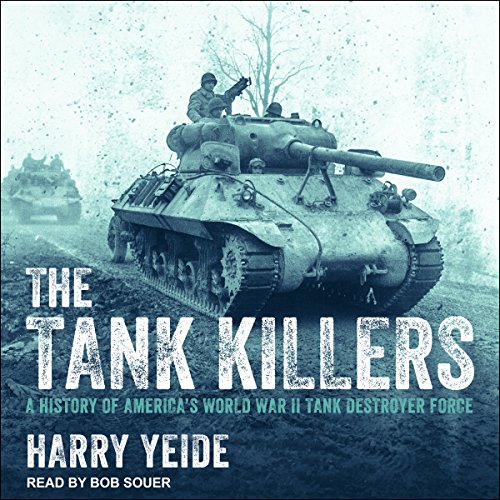 The Tank Killers is the story of the American Tank Destroyer Force in North Africa, Italy, and the European Theater during World War II. The tank destroyer (TD) was a bold - if some would say flawed - answer to the challenge posed by the seemingly unstoppable German blitzkrieg. The TD was conceived to be light and fast enough to outmaneuver panzer forces and go where tanks could not. At the same time, the TD would wield the firepower needed to kill any German tank on the battlefield. Indeed, American doctrine stipulated that TDs would fight tanks, while American tanks would concentrate on achieving and exploiting breakthroughs of enemy lines.

The Tank Killers follows the men who fought in the TDs from the formation of the force in 1941 through the victory over the Third Reich in 1945. It is a story of American flexibility and pragmatism in military affairs.

Tank destroyers were among the very first units to land in North Africa in 1942. Their first vehicles were ad hoc affairs: halftracks and weapons carriers with guns no better than those on tanks and thin armor affording the crews considerably less protection. Almost immediately, the crews realized that their doctrine was incomplete. They began adapting to circumstances, along with their partners in the infantry and armored divisions.

What listeners say about The Tank Killers

Dry and without detail

The best thing I can say about this book is that it's pretty factually correct. Unfortunately it's also a pretty dry compilation of facts that seems to do it's best to avoid drawing conclusions, diving into details, or providing anything really Tank Destroyer specific. Instead it reads more like basic history of the war with occasional assurances that tank destroyers were involved. I feel like this is on the cusp of being a great book but never got there. The narrator does his best, but I think even he starts dozing off a little at the end.

Great account of TD contributions to the war effort.

The conventional account of Tank Destroyers is that they were pointless and a waste of resources. If you want a definitive, well research account of TD action, from the North Africa campaign all the way through the Mediterranean through France to the West Wall and the surrender of the Axis forces in Berlin, choose this.

Now this doesn’t mean it pulls any punches. It definitely talks about the failure of the towed units to adapt once in the ETO.

Overall though, this is the best accounting of the TD controversy I’ve ever read or heard. Sure, it stumbled in the beginning but what about war is ever easy or efficient. This book showcases what was a solution to problem unique to WW2. Tank development towards the end of the war made them obsolete, so their contributions are often glossed over or dismissed because their textbook “doctrine” was unrealistic. The text shows however, that in the real world they were very effective on the ground, and the number of Panzers knocked out proves their worth.

If you are interested in TD’s you CANNOT miss this title.

My only gripe is the reader, while his voice is enjoyable, the chronic mispronunciation of European towns and cities was a bit annoying when you would hear it very often during a particular campaign.

I like all things tanks do this was enjoyable ft. or me. The book was very informative and followed smoothly in my opinion. There are not many books available about tank history so we take what we can get.

I went into reading this already having learned quite a bit about the tank destroyer force. There were a few things that I learned - primarily about the pre-war war games and such. On the whole the book does a great job of presenting the TD force and its battle performance. Something that its WAY overlooked in the sherman-panther-tiger obsessed debates about WW2 armor.

Going in just be aware that it is a bit dry, and while there is discussion about the tank destroyer theory and performance the bulk of the book is taken up with a chronological following of TD battalions from their formation until the end of the war (and a tad after).

I would've liked to have had a bit less 'X ' TD battalion fought with 'Y' friendly division against 'Z' Germans on 'this' day. A bit more analysis of overall performance would've been welcome.

Still well worth a listen. Especially If you want to learn about the unique American approach to tank destroyers.

I knew before starting that this book would discuss the weapons & tactics. The author has managed to relate this information as a boring, dry recitation of dates, unit numbers, etc. It’s mind numbing all the details without any interesting touches. There’s a rare personal story or event but way too little. I’ve read many books about armored warfare so I can tell you - this book was awful.

well written well-documented detailed account of the destroyer of Italians in World War II. I was not aware of their tremendous success rate

Very thourogh, very in depth. I didn't realize the TD battalions would end if being used the way they were. Pretty interesting stuff!

Exceptionally well read with a solid mixture of details but stll enough battlefields description to maintain interest all the way through the book.