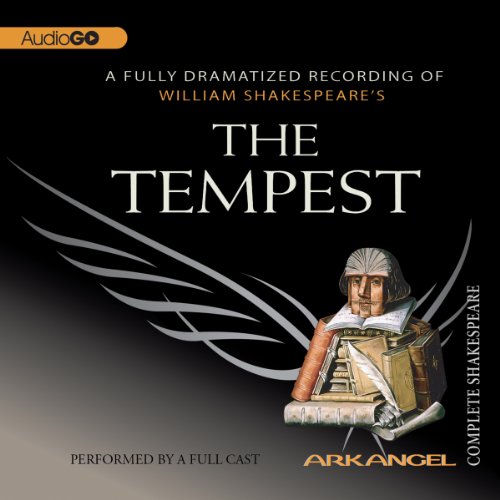 This haunting drama of vengeance and forgiveness crowns the group of tragicomic romances that Shakespeare composed at the end of his career. Sometimes read as his farewell to the stage, the play contains some of Shakespeare's most lyrical verse.

Prospero, wise Duke of Milan, has been deposed by Antonio, his wicked brother, and exiled with his daughter Miranda to a mysterious island. But Prospero possesses supernatural powers. Aided by the spirit Ariel, Prospero uses his magical art to bring his enemies under his control.

Some voices lack in tone and emotion, making it difficult to focus on the story.
overall, the audiobook is fairly good. 3 1/2 stars.

What made the experience of listening to The Tempest the most enjoyable?

The actors and the production always make ArkAngel top notch!

What other book might you compare The Tempest to and why?

Any ArkAngel production of Shakespeare... I particularly enjoy Macbeth, Hamlet, Othello, A Midsummer Night's Dream, Antony and Cleopatra, Taming of the Shrew, King Lear and Romeo and Juliet.

The casting of actors is completely appropriate for the characters.

The ArkAngel productions are a wonderful supplemental component when teaching with Shakespeare. Having students listen while they follow along with the play, brings the words to life for them and allows them to see and hear the play, creating a more dynamic learning experience.

Fantastic rendition of a gorgeous play. Arkangel’s unabridged renditions are always the best. The music and sound design are especially beautiful and really convey the island’s magic.

This audio version was excellent. The voice acting was amazing and audio effects were good but not too much. I need to see the play live. I think I would get more out of this seeing actors perform it. Hopefully a theater in the Twin Cities will perform it sometime in the near future.

We listened to this version for our AmblesideOnline Shakespeare reading of The Tempest. They kids loved the music and drama, and I appreciated the meaning that was brought out by the excellent reading by the cast.

Not as good as Folger Theatre

I enjoyed the story, but was a little disappointed with the ending. I think I would like it better if I saw it.