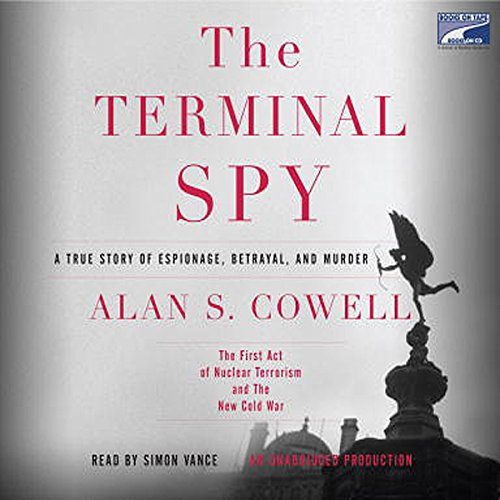 An award-winning journalist exposes the troubling truth behind the world's first act of nuclear terrorism.

On November 1, 2006, Alexander Litvinenko sipped tea in London's Millennium Hotel. Hours later, the Russian former intelligence officer, who was sharply critical of Russian president Vladimir Putin, fell ill, and within days was rushed to the hospital. Fatally poisoned by a rare radioactive isotope slipped into his drink, Litvinenko issued a dramatic deathbed statement accusing Putin himself of engineering his murder.

Alan S. Cowell, then London Bureau Chief of the New York Times, who covered the story from its inception, has written the definitive story of this assassination and of the profound international implications of this first act of nuclear terrorism.

Who was Alexander Litvinenko? What had happened in Russia since the end of the cold war to make his life there untenable and in severe jeopardy, even in England, the country that had granted him asylum? And how did he really die?

The life of Alexander Litvinenko provides a riveting narrative in its own right, culminating in an event that rang alarm bells among Western governments at the ease with which radioactive materials were deployed in a major Western capital to commit a unique crime.

But it also evokes a wide range of other issues: Russia's lurch to authoritarianism, the return of the KGB to the Kremlin, the perils of a new cold war driven by Russia's oil riches, and Vladimir Putin's thirst for power.

"[A] wholly engrossing and thought-provoking story of espionage and homicide." ( Los Angeles Times)

Slow but gets there in the end.

The initial part of the book is detailed and slow going but the story picks up when it gets to the hunt for the Polonium around London and into Europe. While it covers Russian politics and intrigue in great depth we are never really sure, even at the end, who, if anyone, authorized the poisoning but with such a full exposition of the background and facts the listener is well equipped to come to their own conclusion and realize why we may never know the full details of the story.

The chapters regarding Polonium should be required reading for anyone involved in public safety.

A 5 star behind the scenes investigation on Russian politics. A well researched well narrated expose on Putin era assassination. How the billionaire oligarchs bought up England's prime real estate and put down roots while criticizing Putin's thug-like diplomacy.

But one former KGB star spy just talked too much and was poisoned with a potent radioactive agent triggering an international murder investigation.

I did enjoy the story, but the narrative seemed to all over the place. The instance of Litvinenko's death is foreshadowed more than a dozen times. This made the book seem really repetitive. Also the narrator's instance of calling Polonium 210 "two, one , oh" really got annoying. I have never heard it called that.

If you could sum up The Terminal Spy in three words, what would they be?

I enjoyed the book very much. I like listening to Vance, he always does a great job.

Have you listened to any of Simon Vance’s other performances before? How does this one compare?

I have listened to many of his performances. This is an excellent one.

The only reason I even finished listening was because I paid $25 for it. If you decide to give it a try skip staight to chapter 11. Before that it's a boring, pointless history that only marginally has to do with the story.

What would have made The Terminal Spy better?

Too much explaining and it is like a history - which it probably is. No real spy stuff here, unless it is undercover :-).

Has The Terminal Spy turned you off from other books in this genre?

Who would you have cast as narrator instead of Simon Vance?

Author is not so good

I enjoyed the topic but felt it went on a bit too much for me. This is a well researched audiobook/book with lots of detail. If you are looking for a deep and in depth analysis of the topic then look no further. If you have a passing interest then perhaps look elsewhere.

This is an excellent audio book on the life and death of Litvinenko. I could not put it down. I highly recommend it.