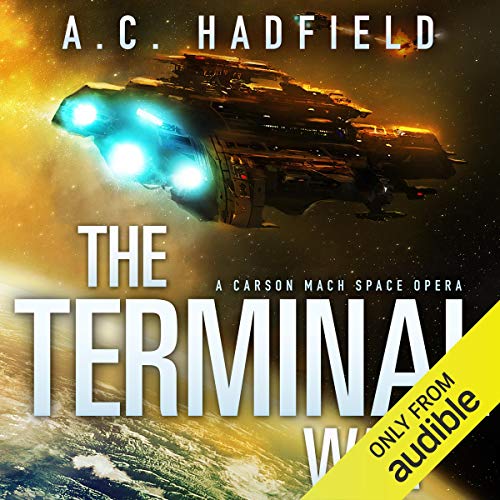 A millennium into the future. In a galaxy far from Earth. We were not prepared for the Terminal War. Billions of lives are at risk as enemy forces mass on the frontier of the Commonwealth. If the planet Terminus, the center of all the Commonwealth's technology, falls, we will lose everything, and there will be no way back.

The Axis Combine's fleet is overwhelming in number, and their firepower is superior. Unless one man and his crew can save Terminus, the galaxy will never be the same again. They must find a way to give the Commonwealth an edge, or we'll face complete annihilation. There is but one hope: Carson Mach and his motley crew of rogues on the starship Intrepid.

"I really enjoyed this new Carson Mach adventure. The Terminal War combines the best of Star Wars and Battlestar. I can't wait for the next one!" (Joseph Chipperfield)
"Great intrigue on the planet, and space battles on a grand scale! A. C. Hadfield has managed to suck me in again with this wild ride." (T. J. Romero)

What listeners say about The Terminal War

One assignment, to many.

Mac and his crew help the president and the star system, attempt to conquer the incoming, out numbering forces. The team splits up and find a lot of clues. And a mole.
So many twists and turns, in this volume, it will keep the reader wondering what is next.
Alexander Cendese does a lot of different voices. I tip my hat to the author and the narrator !!!

The details are amazing

It was wonderful but honestly I would have ended it after the battle and just have had Mac be told of the traitors capture.

this is for 15 year olds