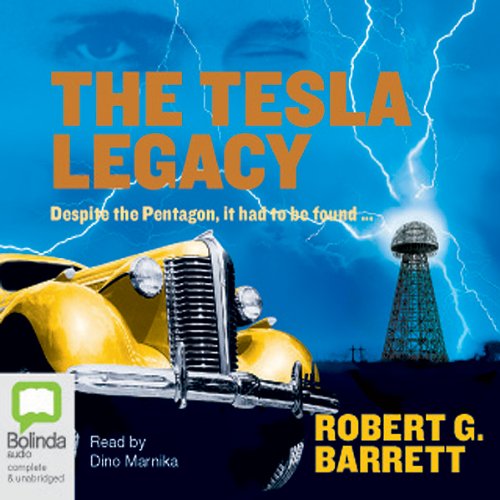 From the best-selling author of the Les Norton series. The Tesla Legacy, set in Newcastle, Muswellbrook, Scone, and the mysterious Burning Mountain in New South Wales, is an action-packed, pace-driven thriller woven with intrigue and a delightful touch of humour and romance, and an ending guaranteed to send chills down your spine.

Nikola Tesla was a scientist that some argue was a greater genius than Einstein. He died in the United States in 1943, but what was he doing in Australia in 1925? A Newcastle electrician and his girlfriend try to find out, but it seems more than one person wants to stop them, including the CIA.

The Tesla Legacy proves, once again, why Robert G. Barrett is, according to The Australian newspaper, the king of popular fiction.

"Do not read this book in public unless you are comfortable laughing in front of strangers." ( Sidney Morning Herald)
"A cracker of a read...a good touch of the smarts and lashings of heartfelt humour." ( West Australian)

What listeners say about The Tesla Legacy

this is an interesting story that had a few twist. not what i was looking for but i did listen to the entire program. i did enjoy the Australian accent.

Love this author and narrator. Just a romping good story. It is very funny in an unique Australian way. I am not sure that non Australians will understand the book

This book was ridiculously disappointing.

This was the biggest disappointment yet to be found on audible....I was really hoping for a book about tesla, not some two bit made up version of how his life "might have played out from teen years". ugh. This made me want to delete audible.com

Would you try another book from Robert G. Barrett and/or Dino Marnika?

To distorted and a Aussie narrator made it difficult to listen to. Audio poor. Not what I even expected.

Depends more marketing social media books but I will listen to the sample very carefully.

Who would you have cast as narrator instead of Dino Marnika?

I went by the title. Can't judge by the cover alone

I enjoyed the Australian accent,at least for one hour-the book is terrible.I gave after an hour.

The story had a great beginning and a great idea but it was spoiled by very cliche characters and unrealistic plot.
The characters are very cliche, and I wasn’t sure whether it was Kath and Kym or the castle, either weigh it back to originality. It just didn’t make sense, the drama was false, there would be no way in the US and SA members would terminate to Australian kids on a foreign sure just because of one search on the Internet. And the US Marines or whatever they were completely cliche and laughable. Otherwise it was a really good idea and had a really good plot regarding Nicola Tesla, but it was destroyed and really hard to listen to because of the way that the characters interacted. I don’t like saying this sort of stuff because it was a good idea but I just think the plot and have a whole stack of development, it sounded like it was written by someone that smokes a lot of dope up in Northern New South Wales with all sorts of conspiracy theories going through their heads.

It's a shame Bob isn't around anymore to write classic Aussie tales of characters you can't help but love... not Les Norton but still written in the same style readers of Bob have come to love!!!

For a Bob Barrett book, it is fairly sedate , a really interesting story, but sedate...... I loved every minute of it because sedate or not, it's one of Bob's books and Bob always wrote a bloody good book.
As far as authors go, I reckon Robert G Barrett is the grouse.
And as far as narrators go, I always enjoy listening to Dino Marnika. I reckon he nails the characters really well.