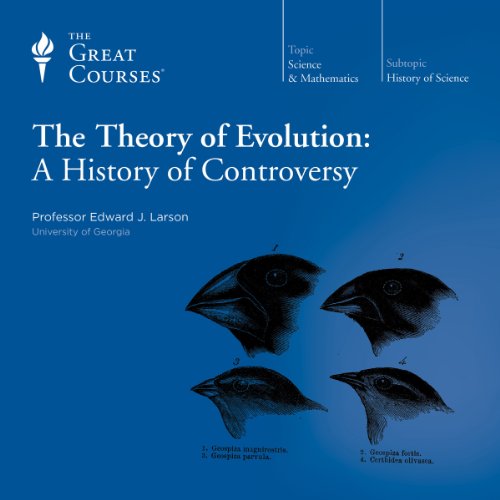 Charles Darwin's theory of organic evolution - the idea that life on earth is the product of purely natural causes, not the hand of God - set off shock waves that continue to reverberate through Western society, and especially the United States. What makes evolution such a profoundly provocative concept, so convincing to most scientists, yet so socially and politically divisive? These 12 eye-opening lectures are an examination of the varied elements that so often make this science the object of strong sentiments and heated debate.

Professor Larson leads you through the "evolution" of evolution, with an eye toward enhancing your understanding of the development of the theory itself and the roots of the controversies that surround it. Here, you'll explore pre-Darwinian theories of the origins of life, from Genesis and the ancient Greeks to such 18th- and 19th-century scientists as Georges Cuvier. You'll follow the life and work of Charles Darwin, and the impact of his 1859 masterpiece, On the Origin of Species (the first printing of Origin of Species sold out on the first day).

You'll examine the history of evolutionary science after Darwin-including the "rediscovery" of Gregor Mendel's work on genetic variation and the discovery of Piltdown Man, a fake evolutionary "missing link," in 1912. And you'll trace the history of religious objections to evolution, from those of Darwin's own time to contemporary efforts to teach creation science in American schools. Richly detailed yet accessible to any curious mind, these lectures offer an invaluable perspective on the volatile history of what is arguably the single most significant idea of modern times.

What listeners say about The Theory of Evolution: A History of Controversy

Little mistakes here and there

Great overall, but makes a few mistakes here and there. Two instances:

2. Herbert Spencer was not really a social Darwinist or a conservative. Nor was he an imperialist. In fact, Spencer was an anti-imperialist and for things like the equality between the sexes. (That's right! Spencer was an early feminist.;) Much of our views of Spencer today come from not actually reading his works, but those of his critics -- critics who've read him selectively and apply a double standard to his writings.

Anyhow, these mistakes detract from some of Larson's story, but they're not fatal and there's much to learn, especially regarding the milieu Darwinian theory evolved from and the meandering path it's taken over its now near 160 year history.

Great listen, I was expecting a account of Darwin and the steps we took before arrival at evolution and it presented all those and more wonderfully

I enjoyed this immensely. But more than once, while referring to Mendel's pea plants. He said "pee pants". Being the way that I am, I found this very funny. This ended up distracting me so much so, I had to cycle back more than once to listen and take in what he was saying.

The history of the theory of evolution

Not bad. Not particularly exciting, either, but a decent overview. Note that this is less of a biology textbook explaining evolution and more of a history textbook talking about the theory of evolution. What came before it, about Darwin's creation of it, competing theories at the time, and the ebb and flow of waves of opposition over the time since then.

I quite enjoyed listening to this lecture. It helped me construct a big picture of the evolution of evolutionary idea (the sentence writes itself!). Prof Larson gives a concise account of the controversy and to some extent, investigates its roots, without ever assuming a judgemental tone which I appreciated very much. I study evolution for a living and it just boggles my mind that there are a number of people in the world who would dispute evolution. However the name calling that passes for discussion on the web on this or any other topic, gets on my nerves. I found it very useful to understand the roots of this controversy from a non-passionate viewpoint.

I did not realise until after listening to the course that I have also read a book by Prof Larson on the same theme. I can recommend the book as a complement to this course for interested readers.

I would love it TGC could arrange for someone to extend this theme to a worldwide context, that is if evolution is controversial outside of the US.

both performance and story are hard to evaluate for series of courses. However it was fascinating and understandable for any person, so don't be afraid that it's out of your level if you are interested in this topic

What is the controversy?

From the publication of "On the Origin of Species" to Kitzmiller vs Dover, the history of the Evolution "Controversy" has a longer history than most people realize. In this book you will learn the ever changing public opinion of the Theory of Evolution.

These lectures were a ton of fun. I definitely learned a lot and look forward to listening to more from Edward Larson.

A great and informative lecture!

I appreciated and enjoyed the way Larson delivers his information in a historical context. I found it to be well structured, which made it easy to understand and helped me see how things evolved and connected to today’s context. A great listen for a great lecture!

Discover the History of the Idea

What I loved about this was its different perspective on teaching how Evolution as an idea grew in the societal psyche. Previously, I have been taught Evolution in various Biology, Ecology & Animal Behavior classes through a biography of Charles Darwin's life. While Darwin was of course crucial to communicating Evolution's mechanism and providing able evidence for the theory, there is so much more to the story of the Evolution's biography!

Prof Edward J. Larson is really great as describing pre-Darwin scientific developments and cracks at accurately describing Evolution, such as with Lamarck's giraffes and Gregory Mandel's peas. In addition, learning more about societal and religious reactions to Darwin's Evolution, and over a larger time period than one is usually introduced to in one unit of a college course, was so interesting.

I wish I could sign up for a newsletter to get notified of whenever Larson comes out with another audiobook, narration, or Great Courses piece. I would recommend this to anyone who has been taught Evolution in school (which should be everyone), and especially those who are into popular science books about evolution, biology, animals, etc.

Where does The Theory of Evolution: A History of Controversy rank among all the audiobooks you’ve listened to so far?

One of the best audiobooks I have listened to so far.

This is a superb introduction to the subject.

The discussion on genetics was particularly good.

Good overview of how evolution theory came to slowly dominate the scientific thought & the different conflicts with christian thought. I thought he was even handed, tracing some of the problems with the theory in the fossil record & concluding with short quotes from R Dawkins on one hand & P Johnson (ID proponent) on the other and suggesting there is more to come in this debate.

These lectures are about history rather than deep dive into the concept. Very simply presented and thus can be heard in the background without any thinking skills involved.

Amazing book, simple and very well written
The theory of intelligent Design was not given much mention or credit