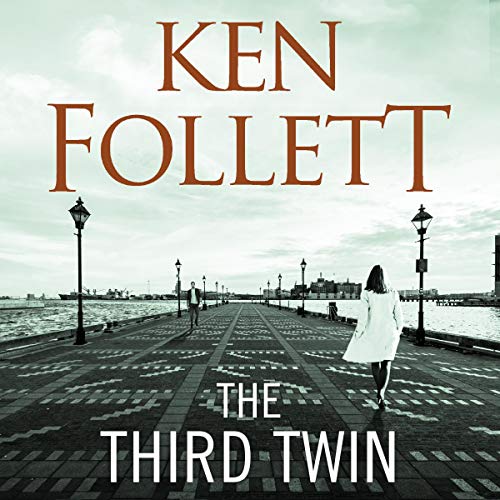 He could be your lover, your friend...or your killer.

Scientist Jeannie Ferrami stumbles across a baffling mystery: Steve and Dan appear to be identical twins but were born on different days, to different mothers. One is a law student, the other a convicted murderer. They seem a world apart, but as Jeannie begins to fall in love with Steve, she finds her professional - and personal - future threatened.

But when Steve is accused of a terrible crime, Jeannie is forced to question just how unalike the two men really are. Together, she and Steve investigate and start to uncover buried secrets. But perhaps some secrets are best left alone....

A thrilling, chilling story of hidden evil, The Third Twin is a heart-stopping, spine-tingling story from master of suspense Ken Follett.

What listeners say about The Third Twin

DO NOT BUY THIS BOOK INCOMPLETE RECORDING

Fantastic story but the audio recording is missing about a third of it. Have tried to raise with Audible but they are pretty hopeless

I suspect that the audiobook is defective, as in it the story seems to end well before it does in the book.

It looks as if the audiobook is short a good few chapters, which is unfortunate, because the story in the book comes to a satisfactory conclusion.

A really abrupt ending to the book. It feels unfinished and made me think I'd wasted my time and money reading this. it was all going along quite grippingly too.

liked the plot of this book although a bit far fetched.. the narrator was excellent easy to listen to totally disapointed in the ending though far too many loose ends ...the author could easily have written another couple of chapters

This is obviously an incomplete recording. It needs to be fixed. Do not download it until the problem is resolved. Some readers were obviously wondering why the book finished in the middle of nowhere. I am sure it does not.

I couldn’t wait for my next journey in the car to listen to this book, and when I got home I found myself sitting in the car, to finish the chapter.

I have yet to tire of Ken Follett.He keeps me guessing all the way,right up to the end.

Well written, supported by factual detail sufficient to convince me, at a pace that never falters. The narration is well delivered, too. I really enjoyed it.

I do not wish to spoil the ending for anyone who has yet to hear it, so let’s just say that a sequel beckons .

Great subject and so well written by Ken Follet - like all his other books. Thank you.

A somewhat predictable storyline but still an enjoyable listen. A good performance by the narrator.

Unlike the story in the printed version, this recorded version is incomplete. This is extremely disappointing!!!!