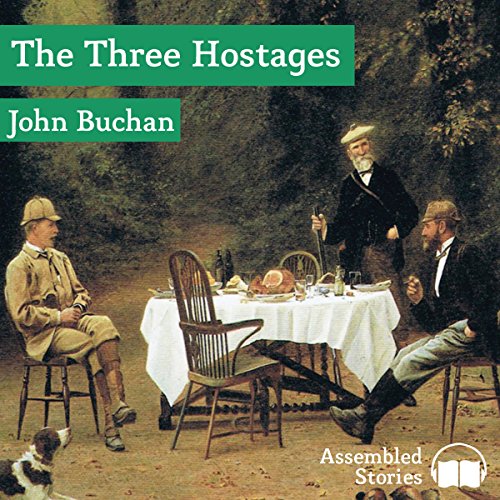 Hannay to the rescue once more! This time...our hero is summoned from his tranquil life in rural Oxfordshire to save the world from a financial conspiracy which threatens the global economy. Hannay comes to believe that the villain behind all this must be Dominick Medina.

But can such a brilliant, charming idol of the nation be using Eastern magic to suborn industrialists, magnates and other such pillars of society as his slaves? Is Medina also capable of holding hostages as insurance against the failure of his dastardly schemes and to guarantee his escape from justice?

Infiltrating the organisation, Hannay befriends Medina and starts to investigate. His mission takes him from England to Norway and culminates in Scotland, where the protagonists stalk each other in a most thrilling chase and the outcome is death - but who will be the victor?

What listeners say about The Three Hostages

Have you listened to any of Peter Joyce’s other performances? How does this one compare?

Peter Joyce plays it marvellously, his character is realistic and he hits the right tones for coin of phrase. I happily listened for hours at a time

If I had time yes

Loved it, not as thrilling as the others, but a good tale.

Some good some bad

An entertaining yarn spoilt by anti-Semitic comments. I would prefer these blanked or bleeped out. Narrator did an excellent performance.

The fourth Hannay book and IMO better than the preceding three tales. A more complete story which slowly builds, but never interestingly, into a thrilling climax. Richard Hannay is a great character in English literature but I've yet to see him properly translated to film or TV. Maybe not a bad thing though. Imagination always triumphs visualisation. Peter Joyce does a fine job as presenter/reader. The characters are of the time in which they perform so the social views sound distinctly old fashioned and rather racist but the storytelling is excellent. Thoroughly enjoyable. Thoroughly recommended