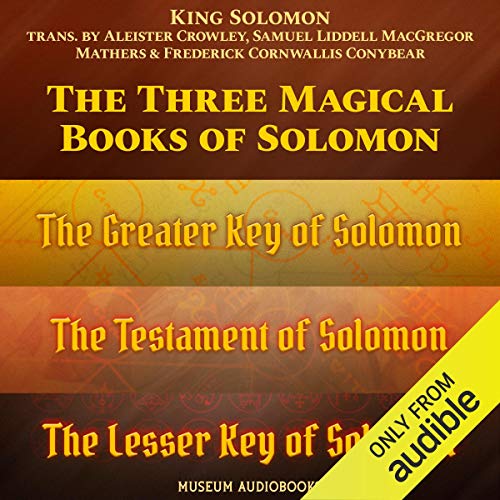 The Greater Key of Solomon is a compilation of Solomonic magic drawn from various manuscripts of the 15th to 17th centuries. It contains information on the operation of conjurations, curses, and spells for summoning supernatural entities, or obtaining powers an abilities by the use of talismans and pentacles. There are instructions on the proper clothing during occult practice, and purification rituals. Other passages focus on attaining invisibility and restoring lost property. Warnings about using these enchantments occur throughout the text.

The Lesser Key of Solomon includes step- by-step guides for invocation, evocations in the Enochian language as well as definitions and explanations for the ancient terms used in the work.

The Testament of Solomon is a pseudoepigraphical work in a first-person narrative, which tells the story of the creation of the magical ring of King Solomon that he used to bind and control various demons. It relates the discourses between the king and the various spirits the story shows how Solomon used his wisdom to resist the guile of the demons and get them to help build the temple.

not keen on black magic

I really regeret this purchase anda would like to remove it. please help me. hello?

I enjoy opening my eyes, and ears to so much hidden knowledge. Who knew that there's so much to learn by educating myself to the untapped teachings.

performance is good, material is less than

the intro talks about everything that was left out of the book. I'm glad it does, because there is so much not included. I wanted these books to learn as much as I could, and I'm disappointed that so much was not included because the author some didn't feel like it

reader is excellent, but it is not in order. over all I like it as

Not my cup of tea

Just not to my own liking….couldn’t get into it didn’t like the reading stories