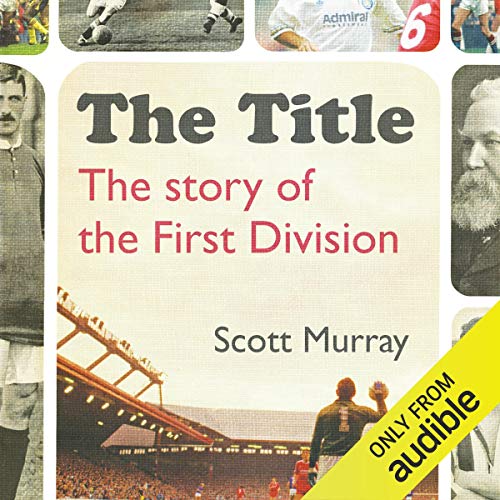 Today the top flight of English football is inescapable: a multi-billion-pound, star studded beast shrieking from our screens and newspapers seven days a week and presented as the be-all and end-all of the game's history. Yet, prior to the Premier League's inception in 1992, there's a rich tapestry winding back to 1888 and the formation of the Football League.

In The Title, Scott Murray delivers a lively, cherry-picked history of the country's football narrative through the prism of the old First Division. Rich with humour yet underpinned with solid research, this is a glorious ramble across English football's varied terrain.

With as much about Preston, Burnley, Wolves, Portsmouth and West Brom as the likes of Arsenal, Liverpool and Manchester United, we learn the less well-known stories the sport has to tell, such as the plight of Glossop - the smallest club to ever play top-flight football. Every period is covered from the early managerial genius of Tom Watson, the bowler-hatted Victorian Mourinho, to Kenny Dalglish and Alex Ferguson, via Herbert Chapman, Matt Busby, Bill Shankly and Brian Clough.

All presented in Murray's usual sardonic style, The Title is a highly informed, fresh and affectionate one-stop guide to the history of the English game, and a delight for any football fan.

What listeners say about The Title

As a Pe Teacher and lover of football, I had real hopes of extending my own football knowledge with this book, and if you can sit through the drab performance and ridiculous amounts of mispronunciations, you might enjoy it.

Juve is pronounced as you’ve.

I can’t bare to relive the rest.

I’d expect Audible to at least employ a producer that had some understanding of football and considering the Narrator has done at least one more football book, it’s frankly embarrassing

Judging from his inability to correctly pronounce so many ground names, footballers’ names etc, the narrator has clearly got very little knowledge of football. Fatally undermines the credibility of the book.

Well-paced and containing more than just the usual well-worn stories and received wisdom, this is an excellent history of the old First Division, very timely in these current Premier League obsessed days.

Nicely narrated overall. However, one big bug bear is the errors that were allowed to remain in his pronunciation of certain players’ and clubs’ names. Dave Mackie? Steve Hayway? Bow Russia M’gldbach, Gary Francis? Bill Shankly and Tommy Doc with Yorkshire accents? Doesn’t anyone help the narrators with this stuff?

Still a good listen though. Recommended.

A thoroughly enjoyable read. I thought I knew pretty much every great manager and team in the history of English football but there's so much here that I was unaware of. I hadn't previously read anything by the author but will look out for any future titles as it was the writing as well as the information that made me enjoy this so much

A great book slightly spoiled by the constant incorrect pronunciation. Would recommend the book but not the audio book with this useless performance!

Nostalgia at its best, but....

Took me back to when you could actually relate to the players in your team or the oppositions. Well researched and full of new facts that I was unaware of, BUT Piers Hampton, turns out he is one when it comes to pronouncing names of footballers and teams, in fact it's hilarious! Honestly, how hard is it to get the names of famous footballers and teams correct? Whoever oversees this, presumably a producer needs to do their homework...shame as the content is very good, just let down by Mr Hampton...obviously not into his football.