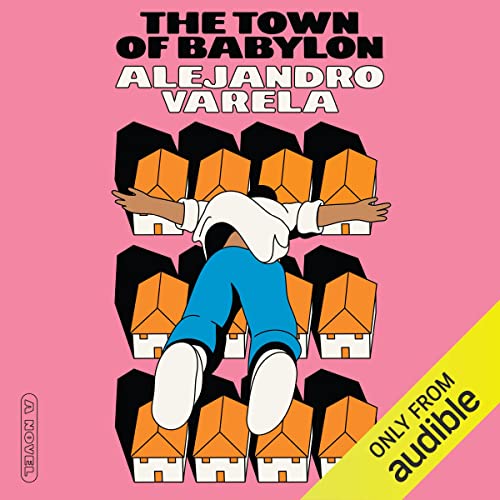 The Town of Babylon

One of the Most Anticipated Books of 2022 - BuzzFeed, Lit Hub, Electric Literature, LGBTQ Reads, Latinx in Publishing

"A gay Latinx man reckons with his past when he returns home for his 20th high school class reunion in Varela’s dazzling debut...an incandescent bildungsroman" (Publisher's Weekly, starred review)

"Varela’s debut novel shimmers with tension, navigating the personal and political with practiced ease. Treading the waters of adolescence and adulthood, The Town of Babylon navigates the complexities of home, queerness, and messy histories with measure and empathy. Weaving together histories of immigration, economic unease, and the health complications of racism in America, Varela troubles ideas of community and shared experience amidst a polarizing landscape." (Kaitlynn Cassady, Seminary Co-op Bookstores)

"[An] intense, astute meditation on race, family, class, love, and friendship. Varela's wry humor is the icing on the cake of this brilliant novel." (Deesha Philyaw, author of The Secret Lives of Church Ladies, finalist for the 2020 National Book Award for Fiction)

"An incisive taxonomy of the American suburb, looking beyond the white picket fence to tell a different story - what it is to be queer, the child of immigrants, and a person of color in this country." (Rumaan Alam, author of Leave the World Behind, finalist for the 2020 National Book Award for Fiction)

A debut novel about domestic malaise and suburban decline, following Andrés, a gay Latinx professor, returning to his hometown for a 20-year high school reunion.

When his father falls ill, Andrés, a professor of public health, returns to his suburban hometown to tend to his father's recovery. Reevaluating his rocky marriage in the wake of his husband’s infidelity and with little else to do, he decides to attend his 20-year high school reunion, where he runs into the long-lost characters of his youth.

Jeremy, his first love, is now married with two children after having been incarcerated and recovering from addiction. Paul, who Andrés has long suspected of having killed a man in a homophobic attack, is now an Evangelical minister and father of five. And Simone, Andrés's best friend, is in a psychiatric institution following a diagnosis of schizophrenia. During this short stay, Andrés confronts these relationships, the death of his brother, and the many sacrifices his parents made to offer him a better life.

A novel about the essential nature of community in maintaining one’s own health, The Town of Babylon is an intimate portrait of queer, racial, and class identity, a call to reevaluate the ties of societal bonds and the systems in which they are forged.

What listeners say about The Town of Babylon

I will think about The Town of Babylon for a long time.

This book is about the coming of age of a younger, gay, progressive Hispanic man as he returns to his traumatic home town, his family, his school mates and his first love after years of absence.
Personally, The book gives me thoughts of reflection. Unlike Andrés, I am white and at least 50 years older, but like him, I am gay, a professor (retired) and a progressive liberal. I relate to his social and political views and to how those views were and are and were and are not received by others during my life.
This book gave me opportunity to see myself in him both in both positive and less positive lights as he relates to others. Frankly, I glimpse in Andrés why conservatives might dislike liberals with our repulsion and instant judgment of conservative people, their views and actions. There were times in the book that I didn’t like Andrés, his inflexibility, his self righteousness judgment toward others even as I saw myself in him.
During the course of the book, Alex matures and mellows a bit. He becomes more human, more likable. Additionally, the book has opened my understanding of hispano Americans experience in our predominantly white culture.
I just finished this book but I will think about ‘The Town of Babylon’ for a long time and maybe I will be more understanding of both others and myself.

I loved this book filled with inner dialogue. For fans of The Heart’s Invisible Furies. I thought the audio performance was spectacular.