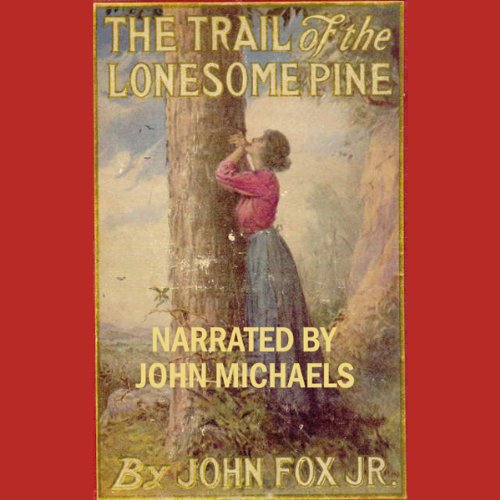 The Trail of the Lonesome Pine

This novel by John Fox, Jr., narrated by John Michaels, captures the essence of pre coal-mining life in the Eastern Kentucky mountains, isolated since the Revolutionary War, as the residents move into the 20th century. Fox weaves the love story of Hale, an outsider, and June Tolliver, a mountain girl, against the background of coal companies ravaging the mountains and a 30-year fued between the Tollivers and the Falins.

In language lyrical and poetic, Fox describes the beauty of the mountains and the promise of love delayed. An Appalachian Pygmalian.

"A classic of Appalachian literature. Through this romance runs the social and political drama of eastern Kentucky's mountain people.... Fox can help us, even now, to consider what Appalachia finally means to its people." ( Appalachian Journal)

What listeners say about The Trail of the Lonesome Pine

What disappointed you about The Trail of the Lonesome Pine?

The producer had the narrator say end of chapter at the end of each chapter. This kills the moment. I would rather have a pause so I can savor the final sentence of the chapter. Then announce the next chapter.

The story itself is very enjoyable especially if you enjoy historical fiction.

This Book is a Classic that was turned into the 6th longest running outdoor drama, still running in Big Stone Gap, Virginia. It tells of the rise and fall of a potential coal mining town in the Blue Ridge and the rise and fall of a man who invested in the town.
It also traces the reversing roles of the out of town stranger and a mountain girl he falls in love with. As he helps her become educated and learn to live in the style of the outside world, he gradually looses his polish and falls into the life and habits of the mountain folk.
There is excitement and danger as the outside world comes to try to "tame" the feuding clans of the mountains. The tension of the changes in the mountain girl and the outsider strains their relationship in unexpected ways.

The narrator of the book sounds stilted, as if he read the book in the early days of it's publication, in the early 1900's. The recording sounds as old, with the sound skipping or coming and going now and then. It would be lovely to have an up-to-date recording to breath life into this true classic.

didn't finish it - found the narration a little tough to listen to in spots, just didn't draw me in

At first I thought this was narrated by some type of voice generation computer, but then I realized that was impossible because even a computer with random voice inflection could achieve a much higher rate of appropriate word emphasis than this narration. It seems the narrator is intentionally emphasizing the wrong word or phrase in a sentence to either make the sentence uninteligible or to run it on to the next sentence such that both are uninteligible. Nine hours of this would be much more effective to extract information or drive the victim insane than currently accepted torture methods.