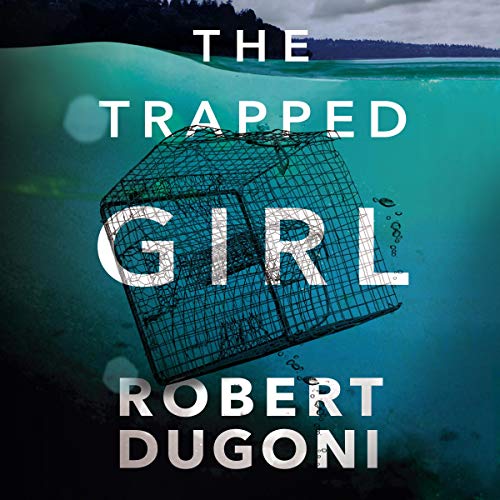 In this #1 Wall Street Journal bestseller, Tracy Crosswhite must first identify the victim to catch the killer.

When a woman’s body is discovered submerged in a crab pot in the chilly waters of Puget Sound, Detective Tracy Crosswhite finds herself with a tough case to untangle. Before they can identify the killer, Tracy and her colleagues on the Seattle PD’s Violent Crimes Section must figure out who the victim is. Her autopsy, however, reveals she may have gone to great lengths to conceal her identity. So who was she running from?

After evidence surfaces that their Jane Doe may be a woman who suspiciously disappeared months earlier, Tracy is once again haunted by the memory of her sister’s unsolved murder. Dredging up details from the woman’s past leads to conflicting clues that only seem to muddy the investigation. As Tracy begins to uncover a twisted tale of brutal betrayal and desperate greed, she’ll find herself risking everything to confront a killer who won’t go down without a deadly fight. Once again, New York Times bestselling author Robert Dugoni delivers a taut, riveting thriller in the fourth installment of his acclaimed Tracy Crosswhite series.

What listeners say about The Trapped Girl

Robert Dugoni has become a favorite...

...author of novels of the modern detective genre. The Trapped Girl, audio version released today, is the 4th novel in his Tracy Crosswhite series. It is yet another solid 5 star thriller. Like others in the series this novel is set in Seattle where Crosswhite is a detective. This is a complex novel with action, suspense, and twists and turns. Dugoni is a master of the genre. Emily Sutton-Smith does a great job of narration.

What strikes me about this and all of Dugoni's work is the depth of character he breathes into each of novels. The Crosswhite series is filled with great police work and the realities of office politics.

The Trapped Girl delves into the world of an abusive marriage, a runaway wife and murder. Dugoni is brilliant in delivering a great cast, a heck of a great mystery and top notch detective work.

Emily Sutton-Smith is excellent, one of the best narrators I have encountered.

The Trapped Girl is worth your time!

In virtually every "whodunnit" there is a point where the reader discovers who committed the crime or crimes to be solved by the principle characters in the novel. Not so with "The Trapped Girl"! This is a crime novel that keeps the reader guessing from page one until almost the very end of the stories. Yes, the stories, plural.

Tracy Crosswhite and her partner are called upon to investigate the discovery by a high school student of a woman inside a crab pot he dredged from the bottom of Puget Sound while trying to recover his own crab pot. As he is pulling the snagged pot to the surface he notices a human hand protruding from the inside of the pot. He drags the pot back into shallow water and calls 9-1-1. Enter Tracy and Kins.

The body has no identification other than plastic surgery implants with the name of the manufacturer and serial numbers. Using that little bit of information, Tracy's team of detectives set out to give the corpse an identity. The serial numbers led the detectives to a plastic surgeon in Renton, Washington who puts a name to the victim but, contrary to normal procedure, who does not have any before and after images of the patient having honored her request she be given all of the images taken of her. The patient uses an alias and pays for the doctor's services in cash.

Enter Andrea Strickland. Interwoven throughout most of the book is a first-person narrative by Ms. Strickland of her background and life. It is a marvelous ploy on Dugoni's part and an element of a crime novel I have never encountered before in all my years of listening to this type of work. He leads the reader in so many directions it is virtually impossible to see exactly where he is going with the story line.

Who is Andrea Strickland and what is her role in this novel? You'll just have to read it for yourself to find out!

There is a temptation to give away too much in a review. Suffice it to say anyone reading this novel is not likely to be disappointed and, as one reviewer wrote, it just might need to be read twice to see all the nuances that make this one great read!

Every book in the series is fantastic and I cannot wait for the next installment.

Emily Sutton-Smith is one of my favourite narrators and she was outstanding with the delivery of the story.

The story was good and kept my interest

She spoke in a monotone, voice almost dragging over certain words. It kept taking me out of the story. Also, there were snatches of very well-known songs (Happy Birthday, for one) that should have been sung, but this narrator read them in that infuriating monotone. I would love to listen to the other books in the series, but can't tolerate the narration!

May have been better if I didn't have to listen to the reader make Dell sound like a dull wit. Also Fauz's voice wasn't done very well I'd rather hear her talking in her regular voice. Sorry

If you’ve listened to books by Robert Dugoni before, how does this one compare?

Best in series so far

I have enjoyed all of the Tracy Crosswhite books, but this is the best one yet. The story kept me guessing until the end and the characters continue to develop. Very engaging and enjoyable read!

This series began with a great story of suspend and red motion. But it has gone down hill to almost rock bottom with this novel. While the initial storyline is interesting, do we need to know what everyone is wearing, what they order to eat, and when each of them is served. And the throwing in that Tracy will become a Mom, give me a break! Pathetic.

Good story, well-thought out mystery, but I personally don't do well with shifting first-person books that reveal the story from two perspectives and two time-periods so grudgingly. Makes it difficult for me to relate to the main character. Guess my thinking is too linear. I like solving the case in real-time along with the detective.

This series has the best plots. Maybe it's the narrator but I find the dialogue rather boring. Also these cops don't ring true. Dugoni really over does the references to Sarah.She's mentioned at least 30 times in this latest offering. Sorry about that, I just had to vent. Like the rest of the series this is a better than average mystery with a so so narration

Plot was moved forward by one implausible behavior or action from almost every character after another.
And if I have to read one more police procedural where the lead character being a 'brilliant' misunderstood detective is 'removed from the case' just as they are about to have a breakthrough, I may just run into the hills crying!! That formula is lame!!
Poor narrator had to make the best of very bad material.

Another brilliant mystery featuring Tracy Crosswhite with enough twists to keep the reader guessing but not too many to make it difficult to follow.

loved this kept me on my toes with all the twists

amazing, love the story, full of twists and turns and my favourite of the series so far!

Wow. This was a complicated but ingenious storyline. It wasn’t u til near the end I had my suspicions lol. It was an awesome story and full of twists and turns. You just never knew what was coming next. Wonderful narration too

Best yet in the series

I am loving every minute of this series . I find myself trying to guess the ending with a "who did it" and I am yet to get it right. Going onto the next book in the series now and I can't wait .

Kept me guessing all through. A subtle plot with plenty of twists and turns.

I just love these Robert Dugoni books. I am working my way through all of them. Love the twists and turns.

Enjoyable, easy listening, well balanced storyline, twists and turns and hardly any swearing. Narrator was good also.
5 🌟 from me.

the trapped Girl by Robert Dugoni

This I thought was a very gripping book I had difficulty putting it down I would recommend it to any Detective book fan brilliant deduction on Tracey's part.

The book kept my interest throughout...it was well-written and the cause of my not pruning my bushes. The characters are believable and I did want to shake Andrea...but then I am a feminist.

This book is a very compelling read. The narrator

was excellent, her voice was very soothing. I had problems putting it down every night.

Could not stop listening to this book, absolutely gripping. Well read with really believable characters.

Another great mystery with suspense and intregue. A great installment to the Tracy Crosswhite series.