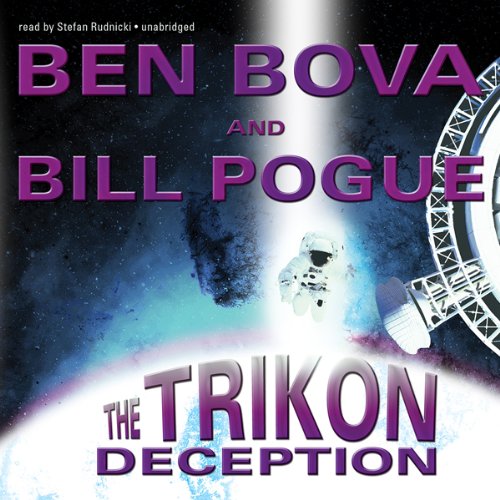 In the future as Bova here imagines it, Earth is an ecological nightmare, and humanity may well go the way of the dinosaurs. But overhead orbits salvation. A vast metallic island in space, the Trikon station conducts genetic research too risky to be done on earth - research that could save the planet.

Yet Commander Dan Tighe discovers that the Trikon’s major project is espionage. Its international crew is split into warring factions; its scientists - consumed by greed, lust, and drugs - run the lab for their own gain. Murder, intrigue, and romantic jealousy threaten to sabotage the station’s crucial work.

Ben Bova is a six-time winner of the Hugo Award, a former editor of Analog, former editorial director of Omni, and past president of the National Space Society and the Science Fiction Writers of America. He is the author of more than a hundred works of science fact and fiction. He lives in Florida.

What listeners say about The Trikon Deception

This is a good story by an excellent author with a decent performance that unfortunately has not been edited properly if it all. There must be at least 15 or more instances of the performer repeating sentence fragments that obviously should have been edited out of the final copy. It occurs so often that it makes listening to this book for any length of time longer than twenty minutes into an annoying tedious task that has one dreading the next jarring break in the narration.

Hopefully Audible will strongly encourage the publisher to provide a fully edited final copy of this production so that other people purchasing this title will feel like they got a fair deal for their coin and not a half baked copy of a story produced by a lack wit.

A decent story with some fun characters though the technology seems dated. An overall good standalone novel and mystery. Doesn't need any sequels and not Bova's best but worth listening to if you're a Bova fan.