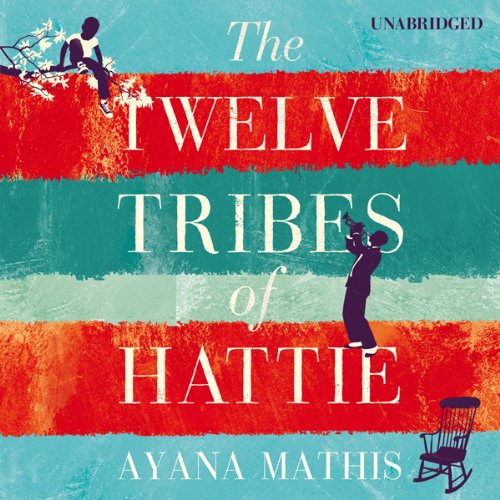 The Twelve Tribes of Hattie

“The opening pages of Ayana's debut took my breath away. I can't remember when I read anything that moved me quite this way, besides the work of Toni Morrison.”Oprah Winfrey.

Fifteen years old and blazing with the hope of a better life, Hattie Shepherd fled the horror of the American South on a dawn train bound for Philadelphia. Hattie’s is a tale of strength, of resilience and heartbreak that spans six decades. Her American dream is shattered time and again: a husband who lies and cheats and nine children raised in a cramped little house that was only ever supposed to be temporary. She keeps the children alive with sheer will and not an ounce of the affection they crave. She knows they don’t think her a kind woman — but how could they understand that all the love she had was used up in feeding them and clothing them. How do you prepare your children for a world you know is cruel?

The lives of this unforgettable family form a searing portrait of 20th century America. From the revivalist tents of Alabama to Vietnam, to the black middle-class enclave in the heart of the city, to a filthy bar in the ghetto, The Twelve Tribes of Hattie is an extraordinary, distinctive novel about the guilt, sacrifice, responsibility and heartbreak that are an intrinsic part of ferocious love.

“Ms. Mathis has a gift for imbuing her characters’ stories with an epic dimension that recalls Toni Morrison’s writing, and her sense of time and place and family will remind some of Louise Erdrich, but her elastic voice is thoroughly her own — both lyrical and unsparing, meditative and visceral, and capable of giving the reader nearly complete access to her characters’ minds and hearts.” (New York Times)
“The opening pages of Ayana’s debut took my breath away. I can’t remember when I read anything that moved me in quite this way, besides the work of Toni Morrison.” (Oprah Winfrey)
“A vibrant and compassionate portrait of a family hardened and scattered by circumstance and yet deeply a family. Its language is elegant in its purity and rigor. The characters are full of life, mingled thing that it is, and dignified by the writer’s judicious tenderness towards them. This first novel is a work of rare maturity.” Marilynne Robinson, Pulitzer Prize-winning author of Gilead and Orange Prize-winner of Home

Collection of Short Stories Around One Family

I just finished listening to "The Twelve Tribes of Hattie" by Ayana Mathis and the book was mostly different from what I had expected.

Expected: A novel that revolves around the family founded by Hattie and her husband.

Got: A collection of loosely connected short stories around the life of Hattie and her children, always showing a short period of time during a period of 60 years.

Maybe I should say first that I hate short stories. So still rating this audio book with four out of five stars comes as a surprise to me, some of the credit is due to Adenrele Ojo, Bahni Turpin and Adam Lazarre-White outstanding performance as readers.

By picking different points of time between the 1920s and 1980s, Ayana Mathis shows some changes in American society, some politcal events and developments, as well as how Hattie's life is going on.

The book starts with Hattie as a teenaged mother, being worried about her sick twin babies who eventually die. Hattie and her husband have many children after the twins but their life and their children's lifes remain bleak, sometimes more sometimes less so. Sometimes caused by external factors, sometimes by the characters themselves.

If Hattie's children had played more of role in all "chapters", instead of only appearing in their dedicated episode, I would have enjoyed the book much more - this is why I am taking off one star.

Wished it was longer

Would you try another book written by Ayana Mathis or narrated by the narrators?

Would you be willing to try another book from Ayana Mathis? Why or why not?

Yes, but I was a little disappointed in the story, each chapter was so different as it concentrated on each of Hattie's offspring. But it was impossible to get into the story as it was only a relatively short window in each of their lives. I suppose you learned about Hattie through her children but I would have actually preferred to learn a bit more about each child!

A couple of the chapters were slightly boring and unfortunately took a few rewinds before they 'caught'. Others I could have listened to for hours if they had been a whole novel.

Despite this, The book was well written, so I would try this author again.

The narrators were brilliant, I could clearly identify who was who, I could picture the characters all the more better

Did The Twelve Tribes of Hattie inspire you to do anything?

Nope, other than to search audible for another book to top me up before the next credit!

It's nice to have a book, going across decades withAfrican Americans folk as the subject. This helps open your mind on an area less publicised and for this I would recommend it.

It's not a happy book so don't go into it expecting it to be a great tale. The prelude drags you in, but it's probably the most interesting part of the book.