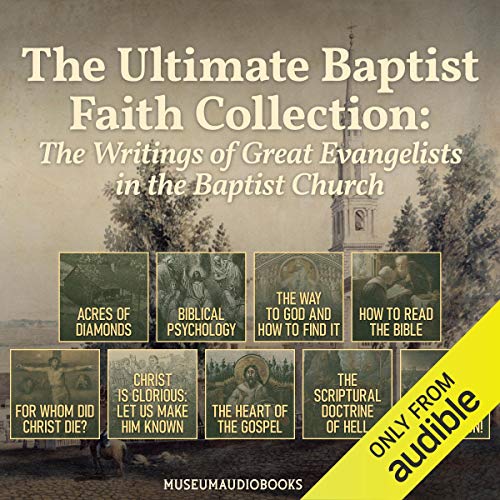 The Ultimate Baptist Faith Collection: The Writings of Great Evangelists in the Baptist Church

As an English-speaking denomination, Baptists originated within 17th-century Puritanism as an offshoot of Congregationalism. English Baptists migrated to the American colonies during the 17th century. During the 18th century, the Great Awakening resulted in the expansion of the denomination, and the conversion of many slaves to Baptist churches. Baptist congregations formed their first national organization the Triennial Convention in the early 1800.

The Ultimate Baptist Faith Collection: The Writings of Great Evangelists in the Baptist Church includes:

Book one: Acres of Diamonds. Russell Herman Conwell (1843-1925) was a Baptist minister, orator, philanthropist, and lawyer. In Acres of Diamonds, Conwell shows that success is a spiritual idea - the result of adhering to spiritual principles. Based on a speech originally delivered as a lecture to raise money for what would become Temple University, this book is about raising awareness of potential riches that exists around one, an idea which helps to broaden the individual’s perspective. The speech refers to the story of a man who sells his farm to travel far and wide in search of diamonds, when a rich lode of diamonds was, in fact, on the land that he had sold. Acres of Diamonds states the author’s core belief, that each of us is placed here on earth for the primary purpose of serving others.

Book two: Biblical Psychology by Oswald Chambers (1874-1917) is an in-depth examination of the individual’s personal relationship with God; the book explores various moral dilemmas and emotional complexities like fear, anger, shame, and selfishness. It shows the believer how to let redemption enter into the soul and to heal the wounds. The book serves as a theology of the soul is highly recommended for Christian counsellors, psychologists, pastors, parents, and teachers.

Book four: How to Read the Bible. In this 1879 sermon, Charles Spurgeon explains the proper way of reading the holy scriptures. He talks about praying, meditating, and being willing to learn from others. Finally, he warns the faithful against the false teachers.

Book five: For Whom Did Christ Die?. In this sermon based on Romans v. 6., Charles Spurgeon claims that humanity is sick, and that Christ died out of sheer pity for the ungodly.

Book six: Christ Is Glorious: Let Us Make Him Known was delivered on Sunday morning, March 20th, 1864, by Charles Spurgeon. Based on Micah 5:4, it deals with the glory of God and with the role of the church. Spurgeon exhorts the believer to "go out personally and serve with your flaming torch of holy example, and with your trumpet tones of earnest declaration and testimony."

Book seven: The Heart of the Gospel. The 13th-century Baptist preacher Charles Spurgeon explains the importance of atonement. He writes that the core of the Gospel is redemption, and the essence of redemption is the substitutionary sacrifice of Christ. Spurgeon states that those who preach this truth preach the Gospel in whatever else they may be mistaken, but these who do not preach atonement have missed the soul and substance of the divine message.

Book eight: The Scriptural Doctrine of Hell. In this 1878 sermon, the Baptist-Calvinist preacher warns that God knows how to hold the unrighteous for the day of judgment, while continuing their punishment. He laments the fact that "the threatenings of God are having all the thunder taken out of them", and that, "the fiercest onslaught has been made upon the doctrine of God's severity against sin". There is an awful doom awaiting those who die impenitent, having rejected the offer of the gospel of God, Archibald Brown admonishes in passionate language.

Book nine: The Pioneer of Destruction!. Archibald G Brown asserts that pride is, as Chrysostom called it, "The mother of hell". He notes that most destruction has come when humans try to be, or play, God - determining that this desire is at it's core "pride".

What listeners say about The Ultimate Baptist Faith Collection: The Writings of Great Evangelists in the Baptist Church

A Treasure of historical and Biblical wisdom.

Biblical principles that are ever relevant in the life, education, and spiritual growth of every believer and those that will be.