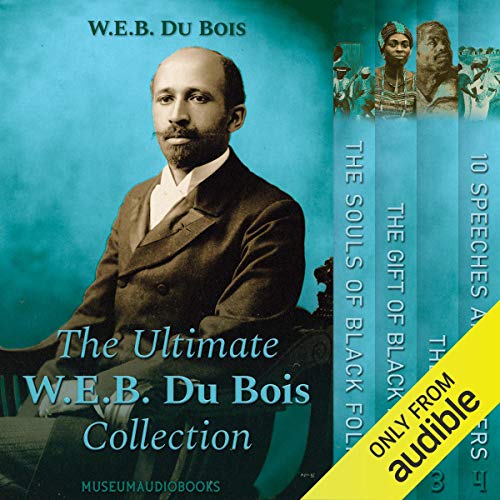 William Edward Burghardt Du Bois (1868-1963), was an author, scholar, sociologist, historian, Pan-Africanist, and civil rights activist. After completing graduate work at the University of Berlin and Harvard, he became a professor of history, sociology, and economics at Atlanta University.

The Souls of Black Folk (1903) is a pioneering work of sociology and a landmark of African American literature, comprising various essays on race, some of which had previously appeared in The Atlantic Monthly. As an uncompromising advocate of civil rights, Du Bois stated that through work, culture, and liberty the dual heritage of African Americans could be melded into a force for positive social and cultural change.

The Gift of Black Folk (1924) is an analysis of the role of African Americans in the development of American culture. The author provides examples of the ways in which the culture was shaped and enriched by Blacks on many levels, including their economic, religious, and cultural contributions. Also in his speeches and letters, Du Bois promoted the idea of a synthesis of racial and national consciousness dedicated to “the ideal of human brotherhood”.

Some of the frequent subjects include African history and culture, Black history in the United States and the world, the need for Black higher education to remain culturally relevant and scientifically sound, and the opportunities associated with Black economic cooperation.

What listeners say about The Ultimate W.E.B. Du Bois Collection