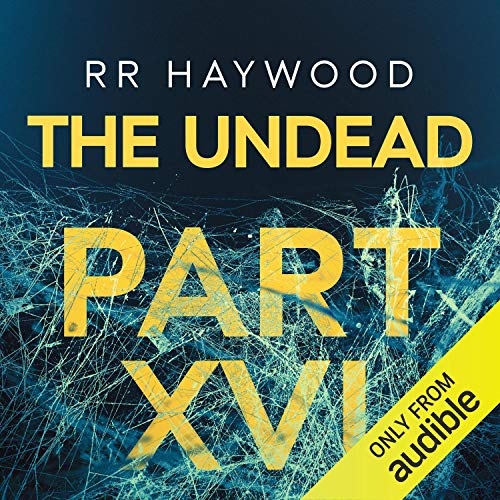 A new landscape was formed after the storm, and with it the promise of a new beginning.

Words were uttered beneath the Saxon while Howie fought the undead.

To be relentless and unceasing. To charge forward and never give up. To do what it takes to survive.

That pressure was building, and it became too much. Howie faltered, losing his mind as they ran through the fog and sought the doctors so desperately needed at the fort.

The final act was a simple one. A stubborn man spoke through an intercom at the munitions factory, and his words sparked such a reaction in Howie that he fell apart in front of those who love him the most.

The Undead continues with day 16.

What listeners say about The Undead, Part 16

Books 1-10 were amazing! I couldn't stop listening. Then in book 11 the narrator changed, which was a travesty, and the story became dark and depressing. I was so disappointed that I skipped from book 11 to this installment (16). It turns out that I didn't miss much. On the upside, the narrator finally performs Dave's voice better, however, his rendition of Reggie is like nails on a chalkboard. I'm not going to include plot spoilers, but I will share my opinion that the characters have devolved into 2-dimensional, predictable individuals who bare little resemblance to their originals. The story is no longer engaging, the attempted humor isn't funny (unless you like the constant juvenile homophobic jokes between Cookie & Blowers), and I have become so disengaged that I'm returning this audio book. On the flip side, you MUST check out R.R. Haywood's "Extracted" series. It is BRILLIANT in every way!! I hope he continues that series.

The best series since the Barchester Chronicles

Too many laugh out loud moments to count. Vivid characters. I await 17 with impatience.

Definitely one of my favorites, the story just keeps evolving and I’ve grown to really like Joe, can’t wait for the next one! Adore the characters and RR Haywood! We are pack!

Worth your time and money!

This is a really great story. As I said in the title of this review, it is definitely worth your time and money!

I am loving this series!! definitely a hard to put down type of book that I am thoroughly enjoying thank you Mr Haywood and Mr Jameson this has been a fantastic book and I can't wait to start the next one I will say you got me though at a few spots and I've always said there's no crying in zombies but I might have shed a tear two Now onto the next one

audio is lower than usual, audible might wanna check that out

here are some more words to get this review published

United Air Ruined my holiday. This book saved me.

Please don't fly United Airlines. They ruined my vacay. Howie and the gang kept me sane.

I laughed so hard!!

Yes, it took a few books for the narrator to get the voices right but he’s has them down perfectly now! He’s an amazing narrator and it’s a perfect match.
Yes, the series took a dark turn but it has to take that turn to understand the deeper story.
Yes, the humor is juvenile at times but that humor is central to the heart of the story. Don’t be a snowflake, just enjoy and understand why it’s important! I have never laughed so hard as I did in chapter 12 (chapter 13 in the audible readout) It was the middle of the night as I woke up my entire family laughing so loud and hard and I really needed that laugh and all the others through the series so far. Thanks RR Haywood!!

It’s a strange world and life is strange for our characters. So strange and so wonderful for us, the readers!

PS anyone who can skip books in this series and think nothing has changed with the characters and who calls them two dimensional should stop reading and reviewing books.

can we please get a movie version of this?

the story is brilliant the characters are awesome but when they changed the narrator's it starts to get a little difficult. Not going to criticize the narrator just my opinion. but seriously, can we please get a movie version with the cast from the peaky blinders maybe some of the guys from Frontier as well. but I sure do miss Dan Morgan.

Relisten whenever I run out of books. Each time I enjoy all over again. Good characterization, humor ,dialogue great. Waiting for next books. Reader is clear , full passion , expression. I am your best fan Mr Haywood. Thanks for entertainment and adventure. Please continue to do the right thing.

iffy storyline in this one

first of all, i have enjoyed books 1-15 despite a lot of harrowing detail. good story mostly well executed.
however despite the strong female characters as an older reader i sometimes wonder about some views discussed.
this was the case when one character tried to help a woman give birth.
first of all MOST BIRTHS GO WELL EVEN WITHOUT HELP. i fear for younger female readers sometimes. im amazed that anyone is brave enough to have kids the way birth is over dramatised every single time it comes up.
secondly- the life of the mother is always the priority at least in the west- unless the woman says otherwise. sorry but, good grief. we are not talking cattle here. I doubt even Roy nor Howie would be that daft.
am taking a break from these books now.
theres enough misogyny in the world, i dont find it entertaining.

This is a zombie apocalypse series. There I’ve said it.

Having got that out of the way I struggle to understand how some reviewers think this is plagiarism. Not sure how you copyright zombies.

I adore how this series has evolved and how it focuses on the characters as they evolve. To me as a reader I enjoy the 5 minutes of banter about very little as that in itself is thoroughly entertaining.

If you haven’t started already the extracted series is a must.

Keep writing, in me you have a fan

I'm on my second re-listen of these books, Haywood is a genius writer.
You laugh and cry, get angry at people, get disappointed in people, it's also great that it is pretty much correct by place,so in some cases you can go and walk the roads the battles were had in.
Just brilliant!

once again brilliantly written. hookies comments to blowers,had me laughing. I was so sad when blowers put his life on the line. I fumed with fury when Maddox acted like a twat,but hoped that he would make the right choice when it mattered. The humming and singing in the Saxon. Safe sex conversation with Dave ,and so much more. These people have become my friends,I feel as if I know them and sometimes I'm there with them. Great narration too. Dont know what I will do when it's all over!

Yet again R R Haywood has churned out another gripping instalment. I found it difficult at first to get used to the change in narrators but it didn’t last long and I’m so glad I stuck with it!

what can I say, a mixture of sadness, happiness, Spontaneous laughing, Hopefulness, Bravery, and just d*** right excellent. Thank you

The best books make you think or laugh or cry.
For me, Mr Haywood achieved all these in this book.
I look forward to more from him.
Thank you.

Starting to get a little repetitive.....

Even when characters die, you can kinda guess that something miraculous will save the day. Not that I'd want to lose anyone (we're all good buddies now), but still, there's a predictable pattern developing, and lots of money being paid for old rope.

Dave's voice has improved at last, so, thanks for listening to your audience! By the way, Autistic people are not cold or emotionless. Other people being unable to read our feelings is essentially no different from us struggling with neurotypicals. Communication is a 2 way street! ;-)

Wow. From start to finish it had me shocked and hooked. I'm trying to peice together the story and who has what role etc. and where does such n such fit in..... I love all the characters they feel so real to me, I absolutely love Joe's narration of the story his art at bringing the characters alive is amazing . I absolutely cannot wait to start the next book I need to know what happens next.

Loved it. The scene in boots cleverly using a fear that most people have to some extent. Could be hard for those with a phobia though. Gritty and again full of action.

Do yourself a favour

It honestly just gets better and better. I highly recommend this series to anyone