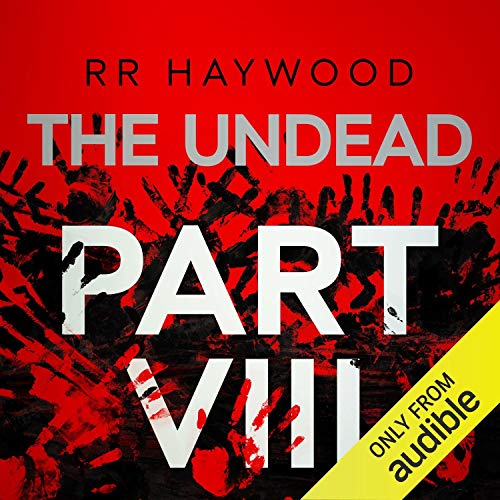 Howie and his group have been lured into a false sense of security by Marcy but are rescued by Dave. Does Marcy escape?

Maddox and his crew turn up to join forces with Howie, and we are introduced to Paula, an accountant who was working late when the infection came and was subjected to a horrific sexual assault, against which she fought back. And we follow Roy, an Olympic standard archer and hypochondriac.

The day escalates to a climactic battle, with swarms of the undead trapping and dividing the survivors at the top of an old car park.

What listeners say about The Undead, Part 8

I hate it when I discover a great new series and Audible hasn't caught up to the books. Don't start this series because I don't want you to suffer the agony of waiting for the next installment. The story is horrifying, funny, and heart wrenching. The narration is on point. I am warning you. You will become addicted.

THE MOST AUDIO AUDIO MISTAKES I HAVE EVER HEARD IN A SINGLE BOOK.

Another series that doesn't age well

To be honest it feels like the author is grasping for strings, yes the scenes with Howie and the lads are still very good but there is literally a 20 minute chapter of a grown women being scared of a spider, another character is a hypochondriac, 35 minutes chapter to introduce him where nothing happens. To be honest it's hard not to skip half the book and if you do that the book isn't worth the money you paid for it

Can't get enough of Howie, Dave, and their crew!

I love audiobooks and listen to many. This series is my favorite! The narrator does such an amazing job bringing these characters to life. The author has clearly defined the characters in a manner that makes you not only know them but love them too. These books take me through a whole range of emotions....I've laughed, I've cried, and I've gasped aloud many times. I feel as if I am right there with Howie, Dave, and the whole lot of them. (I'm American and I just wanted to speak like them!) It takes a very talented author to draw me in as R.R. Haywood has done. I am DYING to listen to Part 9! Please, Audible, release it soon!!

as always this book delivers. it's fun and always comes to an end too quickly. please keep them coming.

It is harder to justify each new purchase. The price should come down each time you purchase the next chapter/part.

This has to be one of the best zombie stories out here. Can't wait for next book.

Any additional comments?
As usual, this book deserves 5 stars in all categories. We meet two new characters, Paula and Roy. They make a great addition to the story. Both of them are very interesting people - Haywood has a great talent for creating interesting and likable characters. Paula is very smart and a good planner of traps for zombies. Roy is a hypochondriac who is uncanny good with a bow and arrow.

Marcy and the pretty girls try to pull a fast one on Howie and the lads. Dave cannot be seduced so he must save the weaker guys. Maddox and his boys come to join up with Howie and his people. There is another epic battle at the end of this book. It takes place at a car park and Howie is in big trouble. There is a part in this book about zombies going in concentric circles. Remember that because about nine or ten books later you will find out what caused the circling by the zombies.

Dan Morgan is one of the best narrators in the business. I love to listen to him bring Howie, Dave and the rest of the Living Army to life for me.

I love this series. .

This series is entertaining and keeps me wanting more! It has a new spin on an old story.. I have been a zombie fan since before it was cool to be... although I think he may have a dislike for Americans...lol.. this American loves this series though.. keep them coming Mr. Haywood

Another success! RR Haywood does an amazing job with character development really making you want to know and cheer for them. Dan Morgan breathes life into them. love this series! I hope that audible steps up their game and catches up.

Write about it if you must but at least warn the reader/listener. Such graphic sexual violence is disturbing and unnecessary and for survivors it can be incredibly damaging if unexpected. I am very disappointed in the author. I'm disgusted at both the use and lack of warning. Yes this is a horror story but there is absolutely no need for describing rape and sexual assault in such graphic detail. It does nothing for the plot or the characters. Dark is fine but a voyeuristic use of a true horror just to fill page space is appalling. I actually contacted the author to ask him to at least warn people and telling him about the effect it has on survivors but this was ignored. This has had a profound effect on me and not in a good way.

This feels like it's been rushed through a bit. As mentioned already there's some repeating which I thought was just me but a few more instances of background noise, narrator coughing and strange pauses made me realise this has been poorly edited in places.

None of that stopped me from enjoying this, it's still a brilliant series and I'm just about to start the next, can't get enough!

I hope the issue gets sorted by the time I come back and re listen to them and I hope it doesn't spoil the series for anyone!

There are some repetition incidents and stumbling by the reader, not the usual quality I have come to expect from the series. The story is as good as ever but the presentation is not. Hopefully this will be fixed at source and when I come to listen again they will be fixed.

... I would be bored by now, but far from it, still going strong ! I love how Haywood Ingratiates the new characters so quickly in this book with especially the quirky Roy that has had me laughing out loud.

Dan Morgan one of best narrators I've listened too, you can tell who is talking with just the slightest turn of tone or pitch.

Didn't think I'd still be listening at part 8 with such enjoyment. Especially not even blanching at the price tag each time in my rush to download.

There was one book that I struggled with and didn't think I was going to bother carrying on but glad I did.
Looking forward to what the new direction will be now...

This series is fantastic!

Would you listen to The Undead, Part 8 again? Why?

I have and would listen again. The characters are pure and relatable I find this rare in any kind of horror/zombie book.

What other book might you compare The Undead, Part 8 to, and why?

nothing compares to this...in a good way.

Which character – as performed by Dan Morgan – was your favourite?

cookie is brilliant, I have said it before and I will say it again 'bantz' ain't ma thang... but cookie is the exception.

Mr Haywood certainly has a bond with his characters and the series should not to be missed.

This series is great and totally gripping, can't wait to find out what happens next.

Real game of thrones style. You never quite know what’s going to happen next which is awesome

Such another good day from RR Haywood. It keeps getting better and better. With every part you fall more and more in love with Cookey and Blowers. Nick and Clarence. Dave and Mr Howie. The addition of more characters would seem daunting but you come to love them as well. Dan Morgan is as good as ever reading the books. If anything he makes listening to the books more enjoyable.

Without a doubt my favourite series. The narration is superb and the story keeps you gripped from start to finish. Only bad point. I've got to wait for ages for the next instalment.

As always pure class and escapism from Mr Haywood

Would you listen to The Undead, Part 8 again? Why?

Absolutely, the characterization is so good that we care deeply for them. I dont know anyone else who can get to the core of what makes us human than Mr Haywood

Paula, stands out in this one.

Cripes if i could write a tag line to do this book justice i would, i cant so i wont attempt it.

great story, great narrator and I'm so happy howie and his team are alive. not looking forward to a changed narrator in upcoming books. 😕

Just gets better. It can get a little predictable at times but still a great listen.