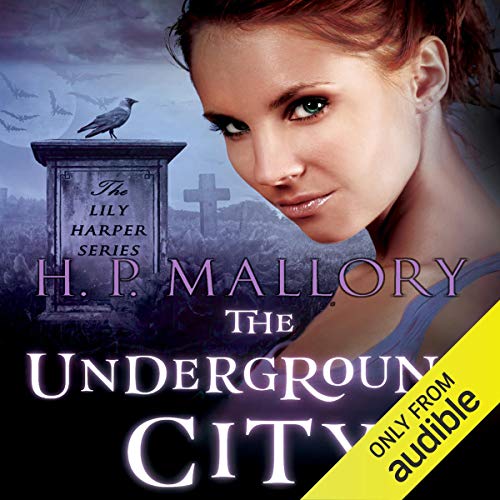 From New York Times and USA Today best-selling urban fantasy romance author HP Mallory comes The Lily Harper Series! If you like your books steamy (this is an adult fantasy romance, not for kids or teens!) and you aren’t easily offended by potty-mouthed, crass guardian angels, have a listen!

The Underground City is the second book in the Lily Harper urban fantasy series. The first book is Better Off Dead.

The Underground City: Abandon hope, all ye who enter here.…

Lily Harper narrowly survived her first mission as a Soul Retriever in the first level of the Underground City. After that harrowing trip, she wants nothing more than some downtime, but as with most things involving the afterlife, nothing ever quite works out the way Lily wants it to. Her newest mission will see her traveling to the sewer aqueduct of the Underground City and later, the prison. But, luckily for Lily, she’s got the hunky yet antisocial bladesmith Tallis Black by her side. And quite possibly unluckily for her, she’s also got her guardian angel, Bill, who’s up to his old, foul-mouthed antics. Between learning how to wield her sword, personal training with a hot-headed demon, traveling to the Underground City not one but two times, and discovering that the leader of the Underground City harbors a curious fascination with her, Lily’s hope was abandoned a long time ago.

I am enjoying this series and hope that Ms. Mallory will have the rest of the books on audible soon. The storyline is unique and it is the kind of story that I don’t want to put down. I can put myself into the story and that, to me, shows a good writer. The only thing I didn’t like was the Angel Bill using J.C. And C as curse words. He is supposed to he an Angel after all, albeit a unique one. I absolutely love the narration. The narrator does a wonderful job with the voices, accents and personalities.

I liked this one more than the first one.

I am very interested in where Lily and Tallis are going in the next books. I hope she can help him get out of his doldrums and back to enjoying life. I still can't stand Bill's inappropriate remarks. I just ignore them. I know most readers love him, I just find him too demeaning to women.

I just love everything that HP Mallory writes! She is incredibly talentes and I would recommend to anybody.

going so far down

The slide continues. She goes down under with her cast and crew to rescue another soul at great peril. Buckel in suit up the ride continues.

If u like Paranormal with a comedic twist, its a great listen! Great characters you can really get attached too.

LOVE THIS TRILOGY SO FAR!! Wish to hell and back was in audio I have to listen to it in the robot voice as I work, so not as satisfying but I'm sure I'm going to live the book as much as the first two

Narrater seems too young for character

I love HP Mallory and this series is fun and entertaining. I have a little trouble with the narrator though because she sounds like a little kid and seems pretty inexperienced. Her Scottish accent is actually not bad but I really think this series would benefit from a more mature or reader.

What did you love best about The Underground City?

Its a fun book. This definitely is not a "high brow" Rom/Com book, nor was it meant to be one. Its a fun romp through a story with likeable characters. Its easy to listen to with a few giggles here and there. The book is about a woman dying at the wrong time because her guardian angel wasn't paying attention when he was supposed to so an afterlife company offered her a job retrieving lost souls in hell.

I don't want to sound like this is a poorly done book, because it isn't. H.P. Mallory is one of my favorites. I just don't want people to get the wrong idea when they purchase this and think that its silly and want their money back. The book is well written and the characters are charming. This is the second book in the series and the characters are hitting their stride. The uneasiness/sexual tension between the two main characters is ramping up while the "guardian angel" is becoming a little less crude and a good bit funnier.

As much as I hate to say it, Bill was pretty funny in this book. Funny as in that little brother who won't shut up and you wish you could have left him at home but your mom said you had to take him and now he is embarrassing you in front of your friends but deep down your laughing your buns off at the things he's saying.

Have you listened to any of Betsy Hogg’s other performances before? How does this one compare?

I think she narrated the first book in this series so now your used to her narrating all the characters. This make it easy to tell who is who. Bill's voice is a little annoying, but so is the character so it works.

It gives you the giggles here and there.

Give the series a chance if you want something cute and light hearted. It has enough plot to keep you engaged, but you can put it down pretty easily and come back later. Its creative and well written. I like it a lot. If you like other H.P. Mallory books, you know her writing style so you will like this. If you are unfamiliar with her style, that's ok. Give this a shot. I think you will like it.

Just like with book 1, I enjoyed the story and the narration wasn't bad. The biggest problem I had was the "to be continued...". That is one thing that never sits well with me in books. I understand having to separate the story into separate books to make a series, but give me a bit of closure before ending it. I hate feeling like I am in the middle of a conversation that 1 party just up and walked away from. Needless to say, that won't stop me from trying book 3. I just hope the pattern doesn't continue.

Fabulous story let down by narration

What did you like most about The Underground City?

I love the sassy, flawed characters.

The angel, Bill is hilariously written. Much more "out there" than previous HP Mallory characters. I am loving this series. The tension between Lily and Talis is great, too.

The narrator is perfect for Lily, but it all goes out the window when she does accents. Talis's accent is dreadful. She can't decide between Scottish and Irish and somehow swings between the two - often in the one sentence. It's distracting.

I can't wait for more! (But a better narrator would be a good idea too)

This is the 2nd book of the Lily Harper series and it's definitely a much much better one. This continues the adve