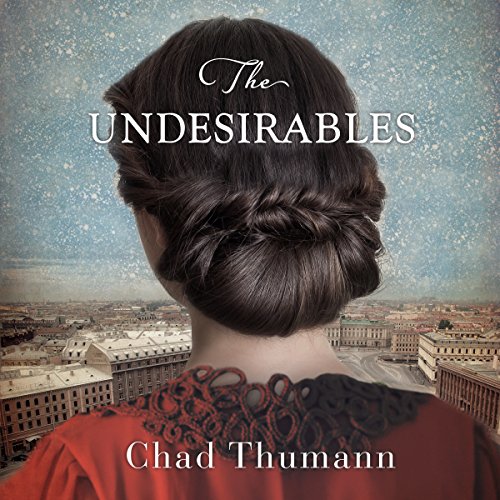 In the winter of 1941-1942, Leningrad is under siege, and Karen Hamilton, a seventeen-year-old American musician, finds herself trapped and struggling to survive. Throughout the city, people are dying of starvation and frostbite, and Karen knows that if she doesn't escape immediately, she will share their fate. If she has any hope of leaving Russia and reuniting with her fiancé, Bobby, in New York, she must do the impossible: cross enemy lines and then stow away.

On her harrowing journey, Karen encounters Petr, a young conscripted Russian soldier. She isn't sure she can trust him - he is equally wary of her. But as the two join forces in order to stay alive, an unexpected romance takes root.

Now, as Karen gets closer to the reality of escape, she has a choice to make: Will she return to a safe life in America with Bobby, or remain in war-torn Russia with Petr?

If you like romances - does he love me? does she love me? (rinse, repeat, repeat) then this novel might be your thing.

But if you think this will be a decent war novel with a plausible story line, then you will be sadly disappointed. Ridiculous plot holes, including: a) the U.S.'s assessment of Soviet strength is primarily based on letters between the two lovers where she mentions conditions in Leningrad, b) laughably lax security as our two main characters travel around wartime Russia, etc.

I loved this book. I could not wait to come back to it. I loved that it followed up with a historical notes, as well, discussing the fictional vs historical aspects of the story. I generally do not enjoy stories that switch perspectives, but this one was done particularly well. I felt as though it greatly enhanced the story to gain insight into each character's perspective.

Saskia does a great job with the performance, as well. I actually came to this book after doing a search of other books she had narrarated because I liked the last one of hers that I listened to.

Has an "instant classic" feel

This is a great read for adults, but I also think it would be great as a required reading book in HS. Thought provoking, informative, powerful, & engaging. Both male & female students would be pulled in.

The reader was just okay, I feel asleep many times while listening. I liked the overall story, but did not like some of the language and description on love scenes.
Also, it makes cheating on someone okay, which I do not agree with.

Made me want to research Russian history

Great listen and story. Highly recommend if you want a historical romance and more so since it is during the siege of Leningrad and you have 2 men on opposite sides who love you. What more can I say?

Wonderfully written captivating so much history of true war yet you couldn't help falling in love with the characters.

the performance was great, I'm a fan of the Audio performer now. the issue I had with this book was basically the character of Bobbie, he felt unnecessary and like he was added to be a plot device, everytime the story switched to him I was instantly bored, his segments were so short it was impossible to truly get to know him or care about him. I'm not a fan of characters added to be plot devices so that was my main sticking point for this book. the historical fiction nature and everything else about it was really good.

There was so much in this story about WW2 that I had never heard about before. I can’t believe that the government in Russia let it get so bad in Leningrad that people were actually resorting to canabilism. And it so surprised me that everyone was just going to give up on Russia because they had decided that they were a lost cause.
The detail & research that was put into this book was amazing and it will definitely be put on my read again list.

Another wonderful WWII story about a part of the war I knew little of. This one is mainly set in the Soviet Union. The audiobook was well done, though I did miss why Petr was referred to as the organ grinder and Bobby the choir boy. I came to care about the characters and wonder what happens to them after the end of the story.

This was a lonely departure from my normal science fiction, romance, and mystery genres. I found myself caught up in the historical world disciption. Feeling the poverty and struggle of the characters. However, as much as I truly loved this book, and I do mean cover to cover. I will not pursue another of this genre. It took alot out of me emotionally, but I will miss the rollercoaster. Well written Chad Thumman and Saskia Maarleveld. Well written. #romance #historical #tagsgiving, #sweepstakes