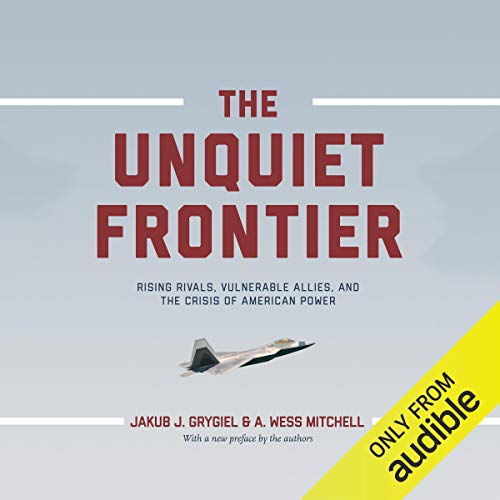 From the Baltic to the South China Sea, newly assertive authoritarian states sense an opportunity to resurrect old empires or build new ones at America's expense. Hoping that US decline is real, nations such as Russia, Iran, and China are testing Washington's resolve by targeting vulnerable allies at the frontiers of American power. The Unquiet Frontier explains why the United States needs a new grand strategy that uses strong frontier alliance networks to raise the costs of military aggression in the new century.

Jakub Grygiel and Wess Mitchell describe the aggressive methods rival nations are using to test US power in strategically critical regions throughout the world. They show how rising and revisionist powers are putting pressure on our frontier allies - countries like Poland, Israel, and Taiwan - to gauge our leaders' commitment to upholding the US-led global order. To cope with these dangerous dynamics, nervous US allies are diversifying their national-security "menu cards" by beefing up their militaries or even aligning with their aggressors.

Grygiel and Mitchell reveal how numerous would-be great powers use an arsenal of asymmetric techniques to probe and sift American strength across several regions simultaneously, and how rivals and allies alike are learning from America's management of increasingly interlinked global crises to hone effective strategies of their own.

The Unquiet Frontier demonstrates why the United States must strengthen the international order that has provided greater benefits to the world than any in history.

I'm glad I listened. There's no substitute for getting geopolitics direct from its practitioners. I got hooked and finished over the weekend. The authors know what they're doing. I worry this may be studied everywhere but in the U.S. until it's too late to use the guidance in it.

It deals with a subject within geopolitics called "allies." It's not an easy subject. Obvious to me, the authors spared no effort to research this and edit their work. Lots of stuff that's been in the news, it all makes sense to me now.

If one likes the ancient Greeks and Romans, Machiavelli, the pre-WWI British and The Godfather, this book puts the world on stage in an entertaining way. What we have is a crisis brewing that's going to be painful, but the book sheds light on what to do about it.

The thing about having an alliance network in the world is it's not static. The country, the federal government, has to continually manage it. But it gets mismanaged so often. Having allies is expensive, because a country has to perform in certain ways. The alternatives are more expensive.

I like the vocabulary, the way the discipline of geopolitics views events in the world and the delivery. The narrator was right for this type of book. It's probably a big hit in China. I loved it.