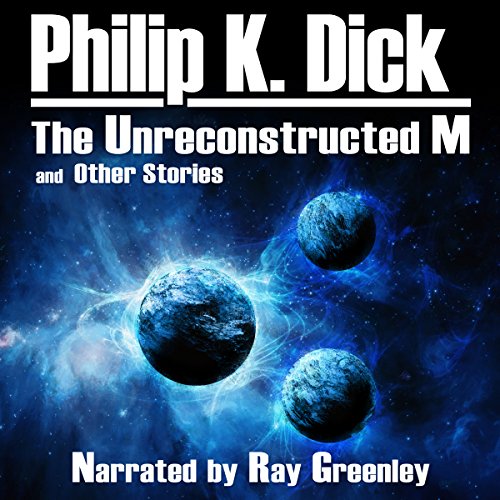 The Unreconstructed M and Other Stories

What if...a machine could murder one person while implicating another for the crime? An alien being looked like livestock but spoke like a philosopher? Earth was ruined by war, and Mars was humanity's only hope? Robots were created to wage an unending war on the ravaged surface of Earth while man hid underground? Peeking into the future showed a worse result with each look?

In The Unreconstructed M and Other Stories by master of science fiction Philip K. Dick, reality is as thin as imagination. Trust in your senses, your experience, and your expectations if you must. But be warned. What you do not know can leave you - and your world - forever changed!

TARGET AUDIENCE: Anyone who loves science fiction. These are a compilation of thought provoking short stories.

PROFANITY AND SEX: None, Thank you.

STORY LINE: A collection of short stories. Although a few years old these are terrific stories. They kept my attention and made my long commute a joy.

NARRATOR: The narrator was who really made these stories come alive. Terrific inflection, great accents, and good differentiation between characters.

OVERALL: I absolutely loved this book, and gave it a five-star rating. Would love to read more both from this author, and to listen from this narrator.

Yes. If you are a fan of short fiction of any kind this is a book that will be of interest. Philip K. Dick was a genuine legend.

Disappointment that there weren't more stories in it. It's a collection of short stories.

I hadn't heard this narrator before, but I must say that Ray didn't intrude on the stories which is a the sign of a very good narrator in my opinion.

Could you see The Unreconstructed M and Other Stories being made into a movie or a TV series? Who should the stars be?

Yes, though some would be hard to realise in TV format.

Great short fiction from the mind of a past legend. Very highly recommended.

*I received this book for free in return for an honest review.

As a retro sci-fi fan this really hit the spot

After finally getting the chance to get in some more PKD, I am very glad I did so. I enjoyed the variety in this collection. Some stories were sad, other raised very interesting questions.There is a definite “retro” feel to these stories (which I enjoy). This is of course because many of the stories were written many decades ago.I also came away with a bit of a “twilight zone” like feeling.

The narration itself was masterfully read by Ray Greenley, with clean and pure audio quality. Ray also does a wonderful job of making each character distinct, so you can better follow the story.

I am interested in hearing more PKD stories, especially if read by Ray Greenley.
Disclaimer: I received this title for free in exchange for an unbiased review.

Great stories by one of the great sci-fi writers.

Would you listen to The Unreconstructed M and Other Stories again? Why?

Yes I found the stories to be a great mix of traditional sci-fi with a good mix of horror and supernatural elements thrown in.

What was one of the most memorable moments of The Unreconstructed M and Other Stories?

There were several stories I really enjoyed, but my favorite was "Beyond Lies the Wup." It presents some interesting moral questions and I love the ending.

Have you listened to any of Ray Greenley’s other performances before? How does this one compare?

No I have not.

Who was the most memorable character of The Unreconstructed M and Other Stories and why?

This audiobook was provided by the author, narrator, or publisher at no cost in exchange for an unbiased review courtesy of AudiobookBlast dot com.

This book serves as a good introduction to Philip K Dick and the scope of his works. While I had read some PKD stories before, the majority of my knowledge of his work comes from his many movie adaptions.

As with many short story collections there are a mix of hits and misses.The collection ranges from the poor (such as "Strange Eden") through to the great ("The Meddler", "Progeny" and "Human Is") with many others sitting on the good to great side of the scales.
Thankfully this collection has a lot good or great stories than those that are bad.

This collection is kind of like a collection of episodes of The Twilight Zone or The Outer Limited. Short, self contained stories often with creepy or strange twists. The stories also cover a lot of topics. While most a science fiction, they also cover other genres such as horror ("Beyond the Door"), psychology ("Shell Game" and "Piper in the Woods") and supernatural ("Upon the Dull Earth"). It also covers some realistic dangers of technology ("The Defenders") and allowing robots to have too much control ("Progeny").

A lot of these stories are now 60 years old, and due to this they don't have the same 'kick' as they used to. The stories have been done again or something similar has been done, diluting the impact of their twists in the tail. Despite this they are still very entertaining reads.

Overall the collection is a 4.5 / 5 with the great stories far outweighing the occasional poor ones.

He does characters well - giving each one a distinctive voice so that it is clear who is talking and makes things easy to follow. There are times when the emphasis he chose for the characters doesn't seem to fit how I would have understood it. So a character sounds angry when I thought the words and context lent them more to them being confused.

Also his general narration comes across a little stiff and dry. The flow isn't quite right and it is almost a bit robotic (although different to his robotic voices, which are clearly robotic in sound).

I would listen to more stuff he has narrated, but I wouldn't say it is outstanding work either.

What did you love best about The Unreconstructed M and Other Stories?

These are old SiFi stories that do not get the attention they deserve, It is surprising that stories written in the '50s can sill be relevant. Mars colonization, discrimination, and endless war all issues we continue to deal with in the 21st century. Great stories.

What was one of the most memorable moments of The Unreconstructed M and Other Stories?

Each story has it's moment. So far "Beyond Lies the Wup" is my favorite story. great ending.

What does Ray Greenley bring to the story that you wouldn’t experience if you just read the book?

Ray has a great voice and is easy to listen to. He manages to add life to every thing he reads.

The totality of it. Again great stories that simply do not get the visibility they deserve.

l love short stories. in this collection something are better then others, but non are bad and the reader does a great job on all of them

Where does The Unreconstructed M and Other Stories rank among all the audiobooks you’ve listened to so far?

This is a great classic Sci-Fi collection.

Have you listened to any of Ray Greenley’s other performances before? How does this one compare?

Never listened to any of Ray's work today but his narration is superb.

I thoroughly enjoyed these short stories.

Where does The Unreconstructed M and Other Stories rank among all the audiobooks you’ve listened to so far?

It ranks pretty close to the top. I found each tale to be interesting in its own right and it reminded me of stories from the Outer Limits.

The science fiction aspect, whether it be based on pseudo-fact or pure imagination.

Which character – as performed by Ray Greenley – was your favorite?

I really like the way Ray Greenley had a different voice for each character. I was especially impressed by his variations of Russian and Irish accents.

Who was the most memorable character of The Unreconstructed M and Other Stories and why?

The bad thing about audio books is that I do not get to see the characters name in print, so they tend to escape me. I think it was Bentley, or Benson. It wasn't so much the character, but the situation itself.

I would recommend this to anyone who enjoyed Twilight Zone or Outer Limits, or just science fiction enthusiasts who enjoy audio books.

An Excellent Introduction into the Worlds of PKD

DISCLAIMER: I received this copy from the author, narrator, or publisher at no cost in exchange for an unbiased review courtesy of Audiobook Blast.

If you have never read any PKD, this is an excellent collection to start with! It provides a variety of short stories that range from supernatural horror to science fiction.

A word of caution, most of these stories are 60-odd years old, and feel dated both in social convention and reader impact. However, for many of these stories it was the first time a particular plot twist had been used! The collection is a very taut read and extremely entertaining.

The audio production is very clean, no muddy audio or obvious edits. Ray Greenley's narration is largely unobtrusive, allowing the listener to absorb each story without undue distraction. Occasionally the cadence sounded forced and stiff. I believe this was due primarily to Mr. Greenley's adherence to clear diction more that anything else, making it very difficult to fault. His characterizations are clear and distinct, and the dialogue, by and large, flows smoothly.

I recommend this collection to any avid reader of science fiction or horror, and will give special consideration to anything, regardless of genre, Mr. Greenley narrates.

I was not even aware these books existed. Great for workouts. Refreshing Narration.