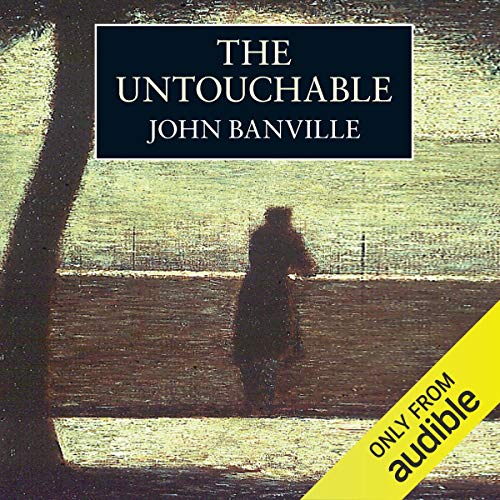 Victor Maskell has been betrayed. After the announcement in the Commons, the hasty revelation of his double life of wartime espionage, his photograph is all over the papers. His disgrace is public, his position as curator of the Queen’s pictures terminated… Maskell writes his own testament, in an act not unlike the restoration of one of his beloved pictures, in order for the process of verification and attribution to begin.

What listeners say about The Untouchable

This is my second try with John Banville. Once again, he impresses me with his ability to write nearly perfect prose and characters who are as flesh and blood and flawed as any who ever breathed, while completely boring me. That's strike two, Mr. Banville, and two is all most authors get from me.

Banville is a serious Literary Dude, and this is a serious Literary Dude's novel. The Untouchable is written as a memoir by one Victor Maskell, who is based on real-life Cambridge spy Anthony Blunt; although this is a novel, it's only loosely fictionalized history. Maskell, as he tells his story, was, like Blunt, formerly the keeper of the British royal family's art collection, and has recently been exposed as a Soviet spy since before World War II. Maskell is also a homosexual, which plays a large part of his narrative - he describes his sexual encounters with the same precise elegant prose as he talks about watersheds in history and his role as a Soviet double-agent.


"Everybody nowadays disparages the 1950s, saying what a dreary decade it was. And they are right, if you think of McCarthyism and Korea, the Hungarian rebellion, all that serious historical stuff. I expect, however, that it is not public but private affairs that people are complaining of. Quite simply, I think they did not get enough of sex. All that fumbling with corsetry and woolen undergarments and all those grim couplings in the back seats of motorcars. The complaints and tears and resentful silences, while the wireless crooned callously of everlasting love. Feh! What dinginess! What soul-sapping desperation! The best that could be hoped for was a shabby deal marked by the exchange of a cheap ring followed by a life of furtive relievings on one side and of ill-paid prostitution on the other.

Whereas, oh my friends, to be queer was the very bliss! The Fifties were the last grace age of queerdom. All the talk now is of freedom and pride. Pride! But these young hotheads in their pink bellbottoms, clamoring for the right to do it in the street if they feel like it, do not seem to appreciate, or at least seem to wish to deny, the aphrodisiac properties of secrecy and fear.


Maskell is wry, cynical, sometimes humorous, and a bit depressive, looking back on a career that's been generally distinguished while always overshadowed by these twin secrets: he has lived his entire life in two closets, as a homosexual and a double-agent. He has few regrets, and he seems as much amused as he is upset by his public disgrace, the shock of his friends, the shame of his family.

As brilliantly narrated as Maskell's story is, the problem is that it isn't much of a story. It's an old man reminiscing about being a young Marxist and a gay blade back when either one could get you hard prison time. There are no dramatic "spy" moments — even during World War II, he's just passing on not-very-important information to the Russians, until eventually he gets tired of the whole thing and rather anticlimactically (as much as a book that's had no suspense to begin with can have an anticlimax) drops out of the spy game. Then, years later, he's thrown under the bus by some of his former associates. (Figuratively, not literally; if anyone were actually thrown under a bus in this book, it would have been more exciting.)

Most excellently written? Yes. Banville wins literary prizes — go John Banville. Did I care about Victor Maskell and his whiny, cynical, misogynistic moping after decades of being a Soviet spy? Noooo. If you have a real interest in this era, particularly with a realistically (if not particularly sympathetically) depicted gay character, then you probably won't regret reading this, but don't make the mistake of thinking that because it's about spies it's thrilling.

I would like to say that Bill Wallis's narration is perfect. For capturing Maskell's dreary, bored-with-it-all sense of ennui-laced indignation, and lending the necessary distinguished British touch to Banville's prose, Wallis is perfect. However, he frequently lowers his voice to a near-mumble, practically muttering asides under his breath, so be aware that this book isn't a good one to listen to while driving, since you'll be straining your ears to make out what he's saying unless you crank the volume way up.

I'm old enough to recognize all the players.

If you do not know the background of the Cambridge 5 and do not recognize the characters from real life this may not make much sense.Blunt,Burgess Mclean etc, I LOVED the story and the narration.Warning quite a lot of homoerotica.

fiction/literature doesn't get better that this

A fictionalized retelling of the Cambrige-Oxford British elites, Anthony Blunt, Guy Burrgess, Donald MacLean and Kim Philby, who worked for years together as spies for Communist Russia. Told in the first person, stream-of-consciousness Joycian style by Victor Maskell who is Anthony Blunt. In the novel Maskel/Blunt reminisces for a his biographer after Margaret Thatcher has "outed" and disgraced him in Parliament.

I'm a Banville fan, but I think this novel may stand the test of time as his best. Hard to read more pedestrian prose after putting this gem down.

The reader who 'performs' the audible version could not be better; obviously an actor who understands everything about the book, story and Banville's sense of humor. Will definitely "read" it again.

Excellent match of narrator and text

Bill Wallis deserves every praise and thanks for his narration of The Untouchable.

His Victor Maskill is simply far more interesting than the Victor Maskill I encountered when reading the book alone; Wallis conveys beautifully the humour, snobbery and tragedy in this most engaging of characters.

If you are a fan of Banville, then I would recommend this without hesitation.

A nest of gentlefolk who spy

Bill Wallis's performance is perfect. He manages just the right hint of Irishness in the voice of an Anglo-Irishman of the Anglican ascendency origins educated at Marlborough and Cambridge, with that gentle increase in accent when he's recounting events that occurred in his native island. (This delighted me, it's just so natural for us Scots, too!)
I think I could have got too irritated with the unreliable narration of this deeply unpleasant protagonist if I'd just read the book; Bill Wallis made him human.
The prose, of course, is elegant and witty, the characters as exotic as Waugh's Flyte family, to postwar eyes. Or maybe not, thinking of our present government (no implication they're spying for Putin!).
Oh, what a tangled web we weave...

Here’s another new writer to me that, having read this really enjoyable book, I’m at a complete loss as to why he’s been lost to me. I read the earlier reviews and claims to Henry James, with some scepticism, but I was quickly disavowed of this and from the first settled into a really well written first person narrative that was sustained throughout the huge landscape of near historical London.

Anthony Blunt has always been a fascinating character - at the heart of Establishment and at the same time a betrayer who stayed true to the cause of Marxism. The clé to this romanà gets about as close as it would seem possible to get without actually transforming into a memoir - and I’d be interest to have a look at Blunt’s own work - but what fascinating source material.

The motivation - and peculiarly English - lack of a zealous driving force behind the perceived actions of treason and treachery provide the underlying motor for this portrait. The writing is rich, deep, well researched, authorative and kind. There are wonderful epithets and stand alone sketches along the way that I hugely enjoyed and will look for more Banville to fill up the months ahead.

Superb narration, but a rambling collection of memories with lacklustre ending

Bill Wallis' narration brings to life this excellently written book. Written as a series of recollections from the life of a Russian spy, in a vaguely chronological order, it fails to deliver the excitement that such a life would be expected to provide. The rambling nature of the narrative and the lack of fully thrashed out explanations could leave the listener disappointed. The story did not earn the tension and drama portrayed in the final scene.

When you listen to how Banville describes the process of writing you sense that most of it is done direct from an unconscious part of his mind. This then is possibly how he has managed to submerge himself into a mind of another. The prose reads like meandering thoughts but of course they are far more taught and agile than real life thoughts - however, that allows the reader to feel like an intruder, spying or gleaning the answers to the evergreen question why? For me, Banville's masterful approach has almost satiated my curiosity. My only sadness was that Kim Philby was not included. However, possibly this is more than compensated for by his fabulous depiction of Guy Burgess. Reviewers have also unmasked the cameo figure of Graham Greene, although some have remarked that there is only a very tenuous chance that Blunt and Greene ever even met, however who cares, it is such a perfect portrait of envy.
I have now listened to this book several times, and have also felt compelled to buy a hard copy. I love this book.

A remarkable fiction based on true events in the fifties involving the network of British agents spying for Russia, based in London. It is beautifully, lyrically written but nevertheless I found it distasteful. The characters, masterfully drawn , are repellent in their treachery, their callous, cold-blooded, sneering attitude to others, their constant drunkenness and depravity. While it is a compelling read, it did seem overly long, perhaps because there was so little to admire about these blighted souls. That said, I would read anything else by this author.


Bill Wallis’s performance is a triumph in the art of bringing a book to life. What a happy gift!

I haven't come across a Banville novel yet that I didn't like. It was made all the better by the great performance.

Simply the best book i have listened to in 5yrs. John Banville’s prose flows with beauty, energy, comedy and is visually perfect. It’s like a wonderful sensitive screenplay. And it is enhanced by the thoughtful nuance and narration by Bill Wallis. This is an absolute gem of a novel.