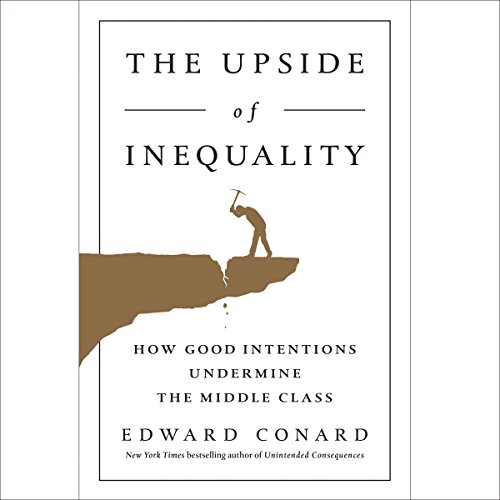 The Upside of Inequality

From the New York Times best-selling author of Unintended Consequences comes another bold and contrarian book by the man who famously defended capitalism and the 1 percent at the height of the Occupy movement.

Conventional wisdom says income inequality is rising and harmful to nearly everyone, and the rich are to blame. But as Ed Conard shows, anyone who can produce a product valued by the entire economy will find his or her income growing faster than those who are limited by the number of customers they can serve, such as schoolteachers, plumbers, doctors, and lawyers.

Consider Taylor Swift, the current queen of pop, who made $64 million in 2014. She earns more because her audience is huge, not because she takes anything away from the tens of millions of fans who happily pay for all those concert tickets, iTunes downloads, and souvenir T-shirts. Her ability to generate value can scale with the economy.

The same is true for others who improve the lives of millions, like Facebook founder Mark Zuckerberg and Apple CEO Tim Cook. The growing success of innovators doesn't hurt the rest of the workforce. In fact the opposite is true: Their success increases the demand for our middle- and working-class labor.

Challenging the arguments of liberal economists like Paul Krugman and Joseph Stiglitz, Conard reveals the truth about the income inequality panic. And by drawing on a historical study of the ebbs and flows of our economy, he proposes ways to grow the economy faster, which will benefit everyone on the income spectrum.

“Ed Conard challenges misconceptions that distort our economic debates. He debunks the myth that inequality is a conspiracy perpetuated by robber barons and sheds light on the complex economic phenomena that shape America’s success. Readers of all political persuasions will benefit from this highly-informative book.” (Arthur Brooks, president of the American Enterprise Institute)

“This provocative new book by Ed Conard is a must-read for serious students of economic policy. Conard’s core thesis - that advancement in living standards is constrained by risk capital and properly trained talent - suggests an inequality borne of returns from innovation. His solutions are sensible and all the more compelling in the context of this paean to risk-taking.” (Glenn Hubbard, dean of Columbia Business School and former chairman of the Council of Economic Advisers)

“Page after page, Ed Conard challenges conventional wisdom about the causes of growing inequality, the constraints to growth, and the feasibility of commonly proposed solutions to advance a thought-provoking blueprint for growing middle- and working-class incomes in a world with an abundance of workers. Whether you agree or not, this is serious thinking for serious thinkers.” (Mitt Romney, former Governor of Massachusetts)

What listeners say about The Upside of Inequality

Great Insight into the Cause of Wealth Inequality in America

Conard argues that the primary drivers of wealth inequality in America are the constraints on risk-taking and the lack of skilled labor. He goes into great detail as to how we’ve created an ecosystem that has become self-fulfilling. His contention is that we continue to exacerbate the problem in which we are attempting to solve through public policy, immigration and education.

Although you might be richer than me, you might be smarter than me, and you likely drive a better car than me, I'm not going to just swallow your redistribution is bad diarrhea, not feeling you. Now I'm only part way through this audiobook which perhaps I wouldn't have purchased if I knew how Republican it would be. But as of yet your notion that Germany is worse off than the USA etc. seems to be bullshit because they have universal health care and the only reason we have health care at all in the USA right now is because of Obamacare. Even if Germans earn less etc. if they have universal health coverage they are essentially earning more and so far your book ignores that. Will you mention it? Well you knew Mitt Romney so I'm guessing not. https://freedocumentaries.org/documentary/sicko#watch-film

Extremely detailed and an excellent read.

Some of the ideas here have hard to swallow implications. Really makes you think and then rethink. And then go off and read the counter arguments. I’ve rarely read a book that’s gotten me so curious about what is true.