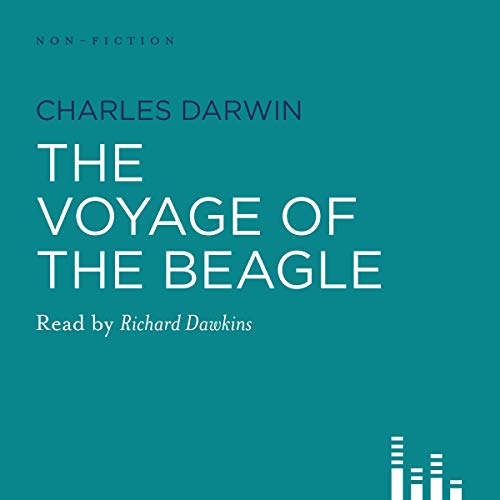 The Voyage of the Beagle

The Voyage of the Beagle - or, to give it its full title, Journal of researches into the Natural History and Geology of the Countries visited during the Voyage round the World of H.M.S. Beagle under command of Captain FitzRoy, R.N. - is much more than merely an account of Darwin's scientific observations in his 1831 - 36 travels across the globe: it is fine travel writing in its own right.

Voyage of the Beagle foreshadows Darwin's world-changing On The Origin of Species (also a CSA Word audiobook read by Richard Dawkins), in its constant intellectual quest. Darwin - still only in his early 20s - never just accepts what he sees, but wants to understand it; he shares his thinking in clear, entertaining, witty, even lyrical writing.

Professor Richard Dawkins, renowned evolutionist and author of ten books including The Selfish Gene, The God Delusion, and The Greatest Show on Earth, reads a carefully considered selection of extracts which makes Darwin's observational and logical genius accessible to a whole new audience.

Masterpiece on anthropology and geology

Absolute masterpiece on anthropology, geology and natural history. Audible allows you to relish such great piece of writings even when one is stuck in hours of traffic.

Glimpses of a great mind at 22

It is not news to anyone that Charles Darwin was a bright guy. One of the great minds of science, as we all know, and the iconic images of the man, with his bald head, long white beard, and serious expression, leave no one in doubt. But still I was surprised to know how intelligent and sensitive he was at the tender age of 22. The first entries in this selection show how much knowledge he had already mastered in geology, zoology, botany, anthropology. The reader / listener has the privilege of observing him in the act of making the connections that lead ultimately to the elucidation of evolutionary processes, one of the great intellectual feats of science and civilization. Darwin's meticulous natural history of numerous species of plants and animals are as fresh and as fascinating as anything written today. Of particular timely interest is Darwin's experience of an earthquake in Chile, which sounds almost exactly like the news reports of the quake there in February 2010. Professor Dawkins selected these particular passages and brings the exuberance of the young man alive with every sentence in his reading. I recommend this audiobook to anyone interested in Darwin, in evolution, or in Dawkins.

With Charles and Richard on the journey

Really fascinating. It illustrates the high academic standard Darwin achieved prior to his Beagle journey. His excellent diary style, acute observations added to by easy reading skills make this much better than I would have hoped. Richard Dawkins makes an excellent narrator and his own scientific knowledge obviously assists in correct emphasis and pronouniciation. I had anticipated some dryness and that a bit of endurance might have been called for but nothing of the sort. Lots of human interest, adventure and exploration with the added threats of sail and risks of the time add considerably to the readabilty. Well recommended.

This is an incredibly biased review and rating. I enjoy all of the books Dawkins have written and am fascinated by evolutionary biology. This book was a no-brainer for me. If you like Dawkins and Darwin, it will be a no-brainer for you too!

Yes. Intriguing story of Darwin travels to the third world. Helps one understand the development of his thinking and depth of his understanding.

Would you recommend The Voyage of the Beagle to your friends? Why or why not?

Did The Voyage of the Beagle inspire you to do anything?

Excellent book from a young Darwin

Have you listened to any of Richard Dawkins’s other performances before? How does this one compare?

Dawkin's is one of the best audio book readers out there and his British ascent works perfectly with both Darwin books.

This concise book is easier to read than the full version and Dawkin's does an excellent job reading it.

Exciting prelude to the Origin of Spieces

Dawkins is as much a eloquent narrator as he is a scholar. Really enjoyed this book as an insight to what lead Darwin to his great work. Also, this being a journal rather than a scientific work, it’s a great story on its own.

Fun, fascinating and a wonderful narrative

Really fun stories of Darwin across Latinoamerica, and with such level of detail you can travel with him. Also, it is fascinating how the observations shared in this book link to what became the theory of Natural Selection. Dawkins makes an incredible job. Enjoy it!

Dawkins Reading Darwin is Mana for the Soul

When you hear these words and realize they were penned by a 22 year old man who was really experiencing these things, it's almost surreal. I've now a strange desire to travel to Patagonia.

fascinating story, narration is incredible, all of dawkins audiobooks are fantastic, well researched and informative

What did you love best about The Voyage of the Beagle?

Insight into what Darwin experienced on this journey.

Darwin's vivid descriptions of the people, animals, plants, and land.

The narration of this book is fantastic, and the stories give an amazing insight into the understanding Darwin had and the cultural differences between regions of the world and the social changes.

Well written and super interesting. Recommend to all, not just for the descriptions of animals but for the colour of the whole world at that time

A very interesting first hand account of an amazing journey by one of our greatest minds. His description and hypotheses on geology, zoology and botany make up the most fascinating passages. This being a journal, there is no narrative or main thesis, so don't expect one. This book is not for the reactionary easily offended folks who love to call everyone a patriarchal racist. Stay away from this great historical document!