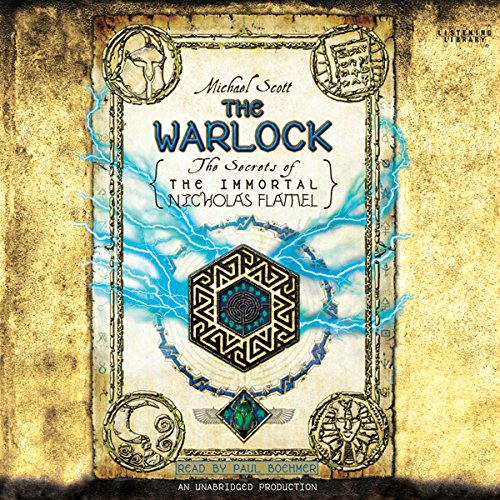 In the fifth installment of this bestselling series, the twins of prophesy have been divided, and the end is finally beginning.

With Scatty, Joan of Arc, Saint Germain, Palamedes, and Shakespeare all in Danu Talis, Sophie is on her own with the ever-weakening Nicholas and Perenelle Flamel. She must depend on Niten to help her find an immortal to teach her Earth Magic. The surprise is that she will find her teacher in the most ordinary of places.

What listeners say about The Warlock

The series "The Secrets of the Immortal Nicholas Flamel" is probably the next Harry Potter. Taking historical characters, Michael Scott writes an interesting story of two twins, Josh and Sophie, who take different paths as predicted by Abraham the Mage, the writer of a codex that contains all the secrets of the world. If you expect historical accuracy, then this book might irritate you, especially Scott's knowledge of early human history (Sumerian and Greek history falls short. I also don't know what to think about the witch of Endor. Scott may use historical figures, but definitely not in character as discribed in early sources.) However, if you are ready for an interesting adventure with some New Age/ eastern religious concepts binding fun, adventure and expectation together, you might just like this series. One thing I find irritating of Scott's writing style is his repetition of certain ideas almost ad infinitum, as if someone is going to jump in at the last book and not listen or read the others, or as if you are putting the book aside to read for two or three years, just to pick is up and read it again. I am not sure if young people has such a short memory span, though I think that might be an insult. Yet, when you travel with Josh and Sophie up to this point where even their aunt doesn't seem to be who she was all along and time travel brings a new dimension to the story, you would be interested in how it is going to end. I recommend this book for its fun and adventure but not for its historicity and sometimes sloppish writing.

Cliff Hanger -- Batter Up for Book 6

Book five brings many changes and pieces of information to the immense puzzle. The role of the fifth book is to setup the sixth, which it does extraordinarily well. The best part of this book is how many of the loose ends are now becoming woven tighter and more directionally to a conclusion. Although by the last page, you may have some hypotheses about where things are going, I think there are many different possibilities that you cannot discount. On to the sixth and last novel – the final battle is coming.

Dragging: may not finish series

I listened to the first books of the series; finishing 1 and immediately starting the next. I have been listening to this one on and off for about 2 months now. The storyline is getting bogged down with too many characters and simultaneous parts of the whole story that somehow are going to tie together. I planned to finish just cause I hoped to know the end, but after reading that this is only the beginning of the end, I may just scrap it. It is really dragging. I am no longer certain as to who is a protagonist and who is an antagonist. And honestly, right now important characters from the beginning are less important and minor characters have become important. At one point there were 6 different groups of people/ storylines to keep track of. I thought this was juvenile fiction, but I don't think my kid's could keep track of all of this. Even when I was listening regularly I kept wishing it was a book so I coul go back to remember,

Would you ever listen to anything by Michael Scott again?

Not sure, like someone else said, I think he is milking his cash cow and hoping to pull another few stories out of this series without a clear picture of where he is going.

What aspect of Paul Boehmer’s performance would you have changed?

The actor did a nice job. He has a nice voice to listen to.

Could you see The Warlock being made into a movie or a TV series? Who should the stars be?

Unlike Potter where 7 books became 8 movies, this story would need to be 5 - 8 books becoming 1 - 2 movies. Too much repetition and not enough action. You know the movie people would cut out huge chunks of the back story and half of the characters. Really not even sure who to care about anymore.

Better than potatoe chips...you can't stop at one! Exciting, engaging and entertaining from beginning to end.

A few mistakes in the narration, Hecate's name needs consistency, either "Hek-ut" as was apparently common around the time of Shakespeare, or the Anglicized Greek form "Hek-u-tee".

Not the best of the series but good.

I Love the series, and i listened to the last two books every moment i can because it was fast paced. Now it seems like the story is almost going a different direction. Some twists i was willing to accept because i know i was wondering how they would do this or that, but the ending cliff hanger is un acceptable to me. This book could have gone another direction, although there are still many good points to it. If you enjoyed the fast paced of the last books because they were on the run, then you might be disappointed with how its slowing down and they instead try to keep your interest with plot turns and "Wait, What?" moments. What brought me to the series is still there though, the mystery's of real life being explained in mythological ways which makes me enjoy it all and keeps me reading/listening.

A good and bad report...

This series is interesting and fun. The writing skill of the author is unquestioned and the narrator was superb, but when does this saga end? I've invested in 5 books and there is no conclusion to the story in sight. It's time to stop milking this "cash cow" and move on. I'm finished! Enough, already!

A little disappointed in this one

I loved the first four books and assumed the 5th would be the last but no Michael Scott continues to milk this cash cow. I got the feeling from this book that when Michael started writing he did not know how the story would end and is now making it up as he goes along. I found following multiple story lines confusing and the ending was totally implusable given the rest of the story. I may listent the 6th book but am starting to lose patience.

I love this story and it is the most action packed book so far! all the things come together and its heartwarming

This is the book where all the complicated moving parts start coming together to reveal the "aha," moments. Over all this was one of my favorites. The characters become deeper and more well rounded, and most of the suprises and twists really do suprise you. Especially the end cliffhanger, which I am a bit scheptical about to be honest. I'm sure the next book will of course make it fit in like a perfect puzzle peice as all the other twists have done. But I am hoping it is explained in a way that makes me smile instead of roll my eyes.

We have listened to this whole series and the books have become more and more convoluted as the series has proceeded. The books have progressively lost the storyline among many details, which are sometimes interesting, but cause the latter books to plod along with no real edge. This series is basically okay, but it is time the author tied things up and started something new.

The story gallops on as exciting and fast paced as the ones before with a very surprising twist in the tail! The narrator done an excellent job except with the Irish accent which would jump in and out of Scottish and something else. I enjoyed the added explanation at the end about the flying machines. All in all a good book I am happy to recommend as I go quickly now to the next book.

Great series. Enjoying it. My only very slight criticism is the change of accents for a few of the characters during the course of the series. Not enough to stop me enjoying this though. Fun, easy story and I’ve enjoyed listening to it on my daily commute. Last book about to start....

Brilliant addition to the collection and love how it links historical figures in history throughout the story. cannot wait for the next book.

This is a great series and the narrator is fantastic with not only the accents but timing and diction. I have enjoyed these first 5 books and with 1 to go find myself debating about the last one. To listen immediately or after dinner!!

So addicted to this series!

Such a great ending, can't wait to listen to the next book in the series!