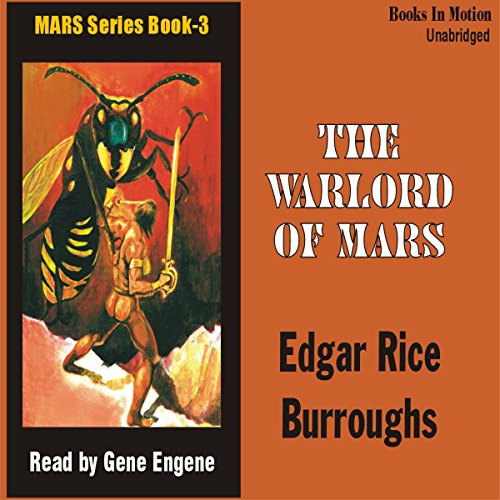 The Warlords of Mars

This is the third audiobook in the "Mars Series".

In the frozen wastes of Polar Mars lay the home of the Holy Therns, powerful and brutal rulers. Only John Carter dared to go there to find his lost Dejah Thoris.

Last and least of the trilogy

The third and final installment of John Carter of Virginia's adventures on Mars is the weakest. It's more of the same--a series of lightning-paced leaps from one brink-of-death peril to the next--as Carter travels from the South Pole to the North Pole of Mars (yes, literally) in search of his abducted wife, the Incomparable Princess Dejah Thoris. This time, though, there are none of the interesting "sidekick" characters that liven up in Books 1 & 2 ("Princess of Mars," "The Gods of Mars"). Characters waft in and out just in time to rescue our hero, then disappear to leave him alone at center stage.

Having introduced the Green, Red, White, and Black Men of Mars in the earlier books, of course there had to be a Yellow Race, and they show up here. Unlike the other ethnicities, however, the Yellow Men (and women, one presumes, although women are pretty much absent from this third installment, except for the Incomparable Princess who always seems to have just enough time to cry out "John Carter!" before being snatched away and abducted once again) have no interesting "back story," they are just men, good ones and evil ones.

It's a harmless tale, and at least wraps up John and Dejah's story happily-ever-after. Burroughs wrote numerous other books in this series, but they are "spinoffs" and not integral to this preeminent trilogy. This recording of Gene Engene's narration is of higher production quality than his rendition of "Gods of Mars" (which is by far the better book). The static and pacing issues that marred Engene's "Gods" reading have been fixed here.

it would be great if you had all 11 books

If you could sum up The Warlords of Mars in three words, what would they be?

What was one of the most memorable moments of The Warlords of Mars?

Which character – as performed by Gene Engene – was your favorite?

One of the best performances for the Mars series

I read this series when I was a teenager and still love re-read (or re-listen) to it. I new reader may find it a bit dated but I think that many of the characters and concepts are great.

I would not say that he is one of my favorite narrators but I think that Gene is the best narrator for this series that I have found. I can not stand to listen to most of the others.