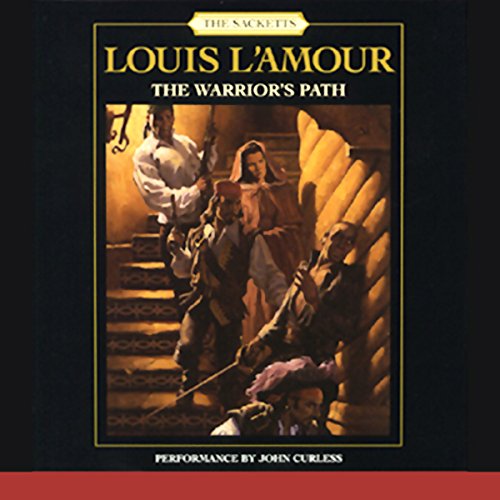 Filled with exciting tales of the frontier, the chronicle of the Sackett family is perhaps the crowning achievement of one of our greatest storytellers. In The Warrior's Path, L'Amour tells the story of Yance and Kin Sackett, two brothers who are the last hope of a young woman who faces a fate worse than death.

When Yance Sackett's sister-in-law is kidnapped, he and Kin race north from Carolina to find her. They arrive at a superstitious town rife with rumors, and learn that someone very powerful was behind Diana's disappearance.

To bring the culprit to justice, one brother must sail to the exotic West Indies. There, among pirates, cutthroats, and ruthless "businessmen", he will apply the skills he learned as a frontiersman to an unfamiliar world, a world where one false move means instant death.

"This story, like all of L'Amour's work, is great fun". (Library Journal)

What listeners say about The Warrior's Path

This is another good Lamour book. The narrator is the same from book one and two. He does a good job with the different characters. I was afraid that I would be tired of the story line after the first two books, but that was not the case. This book was just as good and kept my attention.

If you like the first three Sackett books you might also like books by G.A. Henty ("In the Reign of Terror" is a good one to start with or "The Cat of Bubastes".). Lots of history and adventure that's good for all ages.

A Good Western or A Good Eastern?

Amazing! A Western that goes Eastern and does it well. Another l'Amour twister that goes sailing off to the not too far East and returns with all the treasures sought got. John
Curless gives another flawless performance. Typical? Yes, for both author and narrator. Don't miss this one.......three high fives

This book will not provoke your literary curiosity. But it will provide enough action and adventure to maintain your attention. As one would follow some TV adventure series and look forward to each episode so would one enjoy the various travels and travails of the Sackett Family. After a short intermission with another novel or two, I will likely continue with the series. Cheers, Ken

Loved it! You shoul read the entire series! Louis LaMour is the best Western author.

This story predates the old West but has all of the strategy and action of early American Christian civilization. Educational and reflecting the values of the courageous society that preceded our own, listening will remind you of what men and women should be.

Makes me wish this was my family history! I hate to stop listening to the story.

loved it. the narrator was excellent. the story was great. keeping me excited for the next adventure

Absolutely amazing. This saga has gripped my imagination. I simply did not want it to end.

so..i am basing my review on this particular story..but comparing it to the previous two books IN the overall Sackett catalog. i am goonh to listen to the entire series this winter...hopefully. book one was a 5/5 for me...book 2 was a 5/5 for me...but this one did dall a bit short in my opinion. normally if i space off, or order a coffee, or miss a bit of story i instantly rewind and have a listen, i know that i do not LOVE a story when i dont feel the necessity to do that...among other things..but you know if you love a story or not.. i thought this would be anothet 5star for me because, being from tbe great northern forests of Maine,where the Kings Pine can still be found (they say), and loving tbe outdoors and enjoyi lng tbe more "campy - outdoorsy" type sagas, i guess i jist did not love it. of course, wanti g to read the whole sackett story, none can be skipped, so i press on! hoping the best for the next!
have a brilliant day people
also, the narrator is perfect..his subtlety with the small changes in dialect and annunciation of doff characters amd character types keeps the story humming along
JAB

Takes me into the story

It accessable well researched and fun.
This is part of a series which flows nicely, this one is a ripping yarn our hero is unfailing. It feels like Solomon Kane than a western but it works.