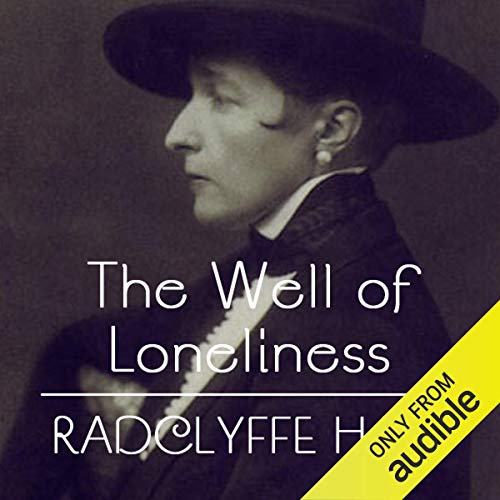 The Well of Loneliness

Stephen Gordon (named by a father desperate for a son) is not like other girls: she hunts, she fences, she reads books, wears trousers, and longs to cut her hair. As she grows up amidst the stifling grandeur of Morton Hall, the locals begin to draw away from her, aware of some indefinable thing that sets her apart. And when Stephen Gordon reaches maturity, she falls passionately in love - with another woman.
©1928 Radclyffe Hall (P)2009 Audible Ltd

Stephen Gordon has led quite a life — and yet also has hardly any life at all. Born into the very best a loving but rather average family can provide, she is fraught with a sense of her innate differences from the other girls. This classic late Victorian novel charts the developmental course of a “sexual invert”, from her childish crush on the housemaid, to her dangerous infatuation with the neighbor’s wife, to her efforts at settling down into whatever small happiness society would begrudgingly permit. Narrating the deeply delicate sensibilities of Stephen’s painful coming of age is Audible newcomer Cecilia Fage, a London actress and back-up vocalist who lends all her many talents to this very weighty and pioneering piece of literature.

Stephen’s own background permits Fage the use of her lovely and strong natural voice for the majority of the text, but when the main character ventures into literary Paris after being booted from the family’s countryside home by an unforgiving mother, Fage’s command of the French language and accent is entirely persuasive. There are also Irish ladies and lower-class British servants with quite convincing dialogue. Fage’s only weakness is the Southern belle next door, a loathsome and self-pitying creature who tortures the helplessly devoted Stephen — but missteps in voice work here are much more forgivable than the evil deeds of the character they represent.

As Radclyffe Hall’s most important work, and indeed one of the most important early calls for homosexual equality in general, The Well of Loneliness is here preserved successfully thanks to the formidable talents of Cecilia Fage. Whether you are looking to delve into this controversial book for the first time, or rediscover why so many people consider this heart-wrenching book a touchstone, the audiobook really loses nothing in the translation from page to Fage. — Megan Volpert

What listeners say about The Well of Loneliness

This is a book where the message matters more to the author then the tale. Minor characters are interesting and the heroine is a bore. The reader's breathy feminine pronunciation of Stephan's (Gertrude's) impossibly naive, overly dramatic text doesn't ring true. All other personages and accents are very well done and lively. It is a cold story without humour and sufficient depth of characterization. Lust, ignorance and anger melodramatically travel with the wealthy self absorbed world famous Stephan of London and end in the arms of self sacrifice on the dismal streets of Gay Paris. As a message, the unfair historically cruel treatment of homosexuals and the absolute necessity for change, it is an important one, and vital for humane understanding of people and nature. I would have been grateful to have found and read this novel at an early age, I think.

Great book. Didn't love the narrator, but I didn't notice too much after a bit because I was so into the story. Hall's writing is beautifully rich. Well worth a listen!

I tried to read this more than 40 years ago but I was an incredibly naive teen; I hid the book under my mattress instead. Now, it has a huge impact on me. Written in the late 1920s, the language is very delicate in referring to homosexuality but the psychological impact is so painful. The descriptions are rich and compelling.

I have a friend who has always been a homophobe. This book is something I can recommend because of the beautiful language and no in-your-face sexual descriptions.

The narrator uses British English so there may be an initial disconnect. For example, she pronounces "ate" as "et."

Educational, but I just can't relate

The descriptions were vivid and emotions are strong in the characters. They were flawed and well written.

However, I simply could not relate to Stephen. I was born sickly and developed determination as part of a coping mechanism and detest people who are physically strong but appeared weak willed.

So the part I like least is Stephen, but everything else was great. Which, seeing as s/he is the main character, made my position a little odd.

If there's a sequel I don't want to know about it.

Descriptions. The author's voice was a little too fast, but it was manageable with the audible software.

Did The Well of Loneliness inspire you to do anything?

Uh, no. It actually depresses me. Success and money does not make a person happy.

I don't have anything against Stephen in terms of sexual preferences or social standing. I just wish she would grow some self esteem. Self-sacrificial tendencies are so not attractive.

The Well of Loneliness is a personal favorite a

An excellent read and must have of any queer literature fan. by far my favorite

I fell in love w Stephan and Morton and Paris through Radclyffe Hall whose writing brought everything alive.

I lived in this book; could see the plush landscapes, the fine and not so fine homes, the people and their hearts.

This is a fine novel of what it was like in the early 1900s to be different and be in love. The writing is amazing in its fluidity and ability to paint a picture using the reader's mind as a canvas.

Worth the read, though a bit slow at times, hence the age of the book! I have to say I hadn't really thought about gay/lesbian history much, but I do now!!!

I can feel how important this book is for many "inverts" at the time. I wish it had a happier ending but those weren't invented for lesbians back then. It still felt very heartfelt.
The narration was so gentle and thoughtful, I loved it.

Great book for gays and those who love interverts.

Great book. worth reading. If you struggle with your sexuality. this is a must read.

This was one of those books I thought I should read but thought I wouldn't enjoy. How wrong I was. Although ultimately tragic, the main character is incredibly
enigmatic. A true heroine of her time.

The story itself wasn't horrendous, but I was shocked at how blatantly racist the book is as I've only really heard about it as a cult lesbian novel, with no mention of it's problematic side. I know it was written in a different time but the outright othering of the few Black characters ruined the book for me. I only read it as a lesbian right of passage, so if that's why you're considering it then I would say it's not worth it. The story is alright but nothing special. If anything it was a bit flat so even though it carries you in parts, I found it hard to invest in any of the characters. So that combined with the racism I'd say dont waste your time/money.

I hadn't heard of this novel until recently but I'm so glad I took a chance on it.

It follows Stephen, a girl born to an aristocratic father desperate for a son who translates all his hopes onto her. She grows up athletic and boyish but aware that she is a lesbian from an early age. We follow her through childhood to adulthood as she tries to navigate life as a queer woman in the early 20th century.

This was beautifully narrated and a wonderful character study of a woman who rejects femininity while loving women. Absolutely fascinating, I loved it.

The narration ruined this for me
It’s such a brilliant and important story.. needs to be told in the right tone

To know oneself and accept.

Enlightening insight into understanding ones otherness. To yearn for an acceptance not to occur until after your years are done. Learning that to love you sometimes have to let go.

Excellent story. Slightly disappointed in the performance which was a little weary at times. But overall good.

Highlights struggles women had to overcome!

I wouldn't say I adored this book as it was quite off the beaten track for me but that having been said, it was beautifully written and took me right back to that time. The wording was at times reminiscent of the great romantic novelists that came to mind, Georgette Hare, Jane Austen... just a lovely story, well written and beautifully narrated in a tender and sensitive way. I did feel the story lost its way a bit in the middle but it soon righted itself. I did enjoy this book however I do need to say, for me, , it was a measured read not a fast paced page turner.

Heartbreaking but well worth it

Very moving story, very much of its time, which makes me very happy to be living in an age of marriage equality, at least in some countries. Lots of food for thought. The narrator mispronounces a few words here and there but I still couldn’t stop listening.

I loved this story as a teen and have really enjoyed listening to it this time. It's a beautiful, and possibly very realistic, depiction of an upper-class queer woman around the 1920s. The main character, Stephen, is so real, so admirable and yet tragic. There are some incredibly spot-on observations and sublimely poetic passages scattered throughout. I cried just as hard this time at the saddest parts of the book too! Any fellow queers looking for a period-feel story, try this out!