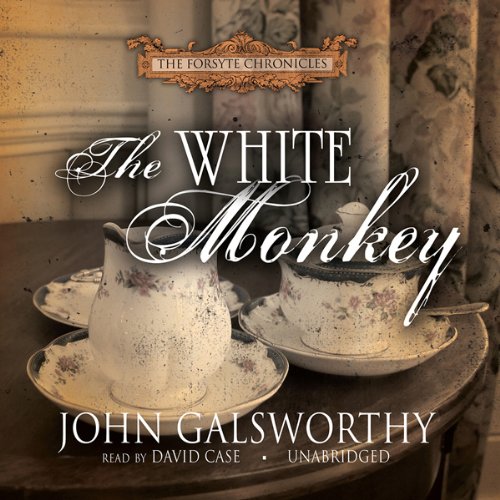 The White Monkey is the fourth of the nine novels in The Forsyte Chronicles and marks the opening of the second trilogy in the series, called A Modern Comedy. In this new chapter, Fleur and Michael Mont begin to question their marriage when their good friend, author Wilfred Desert, can no longer contain his passion for Fleur. Fleur finds herself torn between her love for Michael and passion for Wilfred.

Meanwhile, Soames Forsyte, as a director of the Providential Premium Reassurance Society, must root out the rumored indiscretions of a manager's dubious dealings with the Germans. The whole while, he is haunted by a painting of a white monkey with rinds of crushed fruit flung about it - and with eyes searching for something more.

John Galsworthy received the Nobel Prize for literature in 1932.

"A social satire of epic proportions and one that does not suffer by comparison with Thackeray's Vanity Fair...the whole comedy of manners, convincing both in its fidelity to life and as a work of art." (New York Times)
"[Galsworthy] has carried the history of his time through three generations, and his success in mastering so excellently his enormously difficult material, both in its scope and in its depth, remains an extremely memorable feat in English literature." (Anders Osterling, Nobel Prize presentation speech, 1932)

What listeners say about The White Monkey

The Younger Set--Not Quite as Interesting

The White Monkey is the fourth novel in Galsworthy's The Forsyte Saga. Soames is still with us, but he's getting on, and the story is moving more into the lives of Fleur and her husband, Michael Mont. Their marriage is threatened by a good friend's passion for Fleur, and Soames's financial stability is threatened by a bad decision made by the manager of the brokerage board upon which he sits. Galsworthy has brought in several lower class characters who are potentially more interesting than the extended Forsyte clan. Bickert, a clerk at Michael's publishing firm, is caught stealing books; he is selling them to provide for his young wife, Victorine, who is recovering from a serious bout of pneumonia. Their struggle to get by after his firing is more engaging than the Fleur's whining (although at several points I just wanted to whack Tony, who couldn't seem to get past his own pride to see how much his wife loved him). A second young clerk, Butterfield, is followed less closely; he is the one who broke to Soames evidence of the corruption of Mr. Elderson, the brokerage manager. Like Tony, he, too, is fired, but ironically, it's for his honesty.

While I enjoyed this novel, I don't find the younger set and their 'modern problems' to be as interesting as the old guard. Nevertheless, I will continue with the series. David Case is a fine reader for this social class.

This is the fourth book in the series of nine that make up John Galsworthy's Forsyte Chronicles. Its wonderful to have such a long series all read by such a great reader. David Case brings expression and life to the characters. I've read all the previous books and I can't wait for the last in the series to be released.

If you've read and enjoyed the Forsyte Saga and wonder if it's worth continuing on with the next three (or even the next six) books - IT IS! You can't abandon Soames now - you must see how he (and English society) develop.

I went though all nine volumes last spring while stuck in bed, recovering from an illness. Although I found the first four books the strongest, all were above average listens to me. They (and David Case/F. Davidson's narration) were balm to my mind and helped me better understand the social history of the time covered. I hope to find time to listen to all again some day.

excellent, although not as good has his previous

john galsworthy's books are timeless. his writing is smart, sassy and with that dry british humor that is so appealing. if you skip a page you probably won't miss any important plot developments, but you will nonetheless lose something in what makes his characters tick. his earlier saga is superior, but this sequel installment is certainly deserving of an audible listen!

A satisfying addition to the saga

I was elated to discover there was more to the Forsyte Saga. This, my first foray into the sequel trilogy, did not disappoint. We follow the story of Fleur as she navigates a marriage and the London "modern set" with her true love far away and lost forever. Can she make for herself a place in society that will satisfy, now that passion is irretrievable? And her father, Soames, stands at risk to lose his fortune in a business scandal. I liked this well enough to go on to the second book of the trilogy, The Silver Spoon, which I also recommend. For Forsyte fans this is a definite thumbs up!

A superb performance of the 7th Forsyte novel

A good read for anyone; for Forsyte addicts a sheer delight with some notable surprises. This story begins 2 years after Fleur marries Michael Mont as they both struggle to make a success of their somewhat unusual marriage. I found much to like in Fleur as she comes to appreciate her husband's good qualities and tries to become a better wife. Soames Forsyte, who still adores his daughter as passionately as ever, struggles to adapt to the changing ways of conducting business. Without his obsession with Irene since her relocation to America, his unflinching honesty and honorable practices in business, we have the opportunity to see a very different side of his character. It's easy to understand why he is the mainstay of the ever-growing Forsyte clan: Soames is the great rock upon whom his family relies to maintain its wealth and respectability. Without Soames, there would be no Forsyte saga. At the same time, he must cope with the social mores of British aristocracy as they conflict with his own principles. David Case captures the voices of the Forsytes and other interesting characters as well as the overall tone of the emerging Edwardian age. He never over-dramatizes, allowing Galsworthy's text to shine in its own right. Mr. Case is a true grsndmaster of his art and I look forward to many more of his performances.

A stunning read and a stunning performance

Entirely true characters that hook you in from the first page. I listened to the whole book in one day, a memorable one. Galsworthy deserved his Nobel Prize.

The story is great, and David Case's nuanced reading makes listening to it a true delight!

the worst narrator ever. the narrator overshadows the story. affected annoying voice. had to return the book.

The story is excellent but read with too much affectation for my liking. I'm afraid I'll have to put up with David Case's style of reading for the rest of the trilogy. Preview recommended.

Fashionable life in the 1920s

Gives a very good feel of life at the time, and the story grips you once you've got into it.