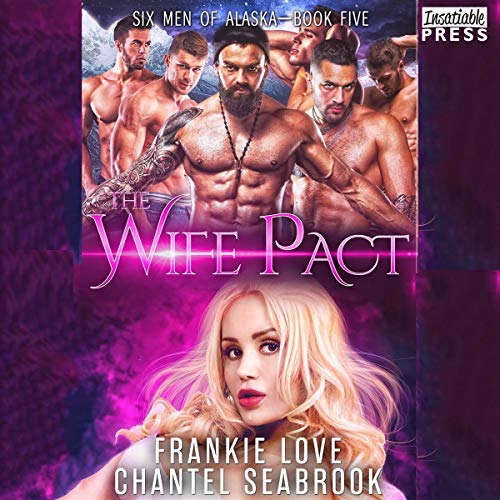 When an ultrasound reveals the truth about Tia’s pregnancy, the compound is riddled with fear. They know that it means one thing - death. Unless Banks can find a cure.

Stress weaves its way into Tia’s heart, and a break from the harsh reality is just what the doctor ordered. But a trip to Emerson’s family home reveals yet another hidden secret, and Tia is confronted with a shocking reality. The man she thought she knew so well has been keeping the truth of who he is from everyone.

Emerson has his own demons. Can he finally prove himself to the woman he loves? And will she learn to trust him before it’s too late?

The Wife Pact is Book Five in a six-book dystopian romance series, which must be listened to in order. The passion is high but the stakes are even higher. Tia and her rugged husbands are in the wilds of Alaska fighting for their lives - and for their love.

What listeners say about The Wife Pact: Emerson

So book 1 was good. Maybe even 5 stars, thanks to the original storyline, interesting little plot twists, and it's "should be ridiculous but sorta works here" 6-guy reverse harem theme.

By book 2, the steam was running low on the sex scenes...It was the same scene over and over...just with a different guy each time..., but the character development and plot twists still kept me interested.

But by book 5??? OMG. This story (and the writing) has become the most bland, circular ridiculousness. EVER. The entire book feels like a regurgitation of books 1-4. Like the writers kinda went, "meh...This sex scene worked well in books 2 and 4. Just copy and paste it into book 5 and change the husband's name."

it really is that monotonous.

Tia's continual whining and complete disregard for others...which is basically how the story began ...It just tiresome now. I couldnt care less if her husbands come to her rescue ...yet again.

I won't be buying book 6. The writers will earn my money again once they've stopped recycling paragraphs.

PS: the cover art does not match the character descriptions. The lead female is described with dark hair, at least two men have beards, etc.