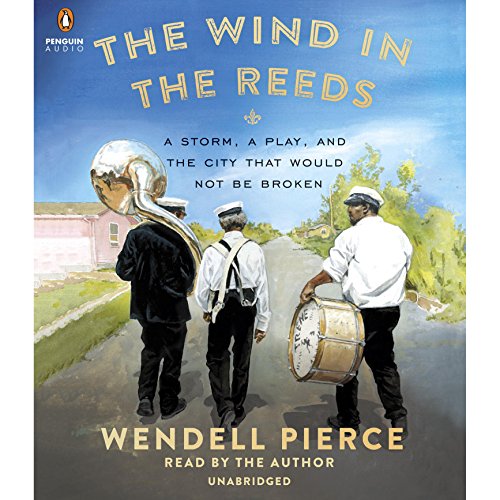 The Wind in the Reeds

From acclaimed actor and producer Wendell Pierce, an insightful and poignant portrait of family, New Orleans and the transforming power of art.

On the morning of August 29, 2005, Hurricane Katrina barreled into New Orleans, devastating many of the city's neighborhoods, including Pontchartrain Park, the home of Wendell Pierce's family and the first African American middle-class subdivision in New Orleans. The hurricane breached many of the city's levees, and the resulting flooding submerged Pontchartrain Park under as much as 20 feet of water. Katrina left New Orleans later that day, but for the next three days the water kept relentlessly gushing into the city, plunging 80 percent of New Orleans under water. Nearly 1,500 people were killed. Half the houses in the city had four feet of water in them - or more. There was no electricity or clean water in the city; looting and the breakdown of civil order soon followed. Tens of thousands of New Orleanians were stranded in the city, with no way out; many more evacuees were displaced, with no way back in.

Pierce and his family were some of the lucky ones: They survived and were able to ride out the storm at a relative's house 70 miles away. When they were finally allowed to return, they found their family home in tatters, their neighborhood decimated. Heartbroken but resilient, Pierce vowed to help rebuild, and not just his family's home, but all of Pontchartrain Park.

In this powerful and redemptive narrative, Pierce brings together the stories of his family, his city, and his history, why they are all worth saving and the critical importance art played in reuniting and revitalizing this unique American city.

“A must-read for fans of the two HBO television series that helped make the New Orleans-born actor a star... The Wind in the Reeds is Pierce's passionate, politically critical musing on the life-altering decade since Hurricane Katrina and the 2005 floods.” (New Orleans Times-Picayune)

“Part memoir, part history lesson, the book takes readers through Pierce’s own connection to the city and his role of a lifetime in the HBO series Treme. He spoke by phone about his book, the power of art and the process of rebuilding his hometown.” (LA Times)

What listeners say about The Wind in the Reeds

Wendell Pierce Shares His Soul and I Love It

Would you listen to The Wind in the Reeds again? Why?

This book captures the strength and legacy of the African-American family of the 1960s and 1970s. I don't know if we could recapture what they experienced in Pontchartrain Park, New Orleans. I do know that hearing it made me long for these experiences. I did not have them. I hope that this book will help those of us who love art bring the positive effects of art back to the family.

Wendall is entertaining and listening to him is a delight.

His mother Tee is number one because he goes back to her and her love all through his life. He grandparents were a close second.

Wendell is a trained actor with heart. His voice and inflection and personal share makes for a compelling experience.

I love audio books when people like Wendell Pierce and Ms.McCormick (reader for Hunger Games) bring the story to life. Please invite them to do other readings and let me know.

I laughed out loud. I cried over their loos. i rejoiced in his coming home. The historical references made me want to visit NOLA. Thanks Wendell. I am a fan.

I love the book, its strong on family values with Many stories connected with the author.
It started out with his up bring then breaking down every aspect of his life with a story relating it back to his up bring, and again his values.

Excellently told. A much more extensive story than the summary indicates, in a good way.

Love the book. Get in touch with a great city. Wendell you did a great job!

wendell Pierce has created art with this fantastic story. weabing his family into a global narrative for peacr rhrough faith.

A much enjoyed narrative of New Orleans - the gathering of historic artefacts and the emergence of jazz music and iconic musicians all piled into this story that touches the soul of the injustice and disinformation of past history of its creation.