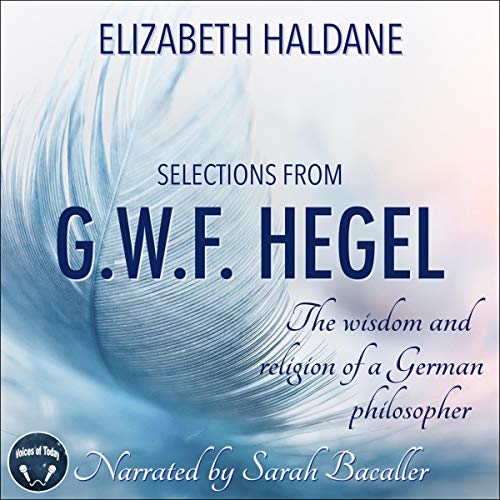 The Wisdom and Religion of a German Philosopher

As a compilation of notable fragments from the writings of German philosopher G. W. F. Hegel, this audiobook functions as a helpful and intriguing introduction to the keynotes of his thought.

The collection was edited by a fascinating Scottish woman of the Victorian era, Elizabeth Haldane. Prior to organizing the compilation of this text, Haldane (along with Frances H. Simson) translated into English Hegel's "Lectures on the History of Philosophy" in three volumes. Haldane also translated two volumes of Decartes' philosophical works, and produced numerous other publications. Haldane received the honorary degree of Doctor of Laws from St. Andrews University in 1906.

This audiobook, comprised of short selections from Hegel's writings and organized by theme, includes a preface by Elizabeth Haldane and a foreword by Sarah Bacaller. Each Hegelian fragment includes a reference to its original source for those who want to further pursue particular selections.

Although these are only quotations from they help dispel many of the popular misunderstandings of his thought. Elizabeth Haldane was an incredible human being

Sarah has a beautiful voice and makes listening to the timeless wisdom of this sage a very pleasant experience. I do hope she plans to narrate more of his works. May I suggest Hegel's Encyclopaedia Logic and Philosophy of Nature?

I'm definitely planning to get her rendition of his Philosophy of Mind.