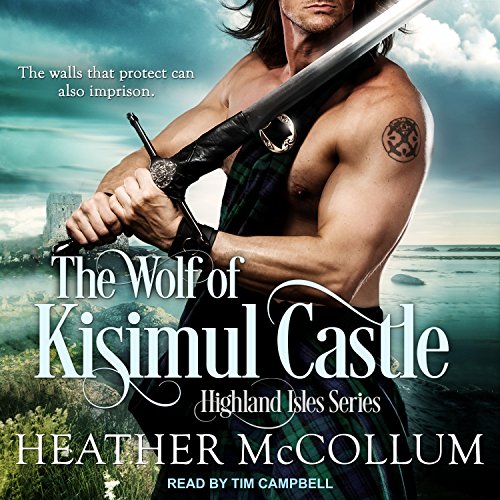 Mairi Maclean is kidnapped on her wedding day by the enemy of her dead husband. Taken north to the water-surrounded Kisimul Castle, she is held captive in the name of retribution. But The Wolf of Kisimul Castle soon learns Mairi is not a docile pawn in this game of war between neighboring Scots. Nor will she be frightened into walking down the aisle to wed the fierce Highland chief.

Alec MacNeil is set on revenge. When he finds his enemy dead, he takes his wife to replace the one that was murdered. An eye for an eye. A bride for a bride. But Mairi is more tiger than kitten and refuses to bend to his will. Set stubbornly against one another, the passion that flares between them threatens to tear Alec's strategy to shreds.

What listeners say about The Wolf of Kisimul Castle

This was a lot better than book #2 in this series. I really liked listening to Tim Campbell's narration. I would recommend this audiobook. Enjoy!😄

The book is well written and I really enjoyed the story but it was brought to life by the narrator! Tim Campbell did a wonderful job with the voices of men and women, young and old. I was very impressed!

Great addition to the series. Really enjoyed it! I would recommend this series. I’m going to the last one now!.

my favorite book of the series so far

this one was definitely worth the credit! Look no further through the reviews, buy it now and thank me later.

The BEST of the series

I have not loved a book this much since I read The Bride by Julie Garwood more than 20 years ago. Mari and Alec are both very likable characters and the chemistry between the two is palpable. The story and writing is fun and laugh out loud funny at certain points. If you do not laugh at the scene where he goes to see her for the first time after her week of "imprisonment", nothing can make you laugh. I found it extremely romantic as well. I just had a warm fuzzy feeling after finishing and wanted to listen again immediately, and isn't that why we read/listen to romance novels.

The narrator is pretty good, he grows on me more and more with each book.

Finally a good one like Lisa Kleypas. I’ve been searching for years. Thank goodness I found it

I love these stories!

I read the second book first, not having any of the others available (I have often remembered it). Then recently I discovered the whole series. Each book is well written with unique stories and unique characters, twists and turns. I'm very impressed with both the author and the narrator's skills.

Loved the hero and the heroine
Was a good book held your attention from front to back. Off to the next one.

This was the best of the series so far. I couldn’t stop listening. Romantic, adventure and funny. This is one of my favorite Scottish romance novels to date!

Another great and thrilling story with fierce characters male and female!! The narrator and the gift of many languages as well as good female voices. Thank you

The author has outdone herself with this book from the series, I haven't read the 4th one but still the hottest and sweetest story of them all
The wolf has 2 children and often I feel as the author doesn't know how to put the love story of a widowed father and someone else, but this one is so well done that I didn't even notice the story flowing
Also if I could I'd give a bigger rating for the narration because God knows how good he is that I don't even have words to describe
Definitely recommend this book and the others from the series