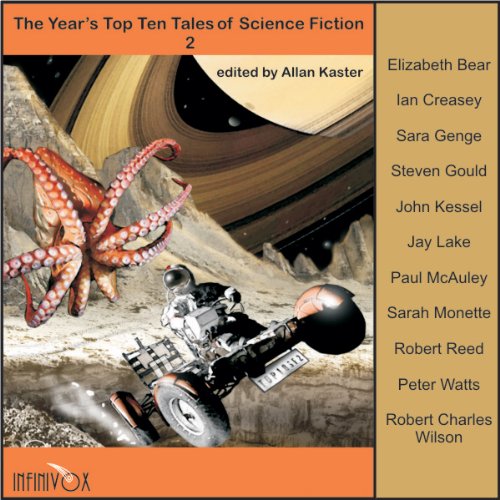 Here is an unabridged audio collection of the "best of the best" science-fiction short stories published in 2009 by current and emerging masters of the genre, as narrated by top voice talents.

In "Erosion", by Ian Creasey, a man tests the limits of his exo-suit prior to leaving a dying earth. In "As Women Fight", by Sara Genge, a hunter has no time to train for a fight to inhabit his wife's body in a society of body-switchers. In "A Story, with Beans", by Steven Gould, the role of religion in a dystopian future plagued with metal-eating bugs is considered. In "Events Preceding the Helvetican Renaissance", by John Kessel, a monk, in the far future, steals the only copies of a set of plays from a repressive regime and uses this loot to free his people. In "On the Human Plan", by Jay Lake, a mysterious alien visits a far-future, dying earth in search of the death of Death. Set in the Jackaroo sequence, in "Crimes and Glory", by Paul McAuley, a detective chases a thief to recover alien technology that both aliens and humanity are desperate to recover. Set in the Lovecraftian "Boojum" universe, in "Mongoose", by Sarah Monette and Elizabeth Bear, a vermin hunter and his tentacled assistant come on board a space station to deal with toves and raths. In "Before My Last Breath", by Robert Reed, a geologist discovers a strange fossil in a coal mine that leads to the discovery of a peculiar graveyard. In "The Island", by Peter Watts, a woman on a spaceship must decide whether to place a stargate near an alien society that will ultimately destroy it. "This Peaceable Land; or, the Unbearable Vision of Harriet Beecher Stowe", by Robert Charles Wilson, is an alternate American Civil War history in which the war was never fought, slavery gradually disappeared, and Uncle Tom's Cabin was never published.

I read and listen to a lot of short fiction. I love the genre. So much depth packed into such small packages, so much writerly skill to celebrate in that packing. I love the way it feels to be the reader as a story unfolds, explodes or morphs in my mind in only a few pages. I love the way my mind is later pulled back to ideas presented in short stories.

Not this time. All I can figure is that the editors of this anthology look for different qualities in short sci fi than I do. Listening to these stories I found my mind wandering. I didn't finish several because I just didn't care how they ended. And a few weeks after listening to this anthology, I only remember one of the stories and all I remember about it is its premise.

This is an unfair review in that way and should be taken with a grain of salt. I can't comment on individual stories, only my general takeaway. It could be that the stories I didn't finish were great, that I gave up on them too fast because other stories had disappointed me, and if I'd finished them I'd be saying, "Wow, you ROCK!" to those individual authors.

Nevertheless. My takeaway from the collection as a whole is a big fat yawn.

I think sci fi is a very difficult genre to do well in short form. The writer has to do everything a general fiction writer does, but has the added task of creating a world in which the story transpires. Still, it seems to me that the stories in a collection entitled 'The Year's Top Ten" should succeed at this as well as everything else a writer of short fiction must succeed at: believable characters, verisimilitude in action and dialogue, satisfying or troubling or otherwise worthwhile conclusions, yada yada.

The recording is low quality, at least on my device. Other a-books are crystal clear.