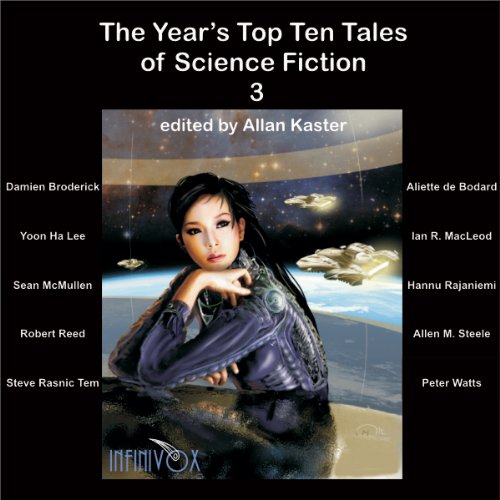 An unabridged audio collection of the "best of the best" science fiction stories published in 2010 by current and emerging masters of the genre as narrated by top voice talents. Stories in this year's collection include "Under the Moons of Venus" by Damien Broderick; "The Shipmaker," winner of the 2011 British Science Ficiton Association Award for short fiction, by Aliette de Bodard; Flower, Mercy, Needle, Chain" by Yoon Ha Lee, "Re-Crossing the Styx" by Ian R. MacLeod; "Eight Miles" by Sean McMullen; Elegy for a Young Elk" by Hannu Rajaniemi; "The Emperor of Mars," winner of the Asimov's Readers' Award for best novelette, by Allen M. Steele; "Alone" by Robert Reed; "A Letter from the Emperor" by Steve Rasnic Tem; and "The Things" by Peter Watts.

Would you listen to The Year's Top Ten Tales of Science Fiction 3 again? Why?

Yes, several of the stories were thought provoking and I would like to listen again and see if there was anything I missed.

The stories are well chosen and I thought the narrators did a decent job, although they came off a bit flat or uneven on occasion. However, the audio quality was just horrible. Everything was understandable, but it sounded as though the entire book was recorded over a phone using a mono tape recorder. I think this detracted from my enjoyment of the first story, but I got used to it. Overall, worth the money and the time. I will be looking some of these authors up for more.

Unbearable narration due to vocal tones

Some good some more mondane.

Good sci-fi explores the unknown. To me, good sci-fi explores concepts of space and time, and adds characters that hold it together. Sometimes profundity is obtained. Some of these stories had enough to be good sci-fi, some ( one in particular ) seemed to be trying to hard to be profound. About half way through, and although I hope to be delighted with some of the short stories. I have been quite satisfied so far with 2/3 stories. 'The Emperor of Mars' is read really really well !

Like all compilations of stories, there is a variety in terms of quality. However, this one leans toward high quality. There are some really great stories in this one - particularly Alone by Robert Reed, and The Things by Peter Watts which was a real surprise and which I had read before, but which was well done in this narration.... and several others that were memorable and original. The narrations are pretty uniformly well done too. This one is definitely worth a listen and worth the credit as the good outweighs the average and there really isn't anything bad. Fun to come across well written science fiction stories!