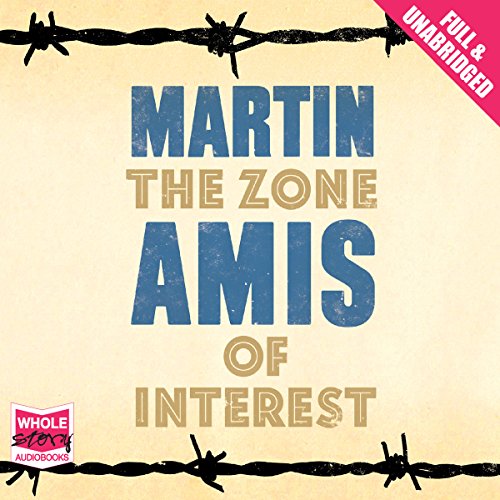 The Zone of Interest

What happens when we discover who we really are? And how do we come to terms with it? Can we even meet each other's eye, after we have seen who we really are? Fearless and original, The Zone of Interest is a violently dark love story set against a backdrop of unadulterated evil, and a vivid journey into the depths and contradictions of the human soul.

Praise for the author:
"An electrifying writer who likes to shock his fans and share his sharply contemporary concerns... Amis is a maddening master you need to read - the best of his generation" ( Mail on Sunday)

Amis I wish I had your mind

Excellent book true Amis
This is obviously a sad & grim subject matter
Though the Nazis are made to look grotesque ( as if they could look anything else!)
It's also wickedly funny in places
7 chapters each told from the perspective of ......
1 young blonde blue eye nazi who's uncle is Martin Boorman ( spelling)
2 a camp kamandant a repulsive man
3 a Jewish man who is forced to help in the final solution
The narration is great
Best book this year and I fly through books

I struggled to finish this. I found the story disjointed. The settings ran together and it seemed to take paragraphs to catch up to who was saying what and why. Too often was a thought left unsaid or said in too roundabout a manner. This can create interesting reading oifdone well but here it just leaves you feeling disconnected from the story. Extremely frustrating to have the story switch languages, to French of German, for phrases and expressions key to the story with no translation. The performance only exacerbated the cloudy writing style. Not nearly enough to distinguish the characters. Overall I found myself bored and frustrated.

I recommend this book very highly. Amis & Barrett are both on tremendous form.

An exploration of the dark side of human nature, scattered with moments of love and humanity.

A deeply dark story set in and around a Nazi death camp. The grotesque nature of life, where the everyday "job" is mass murder, is not for the squeamish. And yet, and yet....

Martin Amis has written a remarkable and compelling novel about a subject beyond most people's imaginings. This audiobook version is brilliantly read by Sean Barrett. Highly recommended..

This is a tough listen. Expertly told, wonderfully narrated, a hideously real tale from within a nazi death camp. Despite the painful images, you really must persevere with the story. I told myself it was important not to flinch from truth...but I feel scarred by this book.

You have to grit your teeth and get through it.

I don't think I am any closer to understanding why or how, but I feel I know more of the what.

There is no humour here. You will not be soft soaped.

A stench you will never forget

This is a difficult read/listen. Not only because of the subject matter, but also the structure of the book (narrated by three characters) requires your full attention to ensure you are keeping track. In addition a love story set in a concentration camp is a brave move, especially as the protagonists are the Kommandant's wife and a very active member of the Nazi war machine. Martin Amis doesn't shirk from describing the horrors and deprived behaviour, however it is the poignant moments, such as a small girl taking charge of her baby brother before being murdered, that will stay with you forever. Dare I say there is even some dry humour, for example the Kommandant's pathetic attempt to maintain authority while sporting two black eyes of dubious origin. Above all there is the visceral description of the overwhelming smell of rotting flesh and of Berlin, described as a city with halitosis. One again Martin Amis maintains his reputation as one of our leading writers and the narrator does full justice to the material.

I have to read the book now...

I always listen to books in the car and it was impossible to follow this story properly because of the reading style of the narrator: slightly mumbling and trailing off at the end of sentences. I will listen again under better circumstances.

To begin confusing then settled.

As usual the narrator was excellent.well done Mr Barrett. The story was okay once I got into it.

Worth a second listen

I liked the writing, it was very well written and got me thinking about a famous period in history from a different perspective - from the viewpoint of Nazi officers. What I didn't like much was the format as it was really confusing on audio to know who was narrating, and within these sections to know who was speaking.

He read the novel in a straightforward manner with some variation of style attempted, but sadly not enough for me to differentiate between characters.

I have not read anything by this author before and took a risk with this book which is described as a humorous take on the concentration camps of the Second World War. I didn't find it humorous at all, but I can see why people say that, because the central characters don't seem to take themselves seriously.

I usually listen to books whilst doing other things like driving, walking, housework etc. At first I was confused as to what was happening, but a quick Wiki search told me that each chapter is divided into 3 parts narrated in turn by a Nazi officer, a camp kommandant and a member of the sonderkomando. Their stories intertwine with life in the camp although there isn't much of a plot.

What I enjoyed was the quality of the prose, the way it made me think about lives of Germans in these extraordinary jobs and the way things were so topsy turvy like values, morals, behaviours. I've read a lot of non fiction from this period but think this book can reveal more than kommandant memoirs written by men in prison, facing death can.

What I didn't like much was the fact I had to sit and really listen carefully to follow what was happening. The beauty for me of audio books is being able to multitask. Also there was quite a lot of sexual content, although the author uses lots of German terms to describe body parts, and the reality of the camps was probably much more brutal than can be described in a novel.

This is definitely worth a second listen to get the full benefit of the quality writing.