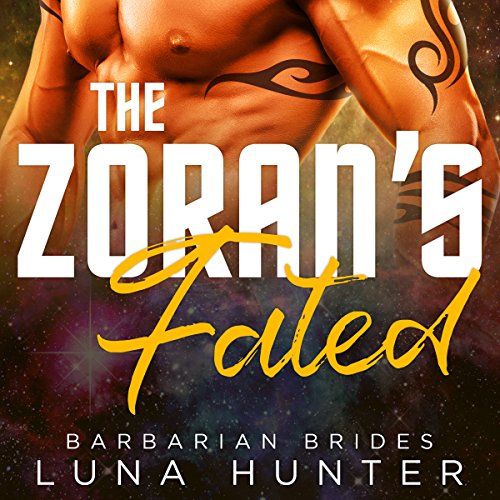 She is forbidden - and my fated mate. Lilith Rose is having one very, very bad day. The courier is delivering a package to a Federation spaceship when it promptly takes off - with her on board!

She unwillingly travels to the alien world of New Exon, where the ship is attacked by ferocious alien barbarians. One of the rugged alien warriors saves her life, but his brooding eyes tell her he wants more than a 'thank you'... Daruk is a Zoran Warrior and the best of his tribe. The golden-skinned, imposingly tall warrior has it all - except a mate. His tribe is building a new life on this alien world, far away from Earth's influence.

When the humans arrive, his tribe attacks... but when his eyes land on Lilith, his entire world changes. All his tribe's laws mean nothing compared to what he feels for the curvy human female. The warrior is faced with a choice: His tribe... or his mate.

The Zoran's Fated is the fourth book in the Barbarian Brides series, but can be read as a standalone. It's an insta-lust, fated mates romance, featuring a feisty human female who is in way over her head, and a brooding alien warrior who has to choose between his tribe and his fated mate. Happily-Ever-After guaranteed!

What listeners say about The Zoran's Fated

Thank you for the wonderful story. Full of action and adventure with a bit of hot sex!
The narrator is great and makes it come alive.
Really a good story and I am looking for the next one in this series.

This is the fourth audiobook in this series and I am afraid I really found it to be sort of average. There was a kind of flimsy plot and the heroine just matter of factory accepted she was on this alien planet and mated to a rather barbaric alien. The storyline was a bit flimsy, but if you have listened to the previous three stories it makes sense. Narration was done pretty well. Not my favorite audiobook.