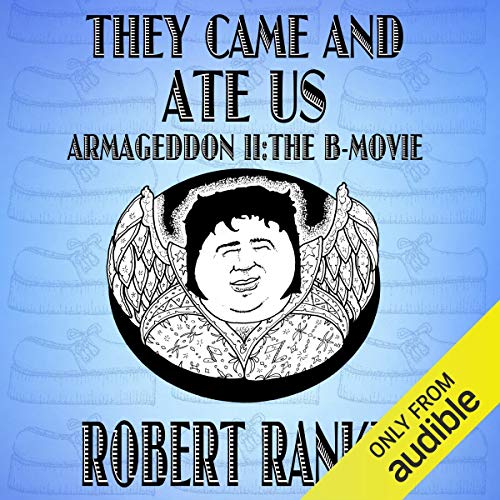 If there's one thing Robert Rankin doesn't know how to do, it's to let his foot off the accelerator. Picking up right where the first book of his Armageddon Trilogy left off, They Came and Ate Us, Armageddon Two: The B Movie is an unpredictable and zany ride into the year 2060. Supported by an eclectic cast including, but definitely not limited to: Elvis Presley; Jesus Christ; his twin sister, Christeen; and a boy genius who aspires to rule the world, this story will have you sore with laughter. Performed with an incredible commitment and wild energy by Rankin himself, this audiobook is a hilarious trip that can be revisited again and again.

In 1977 Elvis Presley faked his own death and set off on a journey into the future with his best friend Barry the Time Travelling Brussels Sprout. Mr Presley’s mission: seek out and destroy The Antichrist and save civilisation as we would one day know it. Good old Elvis! Things, however, do not go quite to plan.

There is a boy genius whose intention is to rule the world. The demon hoard known as Legion that has taken up residence in the internet. And the matter of the Big Flywheel, the clockwork mechanism at the Earth’s core that keeps the planet running on course. The Big Flywheel is grinding to a halt.

Meanwhile in 2060 Rex Mundi seems happy enough. He is married to Jesus Christ’s twin sister Christeen, has a talking hippy dog named Fido and a very nice house in the country. If it wasn’t for that great big spaceship that someone has parked on his lawn, Rex would have very little to complain about.

And so begins They Came and Ate Us, Armageddon Two: The B Movie, probably one of the most ground-breaking books Robert Rankin has ever written. A heady mix of extreme sex, violence, madness and mayhem, and like the first book in the sequence - Armageddon: The Musical - it is years ahead of the zeitgeist, this time in its use of Steampunk motifs.

Strictly for the over-eighteens and not something to give your granny for Christmas.

This is the novel that introduced one of Rankin’s most loved characters, Hugo Rune and his Book of Ultimate Truths to the world and is a work of literature where the “fourth Wall” is not just removed but thoroughly demolished.

“Stark raving genius...alarming and deformed brilliance” ( Observer)
“He becomes funnier the more you read him.” ( Independent)
“Everybody should read at least one Robert Rankin in their life.” ( Daily Express)
“One of the rare guys who can always make me laugh” (Terry Pratchett)
“To the top-selling ranks of humorists such as Douglas Adams and Terry Pratchett, let us welcome Mr Rankin” (Tom Hutchinson, The Times)"

What listeners say about They Came and Ate Us