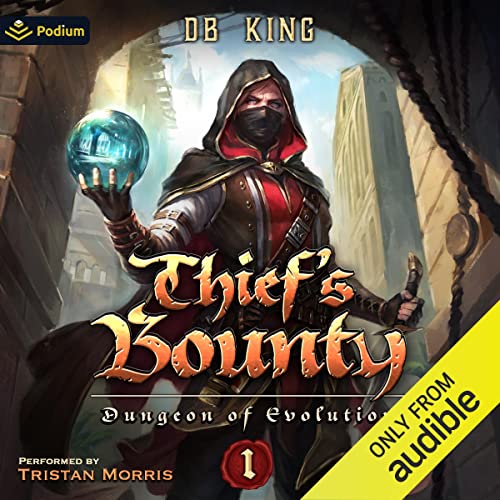 A thief with a bounty on his name steals a dungeon faerie. This one moment will change Kraken Island forever.

"Marcus the Exile" thought his life was done for, until he found a dungeon faerie with immense power on offer. Now, he's the owner of pocket dungeons that spontaneously evolve whenever items are left inside them. Scum on a boot? That's a monster. A sword left by an adventurer? You bet that's gonna be a monster.

But this power of evolution isn't just happening to the dungeon and its creatures, it's happening to Marcus, and anyone near the dungeon. No one knows why, least of all Marcus. If he's not careful, he might end up becoming the most powerful man on Kraken Island.

What listeners say about Thief's Bounty

I found it difficult to stay engaged and even though I'm at the end of the book I still haven't become fully immersed with the MC and the plot. this is probably the weakest dungeon core MC I've read about and I'm pretty sure I've listened to all of them on audible. the sad part is, it started pretty great. an orphan taken in by the powerful thieves, he works hard and becomes the best initiate then by chance is spotted by a guard and has to go on the run because of the bounty placed on him. he is an exiled prodigy with loads of potential set loose on the world. then it tanked. this trilingual weapon master can't find a better place to live and work besides an old sewer? the next problem i have is how weak and limited his dungeon powers are, he can't even touch the loot in his own dungeon even after defeating it solo. he has to scheme and negotiate others to give him money they won in his dungeon. what's with all the dungeon creation from positive feelings? thats stupid because who is deciding on what is good and what is bad you haven't made that part clear. overall the MC has potential but the poor writing has guided the mc into the roll of a shady fence instead of a powerful dungeon master able to make his own terms. I'm done with this series

I've hesitated for a very LONG time about buying this book. I like dungeon core novels but not necessarily dungeon masters.

However I'm very pleased to admit how incredibly wrong I've been for hesitating. This story was so incredibly awesome!

The narration...eh, only because the guy narrating the book was going a bit overboard with the dramatic pacing (it's not Shakespeare).

But other than that, great story! Enough that I pre-purchased the next book... 😂.